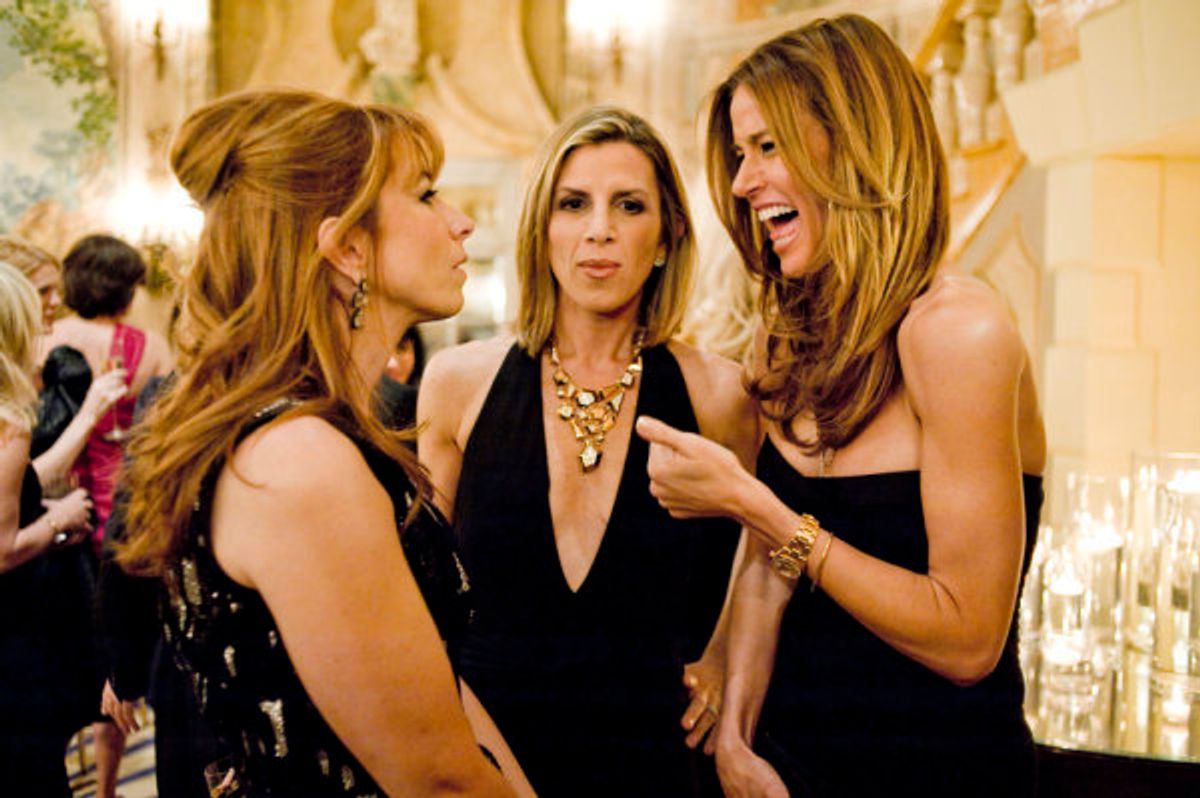 Reality TV has an interesting effect on the human beings who agree to appear on it. Some seem to flourish under the hot lights, unveiling witty quips or appearing genuinely crestfallen on cue, creating the sorts of robust personal brands that will lead to multi-tiered marketing strategies that include speaking tours, consumer product launches, and of course, more reality TV shows. Bethenny of "Real Housewives of New York City" epitomizes the sort of person who makes the unreal pressures of reality work for her personal brand: She and her BFF Jill Zarin had a huge fight in season 3, but Bethenny still emerged with a handsome fiancé, a baby, and two brand new BFFs (Alex and Ramona), plus bonus branding points for being Relatably Heartbroken all season.

But then there are the others, the reality TV stars who sweat under the lights and are often at a loss for words but cobble together some semi-aggressive nonsense out of desperation. Instead of alternately playing the hero and appearing vulnerable ("Women age 18-49 relate to vulnerability!" shout their marketing consultants), instead of valiantly sallying forth in life despite enormous challenges, they pick fights, lash out, become paranoid, implode, seethe, grind their teeth, turn the screw, break a heel and get something stuck in their hair. And, in some of the more colorful cases, their marriages fall apart, they get in violent fights with their boyfriends, they redecorate their luxury apartments to look like Vegas hotel rooms, they get drunk with Hooters girls, and their personal brands spin out of control, swerve off the road, and explode into flames. Yes, Kelly, Jill and LuAnn: We're talking about you.

Now, in the wake of the third season finale of "Real Housewives of New York City," you might think that the second group, those "Housewives" wobbly and flawed and genuine enough not to present a bulletproof brand to the cameras, would win our hearts and our empathy. If you think this, you haven't watched much of this show, and therefore don’t understand just how dramatically some of these women transformed themselves into gigantic losers overnight.

But maybe they were gigantic losers to begin with? It's honestly a little bit tough to tell. Granted, Kelly, whose words and actions most resemble those of an overgrown teenage boy, is a pretty clear-cut case of Wackadoo, as Bethenny calls it (and she writes on her blog, "I grew up in an insane asylum, so I can sense when someone is unstable from the beginning.") Kelly's meltdown on Ramona's getaway was truly epic, made great TV and proved beyond a shadow of a doubt that the real show here should be "Real Housewives of New York City on a Slow Boat to China," because the claustrophobic quarters and omnipresence of cameras that week resulted in some truly memorable panic attacks and enraged outbursts (followed by tears, furious texting to frenemy backup at home, rifling through enormous suitcases of string bikinis, etc). The low/high point had to be Kelly lashing out at the other women's stubborn insistence on discussing their emotions. Kelly expressed her disgust for feelings in general as "so 1979." (Oh my god. Remember 1979? Back when we had feelings? That was a good year.) According to Bethenny, Kelly's lashing out at the others repeatedly was only the tip of the iceberg. "Truth be told, what aired was very tame compared to what actually happened. I think that to air the full scope of it would terrify the viewers. We were truly terrified ourselves, and I must point out that none of us came home from that trip and told anyone about what went on there. We understood how serious it was and we were all scared."

But even Kelly's glorious crash and burn (or whatever we saw of it) couldn't touch Former Countess LuAnn's slow and steady decline this season. Somehow she went from being the only restrained, polite, reasonably well-dressed, dare I say borderline normal human being on the show to being a giant, flashy disaster in ass pants. Once, LuAnn attended polo games and brunches and she wore pretty hats and refused to indulge in idle gossip. Yes, she gave impromptu etiquette lessons to anyone who would listen and she was a big fake who never relaxed or managed to seem remotely human-like while the cameras rolled, but at least she looked pretty good and didn't fling poo with the other monkeys. Cut to LuAnn, whining that Ramona's husband called her "Count-less" in the wake of her divorce, curling up in Jill's bed and giggling like a coed on holiday, making googly eyes and necking with a deeply strange man, and – this is really the kicker – recording a "dance hit" with a cheesy producer, then lipsync-performing it for a fraudience. "Money can't buy you clah-hass!" LuAnn sang on Thursday night's finale, and a nation of women aged 18-49 thought, "Apparently money can't buy you talent or self-respect or a good producer either." It should be noted, however, that money can buy you a plucky boyfriend who looks like a French version of David Schwimmer and is just European enough to dance along to your terrible song without picking up on the deliriously cheesy nature of the whole event, thanks to its confusing resemblance to a really good disco party he attended in the Cote d'Azur one summer. Or, in the words of LuAnn's song, "Elegance is lear-hur-hur-hur-hurned!"

But even with Wackadoo Terror Cruise and Ass-Pants-Wearing Fallen Royalty in the cards, you have to give it up for Jill Zarin. Jill, who almost seemed likable last season, spiraled into madness in season trois. And listen up, lady friends, because Jill presents the classic case of The Envious BFF: She's your pal. She loves you when you're down. You weep and snot into her big shoulder pads. You can call her any time of the day. The more desperate and broken you sound on the phone, the more delighted and warm and helpful she is. She loves feeling needed, essential, sane. She loves playing mother hen to messy, needy chicks.

But once you straighten up and fly right? She hates you with the white hot passion of a thousand suns. You find your man, you get pregnant, you don't need her quite as much, and she goes straight to your enemies and whines about something totally below the belt, like "When my husband was sick with cancer you never called!" Now, pay attention here, because a true friend calls you and says: "My husband is sick with cancer. Why don't you ever call?" It's a conversation. You're busy running your personal empire and posing nude for PETA and blogging wittily, and she gets it. You're working out the last kinks in the contract for your next reality spin-off, "Bethenny Getting Married." (premieres next week on Bravo!). You're getting your big boobs stuffed into a fashionable top for your next "tell it like it is" voiceover session. Your BFF understands. She's a wee bit envious, sure, but she takes an extra yoga class and gets over it.

Not Jill Zarin. Jill tried to make Bethenny look like the lowest form of gutter rat for weeks, she refused to allow Bethenny to explain, apologize or even exist in the same room with her, she exploded in rage when Bethenny called, and she ran to the arms of – cringe – Ass Pants LuAnn for lots of fake kissing and bitching and moaning and plotting revenge. My God, remember when Jill put Bethenny on speaker phone when Bethenny was calling to sort things out, so that LuAnn could hear, too? You don't? Boy, you really should've watched this season. I'm serious. It was like when Mr. T stole that taco truck on "The A Team" and he almost ran over a hooker and a hot dog vender but then he rammed the truck into that criminal carrying a big bag of cash, and the cash floated all over the place as Hannibal growled "I love it when a plan comes together." Except in this case, Kelly was driving the taco truck, and she killed a few pedestrians, whom she referred to as "evil bitches" when she texted Jill a few minutes later at a nearby Starbucks.

God I love this crazy show. The third season was a trillion times better than the first and the second combined (many episodes of which amounted to elaborate infomercials), and let's be clear, the New York housewives are a trillion times more interesting than the Orange County, Atlanta and New Jersey housewives combined. Sadly, though – and perhaps this is an omen of things to come -- Thursday night's finale was pretty dull. Ramona got her hair cut, put on a fancy white dress and wept as she told the cameras and the guests in the room how happy her stupid husband Mario has made her for seventeen years now. Or, as Kelly put it, "The whole thing was so concocted. Seventeen years? I mean seventeen is such a random number. But if I were doing something, I'd want her to just come, I wouldn't want her to judge me. So I decided that I was going to be the bigger person, again, and that I was going to show up." Kelly, at 6' 5" or whatever you are, aren't you technically always the biggest person?

The Housewives are now divided into two teams: Team Jill includes Jill, LuAnn and Kelly, Team Bethenny includes Ramona and Alex, and new-girl Sonja (who is self-deprecating, fixated on sex, and possibly gay, all of which make her far more human-like than the others straight out of the gate) is leaning toward Team Bethenny. And then there's possible addition Jennifer Gilbert, who appears willing to say nasty things for the camera, and therefore may be necessary to create more chaos and emotional flameouts that are really thinly-veiled branding opportunities next season. Until then, we can only seethe and grind our teeth and long for more.