Where are the World Cup condoms? 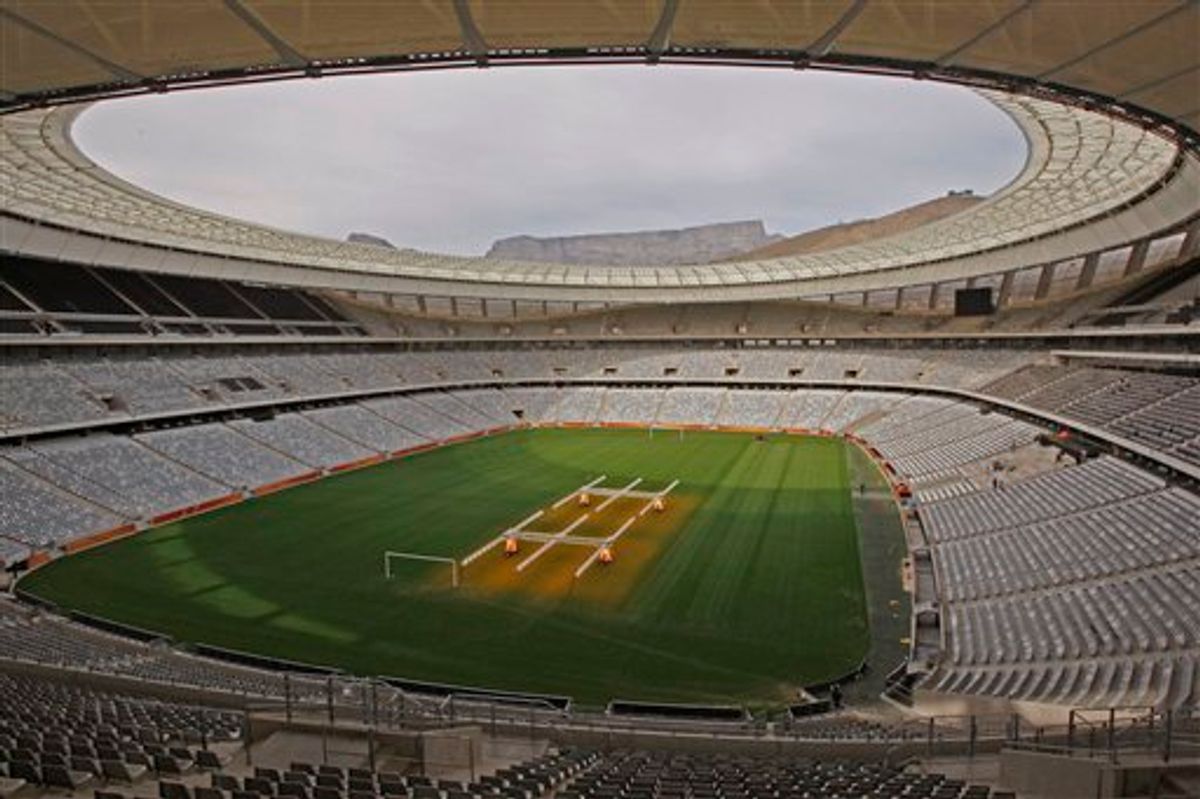 After months of handwringing over the potential for the World Cup to spark a public health crisis in South Africa through the spread of HIV, activists are claiming the games' organizing body has blocked handouts of condoms and safe-sex pamphlets at stadiums and other official venues. "To date FIFA has not permitted any civil society organisation to distribute HIV- or health-related information and FIFA has not provided any written confirmation that condoms may be distributed at stadia and within the fan-fests," said a joint statement. "This is despite the fact that commercial sponsors selling alcohol will have dedicated spaces available."

To begin with, South Africa has the world's highest HIV prevalence, with roughly one infection in every five adults. The World Cup will send some 450,000 soccer fans, most of them male, into the country -- and, well, you know soccer fans. And men. The popular assumption has been that all that unbridled masculine energy on the field and in the stands will spill out onto the streets in search of sex. Local prostitutes are certainly banking on it, and FIFA organizers have predicted -- somewhat dubiously, I would say -- that as many as 40,000 sex workers will be drawn to the country to capitalize on the event.

Combine all these factors and you could have one hell of a public health disaster. Improving access to condoms and accurate sexual health information is generally a critical aim in South Africa; the World Cup only magnifies the need. The country has gotten outside support on this end -- Britain has donated 42 million condoms specifically for the event -- which is all good and great, but it doesn't mean much if FIFA organizers prevent them from being distributed in the most efficient and productive way possible. But sex -- especially paid-for sex -- is rarely given such reasonable treatment.

Earlier this year, an independent study published in the journal Globalization and Health concluded that decriminalizing sex work -- even temporarily for the World Cup -- would be the best way to address concerns over the spread of sexual diseases during the games. (When prostitutes work in fear of arrest, they are much less likely to feel capable of negotiating for safe sex.) The report's authors were well aware that there was little chance of their advice actually being headed:

Decriminalising sex work is at odds with the sensibilities of many political and religious leaders and often raises their indignation and ire. Yet watching a population being decimated by HIV should evoke similar responses and elicit strong action based on evidence. ... A sensible South African response to sex work in the context of a global celebration of soccer could inspire long-term progressive changes to its legal framework and encourage the rest of southern Africa to follow suit.

Obviously, that ain't happening. Neither will South Africa legalize sex work in the interest of registering and testing prostitutes in time for the games, as some have suggested. It must be pointed out, though, that the approach of the South African government and FIFA organizers is hardly unique -- sexual health policies are rarely both entirely effective and socially acceptable.