Finally, all the highbrow thrills of the fine-art world in the absence of pretentious strangers holding wineglasses 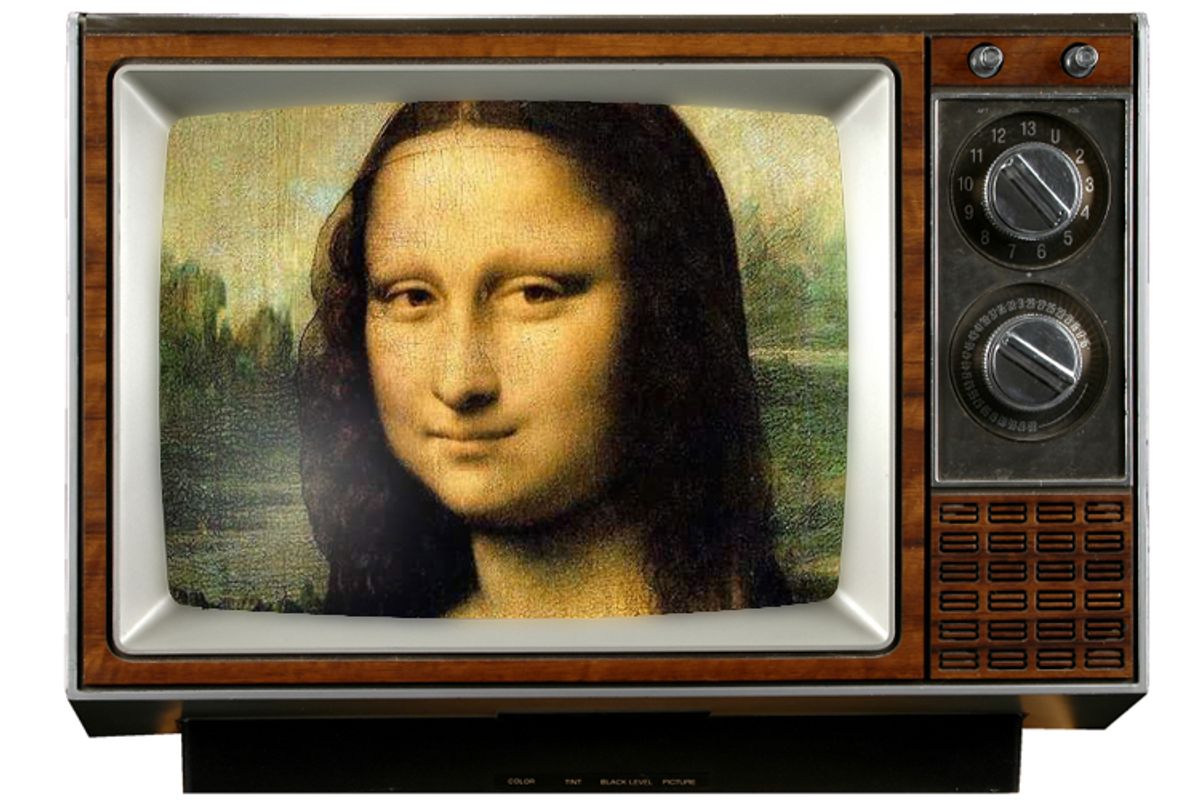 Oh, to be an artist! To splash paint onto canvases, or carve things out of wood, or smear chocolate pudding across your body, each act turgid with meaning, with messages! To remain brave and strong and confident in your art, even when everyone treats you like a recalcitrant child who refuses to give in to the demands of the mainstream world, who avoids gainful employment like it's contagious.

"This is art. I made it," the artist says, thereby justifying a fantastical existence, in which every extra hour of sleep, every wild experience, every heated conversation, is fuel for his or her creative fire. Imagine valuing every moment that much, believing that anything you do could add up to something weighty, regardless of whether or not anyone else can grasp its weight!

I envy artists. But I still have to wonder, should such idealistic little lambs be paraded into the crass slaughterhouse of reality TV, for the butchers to slice away at their bluster, to rip at their swagger, to tear apart their fragile egos?

Even if it slices and dices art into something consumable and therefore disposable, I love the audacity of Bravo's "Work of Art: The Search for the Next Great Artist" (premieres 11 p.m. June 9). This show takes all of the petulance and nastiness and passion of "Project Runway" or "Top Chef" and applies it to the rarefied realm of fine art. Even though there's something a little off-kilter about exposing the hothouse flowers of the art world to the inhospitable chill of mass media, even though executive producer Sarah Jessica Parker keeps clomping in on her tall shoes to remind us that she totally la-la-loves art and artists because she's just a big, fussy, important New York City connoisseur that way, even though I just know that some talentless hack will win the title of "Next Great Artist" but the title itself will prove to be a terrible curse and the winner will spend the balance of his or her days being assaulted by strangers on the street (the one experience that doesn't fuel even more great art), I still love this show, and I will watch it religiously. Fear me.

Because there is some little peek at glory here, among these odd people who can take a concept and translate it into an image or an object. There's patience and sensitivity and raw nerve, and it's good to see this kind of focus on the abstract, particularly when your life has become hopelessly concrete — and whose hasn't? How should experienced artist Judith Braun, 62, capture dolled-up hottie artist Jaclyn Santos, 25, in the premiere episode? Should she try to capture her femininity, or the audacity of her work? What kind of an image will reflect her essence? This is heady stuff — and stuff that's well worth watching on TV.

Why is it worth watching on TV, specifically? Because, while I might find the comments of the judges unfair or hopelessly pretentious or flatly irritating, while I might balk at the fact that China Chow's main claim to her role as the show's host is that she's an aristocrat who "was born into a family of collectors." (Hey, me too! My grandmother collected cottage cheese tubs and orange juice bottle tops!), I still love the fact that I'm not actually at an art gallery, teetering on bad shoes, drinking Sauvignon Blanc with a bunch of sniffling wieners with overpriced scarves tied jauntily around their smug throats. I love that I don't have to self-consciously lean in to view the little speckles of paint on the canvas, knowing that I appear to be just another one of these preening fools with appreciative or dismissive or critical looks plastered across their faces. I don't have to hear the murmurs of "Mmm, vibrant use of color!" or "This reminds me of Vermeer, a little — the darkness," or other Art History 101 vomitry.

What is it about art that makes us hate art lovers so very much? It's easy enough to love artists themselves, particularly artists who can convey emotion beautifully on the canvas but who struggle to express simple thoughts in conversation. I like that over-abstracting flavor of awkwardness in a person. What I don't like is the sorts of people who speak fluidly and easily and steadily at art openings, stuffing green grapes and Brie into their faces while deciding which painting will go best in their guest bathroom. Do I hate their big, dusty piles of cash that much? Or do I hate this urge to own something that came from such a pure place, to frame it and show it off and use it to service their own egos? But aren't we all ego-driven louts?

I am allergic to sophistication, is the bottom line. This must be why I get a strange tickling feeling in my throat when presented with "Work of Art's" Tim Gunn: Simon de Pury, "a leader in the international art world," who was the chief auctioneer at Sotheby's for many years. I love this description of him from his business's website: "He generates excitement in the saleroom, displays great charm and wit, and can conduct sales in four languages — English, French, German and Italian."

"My approach to art is purely phys-ee-cal," offers de Pury. "I normally know in the first split second if it's a great work or not." Oh sweet Jesus. Have you ever heard anything so deliciously pompous in your entire life? This guy is my new TV hero. But what is he doing on TV?

Some of the show's competitors seem to be wondering the same thing about themselves. "This is the first time my art's been out of the house, " says Erik Johnson, 30. "I just don't want to fall on my face."

Too late for that. Judith describes Erik's first piece as "high-school amateurish," and Mark Velasquez, 32, who has a day job as a fry cook, says, "That's what you make when you're a cool, angsty guy freshman year in college."

Yes, the artists on this show have clearly been chosen not just for their art, but for their propensity for criticizing each other. There's certainly no dearth of bluster among them — at least not yet. Nao Bustamante, 41, a well-known performance artist, says, "I feel like I've already won, and so I think that I can be really generous with my criticism." What a charitable soul!

After the first challenge, it's hard not to pick a few favorites. Abdi Farah, a 22-year-old artist from Dover, Penn., is my personal favorite, along with Miles Mendehall, 23, who says he has OCD and doesn't recognize Sarah Jessica Parker when she walks in the door, God bless him! Ryan Shultz, 26, sort of reminds me of the Liam Gallagher of the bunch (in a good way, if that's possible), proclaiming grandly, "Although I am broke most of the time, I live to create, and I create to live." Apparently he wakes up at noon and paints until 5 or 6 in the morning — which should prepare him well for the grueling weeks ahead.

Mostly, though, it's hard not to wonder how these very sensitive human beings will weather this surreal experience. And who will win the big prize, which includes a solo show at the Brooklyn Museum of Art? "It would be pretty hard to get excited about anything else for a long, long time," says Abdi of the prize. (Leave it to an artist to paint a huge victory in terms of the relative drabness of everything else.)

And still, there's something refreshing about these artists. To have so much conviction in your talent, to turn your back on conventional means of survival? There's something honorable about casting the typical career trajectory to the wind and just setting up a space to paint. Live to create, create to live.

And it'll be entertaining to see their bold and daring spirits crushed between the merciless snapping jaws of reality TV. I feel like I've already won!