A famous atheist reimagines the gospels 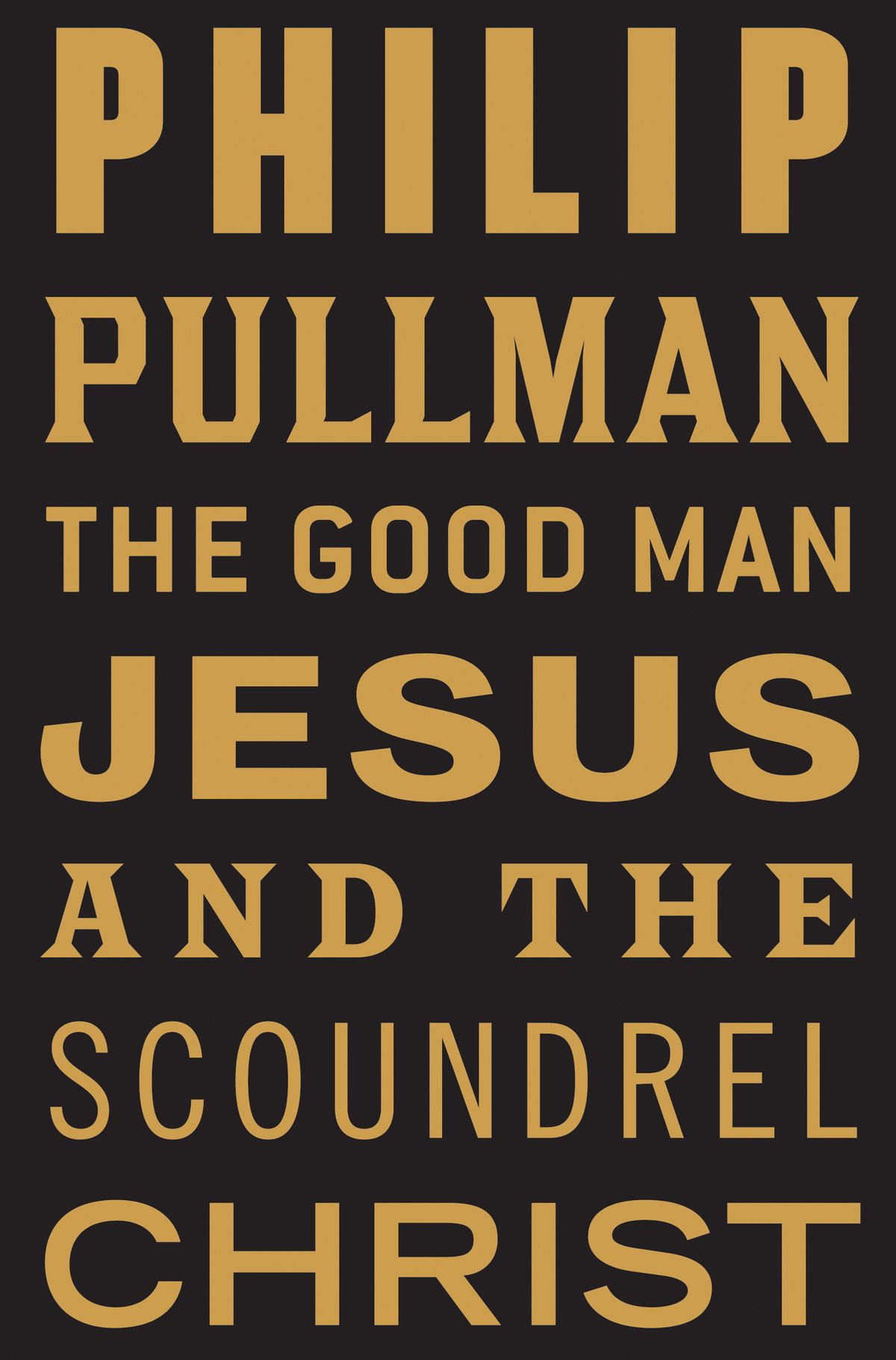 "The Good Man Jesus and the Scoundrel Christ," by Philip Pullman (Wendy)
--

"If I know your sect, I anticipate your argument," Emerson said, and those who know Philip Pullman's sect will readily anticipate the argument of his latest novel, "The Good Man Jesus and the Scoundrel Christ." No doubt the same applies to many readers of my sect, for whom Pullman's title will have roughly the same emotional resonance as "The Good Woman Janice and the Slut Your Mom."

But to leave it at that is to miss an important point, which is that Pullman actually has an argument. The commonly held notion that we are in the midst of a great public debate between atheists like Pullman and so-called believers like me is a fine construction for radio talk shows but a rather sloppy way of cutting the ideological cake. At least in the industrialized world, the more profound polarity is between those who care deeply about religious issues and those who couldn't give a damn about them one way or the other.

No less than Christopher Hitchens and Pope Benedict (though I have some doubts about Benedict), Pullman belongs to the first group. In other words, it is impossible for him to retell the story of the Christian gospels without bringing his own passion into it. Add to that passion his considerable gifts as a storyteller, and you have the ingredients for a powerful treatment of a familiar story.

The basic concept of the novel is a simple one. Pullman divides the figure that Christians revere as Jesus Christ into twin brothers. Christ, the weaker pup, "humbly" shadows his charismatic brother, attempting to further Jesus' mission even as he works counter to everything Jesus stands for. Pullman successively casts Christ in the role of Jesus' tempter in the wilderness, as the resentful elder brother in the parable of the prodigal son, as a stand-in for Judas Iscariot, and (with an echo of "The Passover Plot") as a Jesus impersonator at the Easter tomb. (With that much weight on the same leg, the book might have been called "He Is Heavy, He's My Brother.") At the urging of a mysterious stranger ominously known as the Stranger, Christ will attempt to preserve his brother's legacy in the dubious vessel of myth, from which he hopes it will be poured into the even more dubious vessel of organized religion.

As for Pullman's Jesus, he is more or less recognizable as "the Jesus of history," a figure beloved by ex-fundamentalists to about the same degree and for some of the same reasons that ex-substance abusers love the Internet: It scratches an old itch — for literalism in the first case, for numbness in the second. Still, I must admit that Pullman's Jesus moved me more than many of the carpenters to have walked out of the Jesus Seminar with a severe haircut. He is not a spirit person or a wisdom teacher or a kosher Kurt Cobain; he's an earthy Galilean Jew who loves God and the material world (he explicitly refutes Hellenic-cum-Gnostic "spirituality," which went a long way toward winning my heart) and hates hypocrisy worse than death. He has no messianic pretensions whatsoever, but if you had to have a messiah, you could do worse.

Readers expecting a nuanced working out of the book's title will get a little — Jesus is an uncompromising perfectionist with a chilling lack of fraternal feeling, while Christ is possessed of a lachrymose compassion — but ultimately the most ironic thing about the title may be its decidedly unfashionable lack of irony. It says what it means, much as Pullman's Jesus does.

As for inventiveness, there is no lack of that, but it is always framed by Pullman's keen awareness of the gospel narratives. He knows just how much of a revered story needs to remain intact in order to make its metamorphosis compelling. He gives us plausible and thought-provoking variations on the story of Mary and Martha, the parable of the wise and foolish virgins, and the character of Caiaphas, but in other instances he is content to refocus an incident simply by refreshing its language.

Of the two brothers, the "scoundrel" is by far the more interesting. I fear that some readers will be so caught up in Christ's various roles as "the heavy" that they will fail to take full account of his characterization. Reminiscent of the pathetic cross maker we meet in the opening chapters of Kazantzakis' "The Last Temptation of Christ," Pullman's creation calls to mind what Nietzsche said about the "sickness" of Christianity: that if you were healthy you didn't need to be told it was sick; you could smell it. Pullman seems to smell it too, possibly on himself, and I doubt there is an honest Christian alive who could read his tale without recognizing the mixed aromas of anxiety, guilt, cowardice and grandiosity that have all too often characterized things Christian.

In nothing is Pullman's Christ so pathetic as in his repeated and futile attempts to live up to the seemingly impossible demands of his brother's teachings. These episodes of failure are among the most poignant in the book. They are also among the most historically relevant: Pullman is telling multiple stories here, and one of them is about the centuries-old struggle between a radical, purist Christianity and the more inclusive and accommodating version that has usually prevailed in the established church.

What I found most compelling about Pullman's story, however, was what I failed to anticipate. To my surprise, the novel disturbed me least when the author's atheism became most explicit. It disappointed me most to the degree that the author's atheism was incomplete. Of course, I have some explaining to do.

In the Garden of Gethsemane (in a subversive riff on the "High Priestly Prayer" recorded in the 17th chapter of the Gospel of John), Pullman's Jesus confronts both the silence of God and the strong likelihood that any church resulting from his teachings will abuse its power. "Here we go," I thought. "We know the sect, and we are about to get the argument — in quite a few pages, apparently." And we do: In a passage more unabashedly "preachy" than anything else in the novel, Jesus as much as concludes that the God he has attempted to serve is either indifferent or altogether nil.

But that is not all we get. At the same time, Pullman gives us an affecting portrait of faith in extremis, of a man continuing to pray even as he doubts there is any auditor to his prayers — or, to put it another way, a fleshing out of the Eloi eloi lama sabachthani that the writers of the synoptic Gospels have Jesus quoting on the cross. It would be hard for an atheist or a theist to stick the banner of his or her sect in Pullman's monologue. Harder still not to recognize in Jesus' prayer the searing passion of Pullman's own religion-stuck heart.

The most troubling part of the novel for me was not the silence of the divine, much less Jesus' indictment of it, but the residue of an almost sinister supernaturalism. The Virgin Mary is impregnated by a sly young man who claims to be an angel buts acts like Elmer Gantry, his otherworldly prescience notwithstanding. God doesn't talk, but the Stranger who reappears with uncanny timing throughout the novel talks at great length — of things past and things to come, of things within the very heart of Christ. The least magical thing he could be is a clairvoyant. In a book purportedly intended to challenge one's religious faith, Pullman manages only to confirm a religious prejudice: namely, that an obsession with removing the Lion from "The Lion, the Witch and the Wardrobe" too often leaves us with a witch and — true to the bourgeois preoccupations of our God debate — a wardrobe. This is not the universe of Bertrand Russell; it's the universe of Stephen King. Pullman's weird passengers, more than the absence of any divine driver, are what made me want to jump off the bus.

But not away from the author. This is the first book of Pullman's I have read. It will not be the last. (A pair of my brightest younger friends recently gave me the "His Dark Materials" trilogy for Christmas.) I suspect he will get under my skin from time to time, and I will stick with him as long as he does that and as long as that's not the only thing he does. Orwell said that all art is propaganda, a good thing to keep in mind so long as we remember that all propaganda is not art and that nobody's last word on art is George Orwell. But if having the good artist Philip means I must also have the propagandist Pullman, then so be it, or as they say in my sect, Amen.

Garret Keizer is a freelance writer and a contributing editor of Harper's magazine. His new book, "The Unwanted Sound of Everything We Want," has just been published by PublicAffairs.