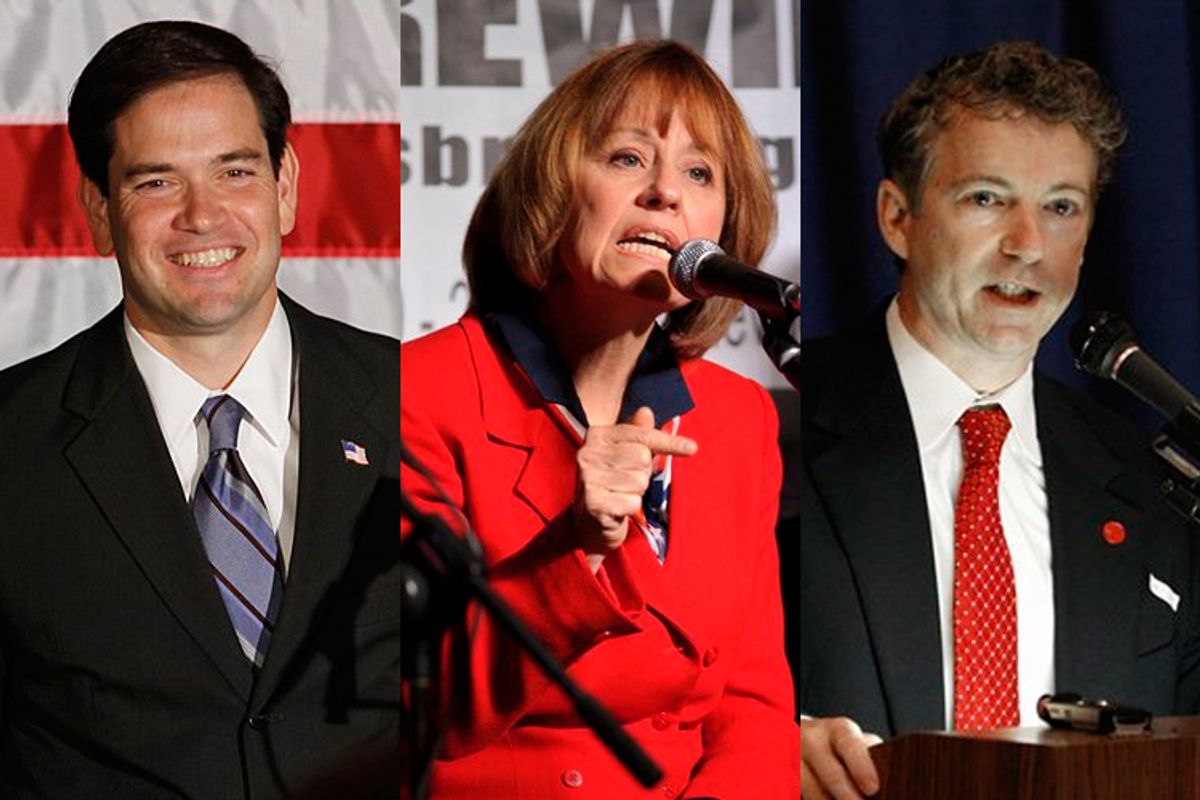 The Republican Party's lurch to the right in the past few years is undeniable. The 2006 and 2008 elections cost the GOP's few remaining moderate House members their seats, and now the party is set to field scores of brash conservative candidates in this fall's midterms.

Three of this year's Senate contests are poised to test the durability of this rightward movement, with the fates of Marco Rubio in Florida, Rand Paul in Kentucky and (assuming she wins Tuesday's GOP primary) Sharron Angle in Nevada set to provide a clear indicator of whether going hard right is a viable electoral strategy.

This trio has two things in common. First, they're all Tea Party favorites who have toppled (or are poised to topple, in Angle's case) GOP establishment favorites. And second, because of their arch-conservatism, they are — at least on paper — less electable than the more mainline Republicans they vanquished.

Given the climate of 2010, Republicans were staring at near-certain victories in Florida, Kentucky and Nevada. But with Rubio, Paul and Angle, these states will essentially be toss-ups.

Nominating them amounts to a high-risk electoral strategy.

Of the three, Florida may be the most important to the Republicans in the long term. Starting from more than 30 points behind Charlie Crist in GOP primary polling, Rubio was able to ride a wave of dissatisfaction among Florida Republicans, who viewed Crist as too moderate. Rubio’s stunning rise led to Crist’s excommunication from the party and his decision to run for the seat as an independent. Unlike Paul or Angle, Rubio is a highly disciplined candidate with a telegenic presence. Should he prevail, he might be an attractive option for the GOP at the national level in 2012 or 2016 — especially if the party needs help reconnecting with disaffected Latino voters.

But first he must beat Crist in November. Rubio remains favored, but is not the general election shoo-in that Crist would have been under the Republican banner. Crist and the Democratic nominee, Kendrick Meek, are currently splitting the Democratic vote, thus boosting Rubio. But if Meek were to drop out in the fall, Democrats would presumably rally behind Crist, putting Rubio in severe danger.

Republican prospects are also uncertain in Kentucky. Since his overwhelming victory in his May 18 primary, Paul has been at the center of a media firestorm after he seemed to indicate — at least initially — objections to the Civil Rights Act of 1964 and the Americans with Disabilities Act. While this could be considered the kind of political burp you’d expect from an unseasoned nominee, Paul’s quirky libertarian ideology and lack of restraint suggest greater problems down the road for Republicans in a red state they should have no trouble winning this year. The most recent polling has Paul slightly ahead of his Democratic foe, state Attorney General Jack Conway.

If Paul represents the Republicans’ most interesting nominee this cycle, then Angle may be the GOP’s riskiest (potential) selection. Like Paul, Angle is far right, but her views are more established, since she's been in the political arena longer. She served for six years in the Nevada state Assembly and has waged losing bids for the state Senate and Congress. She supports the privatization of Social Security, believes the Department of Education should be shuttered, and has called for the end of the federal income tax.

If Angle wins on Tuesday (and the latest polling has her pulling away), it will be problematic for Republicans, who have made ousting Majority Leader Harry Reid one of their top priorities this year. Reid, a four-term Democrat, has been a heavy underdog for months against other GOP candidates, but versus Angle the race would suddenly be a toss-up. Given Nevada’s centrist nature, Reid’s deep war chest, and Angle’s polarizing conservatism and past electoral mediocrity, the GOP may fritter away a crucial seat with her as their candidate.

Taken together, Republicans are today staring at tough fights in three states they should have wrapped up early on. The GOP remains slightly favored to win these contests, but they could all be quite tight come November.

Consequently, the three states' races will collectively test the strength of the GOP’s rightward lurch. If Tea Party-endorsed candidates like Rubio, Paul and Angle cannot win in non-blue states in an unquestionably Republican year, it will starkly demonstrate the limitations of the Republican Party's post-2006 metamorphosis. If all three go down to defeat, the Republican Party will be due for some serious self-appraisal.