"The Passage": An apocalyptic epic with heart

Justin Cronin's tale of vampires vs. humans is a mesmerizing combination of literature and pop 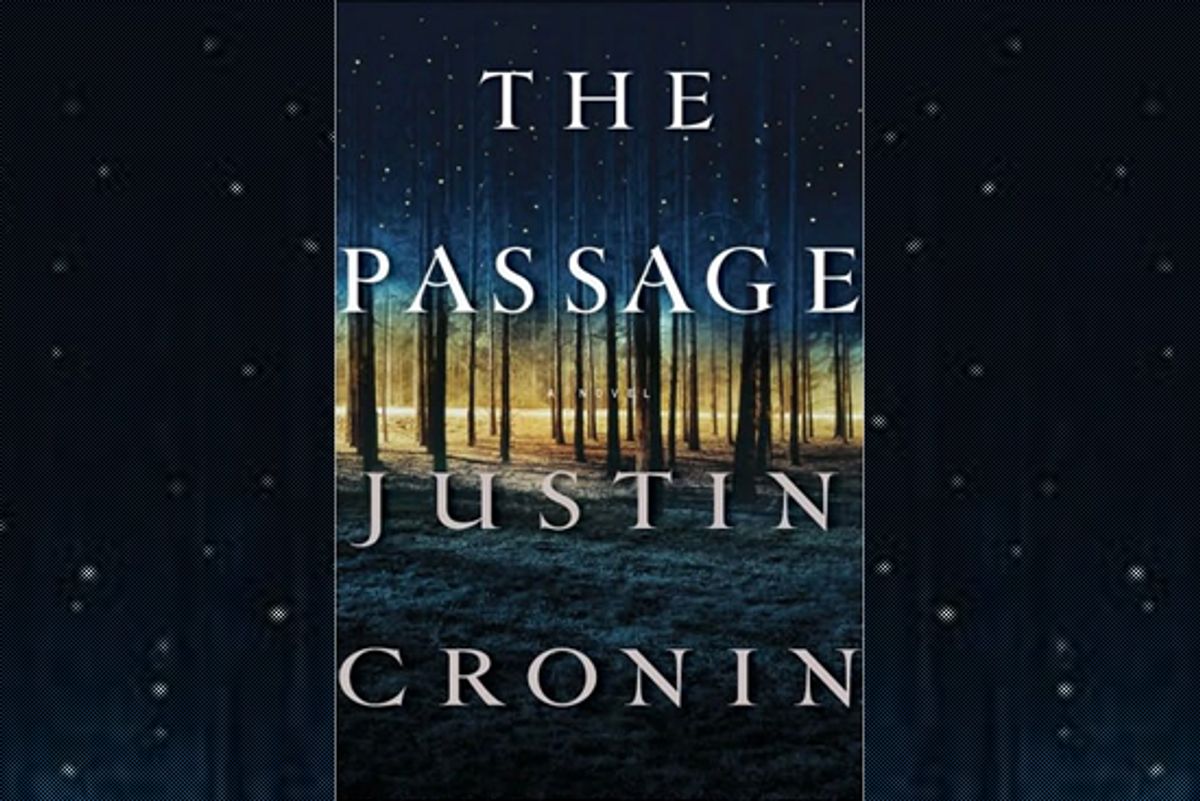 Enthusiasm for "The Passage," Justin Cronin's 770-page post-apocalyptic vampire epic, has been swelling in the publishing world for nearly six months now, and chances are that some kind of backlash will kick in even before the book is officially published on June 8. I can well imagine the complaints likely to be lodged against the novel by kneejerk naysayers, but, readers, I am here to assure you: "The Passage" is indeed all that.

Cronin has previously published two conventional literary novels and won a PEN/Hemingway award for one of them. This means that he writes quietly refined sentences and can incise all the finer details of character that make a fictional person seem like someone you'd actually know instead of merely a representative Cop or Scientist or Lawyer. "The Passage" begins a little like a Raymond Carver story, describing how the novel's enigmatic central figure, Amy Harper Bellafonte, came to be. She's the product of a brief liaison between a traveling salesman and a waitress in an Iowa diner known to locals as "the Box, because it looked like one: like a big chrome shoe box sitting off the county road, backed by fields of corn and beans, nothing else around for miles except a self-serve car wash, the kind where you had to put coins into the machine and do all the work yourself."

The story of Amy's first few years is a piercingly naturalistic tale of downward mobility amid truck stops and cheap motels. Like much of the book, it's suffused with the doomed yearning of adults who want to protect children from the brutality of the world. Then, suddenly, you're reading documents about an ill-fated scientific expedition to "the jungles of Bolivia," and the weird virus brought back by the handful of survivors. From there, it's off to secret government projects involving experiments on death-row inmates and finally on Amy herself — the typical furniture of paranoid science fiction sagas like "The X-Files" — but always conveyed with those extra grace notes of personality and place too rarely found in genre fiction.

This is the double bind confronting the contemporary reader: a choice between those grace notes and accomplished storytelling — because storytelling is where genre fiction, as a rule, excels. There are those who think the two qualities are mutually exclusive, and they have a point. Clichés and stereotypical characters are familiar and instantly legible; they make for what people like to call a "fast read." Contrary to what some writers and critics seem to believe, literary prose doesn't have to meander through vast steppes of adjective-strewn description, but if it aspires to a distinctive voice, to freshness of imagery and psychological depth, then readers aren't going to be able to rocket through it as if it were a Dan Brown potboiler.

Still, it's possible to write a novel that revels in narrative momentum and pop mythos while still honoring the textures of real people, places and things. In fact, the novelist who can successfully fuse these two seemingly opposed strains of contemporary fiction can often win a large, devout audience, as Michael Chabon has proven. Lev Grossman and Michael Gruber have been injecting literary elements and ideas into the fantasy novel and the thriller, respectively, as well, but Cronin has set his sights on that peculiarly American genre best epitomized by Stephen King's "The Stand."

"The Passage" will remind many readers of "The Stand" as well as another bestseller or two that I won't name for fear of spoilage. The novel consists of three major movements. The first takes place in the present and recounts how Amy falls into the hands of the operation called Project Noah. The second takes place much later, in a world suffering from the aftereffects of this experimental program. Finally, the third describes the journey of a small desperate group trying to fend off further catastrophe.

Some of Cronin's motifs and techniques will be vaguely familiar from earlier apocalyptic fiction and films, but that doesn't wind up mattering as much as you might think. "The Stand" itself harks back to biblical and classical myth — Moses, Aeneas, Odysseus — as does "The Passage"; these stories are fundamental to Western civilization and can be repeated and reworked countless times without becoming worn out, as long as they're handled with imagination and skill. It's all in the execution. Cronin gets it just right; the combination of attentive realism and doomsday stakes makes for a mesmerizing experience.

"The Passage" does differ in several important and interesting ways from "The Stand." Supernatural forces play a subsidiary, even minimal, role in Cronin's novel, and where King's instinct is to reach for bold, stark, operatic effects, Cronin is more understated and often more thoughtful. King's characters tend to be driven by one or two major desires, fears or traits, while Cronin's people are full of contradictions and surprises. And perhaps most important, the underlying framework of "The Passage" is ultimately less metaphysical than that of "The Stand." Cronin's novel isn't about the clash between good and evil, but about humanity's struggle to forge a better world in spite of our own worst mistakes.

And, yes, there are vampires, although they're semiconscious beasts, a far cry from the suave, politicking predators of "True Blood" or the immortal dreamboats of "Twilight." When you get right down to it, there are two kinds of vampire stories: the kind that's really about the vampires, and the kind that's about the human beings fighting them off. "The Passage" belongs to the latter group. Its vampires could just have easily been zombies; they stand for the ravening external forces — time, violence, madness, death — that are forever battering against the walls of every hopeful community.

There's much more to say about "The Passage," and I'm hoping you'll join us for Salon's new Reading Club to discuss it with us. For more details on the club, visit this page.