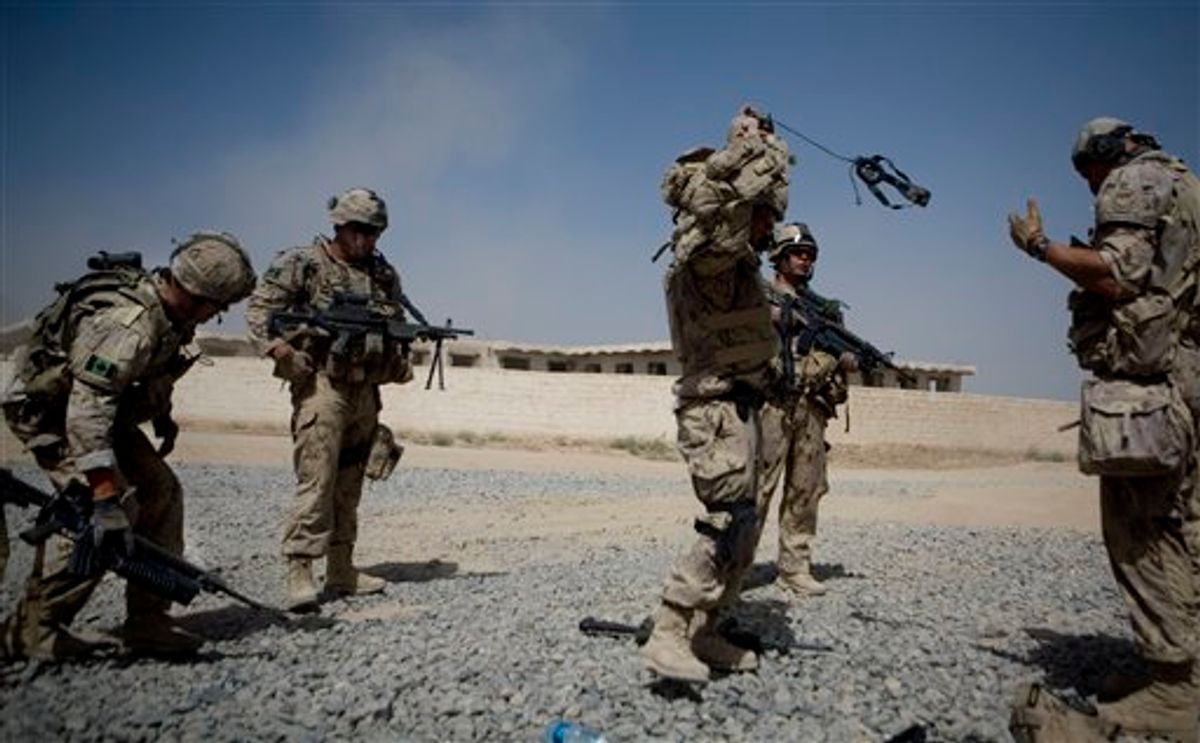 Canadian soldiers with 1st RCR Battle Group, The Royal Canadian Regiment, get ready to reinforce troops after one of their comrades got injured by an IED blast during a patrol outside Salavat, in the Panjwayi district, southwest of Kandahar, Afghanistan, Monday, June 7, 2010. IEDs have been the single biggest cause of death among Canadian troops in Afghanistan. Seven out of nine Canadian deaths this year were the result of IED blasts. (AP Photo/Anja Niedringhaus) (AP)
--

Bombs and bullets killed 10 NATO soldiers, including seven Americans, in a wave of violence in Afghanistan on Monday -- the deadliest day this year for the international forces.

The bloodshed came as Taliban insurgents ramp up bombings and attacks on NATO forces ahead of a major operation in the southern Taliban stronghold of Kandahar that Washington hopes will turn the tide of the war.

Two more U.S. soldiers were killed in separate attacks Monday -- one a bombing in the south and the other by small arms fire in the south.

Three other NATO service members from other countries were also killed in attacks Monday.

In addition, an American contractor died in a suicide attack against the police training center in Kandahar city, the U.S. Embassy in Kabul said.

No details were immediately available for the operations in which the NATO troops died.

The American contractor, who was not identified, and another person were killed when a team of three suicide bombers attacked the gates of the police training center.

Afghan officials said one bomber blew a hole in the outer wall, enabling the other two to rush inside. But they were killed in the gunbattle that followed.

The violence came as President Hamid Karzai's spokesman defended his decision to remove two of the country's top security officials.

The Sunday dismissals drew fire from some political figures linked to the alliance that helped the U.S. oust the Taliban in 2001 and who fear the shake-up will play into the hands of the insurgents at a critical point in the war.

Karzai last week won endorsement from a national peace conference, or jirga, for his plans to offer incentives to lower-rung militants to lay down their arms, and to formulate an approach to Taliban leaders. Washington is skeptical talks should be opened with the Taliban until they have been weakened on the battlefield.

For their part, the Taliban call Karzai a U.S. puppet and say there will be no talks while foreign troops are in Afghanistan.

The two officials who resigned each had deep backgrounds as strong opponents of the Taliban.

Intelligence chief Amrullah Saleh was a senior figure in the Northern Alliance that helped the U.S. oust the Taliban regime in 2001. Interior Minister Hanif Atmar served in Afghanistan's Communist-era intelligence agency and fought mujahedeen opposed to the Soviet occupation.