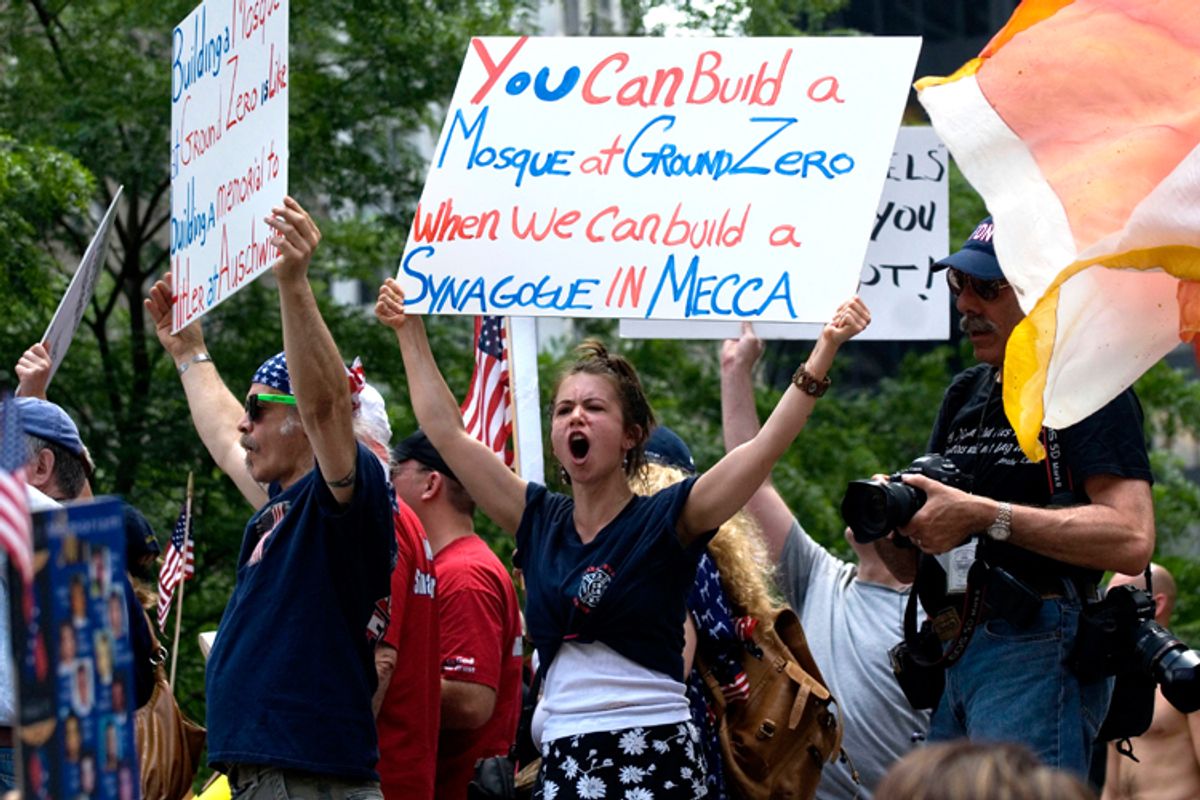 People in New York protest the proposed construction of a mosque near the World Trade Center site on Sunday, June 6.
--

There was a protest yesterday, attended by various wingnuts, racists, riled-up nativists, and terrified fools, of the supposed "Ground Zero mosque." (It will not be at Ground Zero, and it will actually be a community center that will include a mosque. But still.)

While national conservatives have picked up the ball, what local opposition there is to the proposed community center has been ginned up by Rupert Murdoch's New York Post -- mainly via perpetually outraged columnist Andrea Peyser, whose anti-mosque columns are regularly teased on the front page.

The entire anti-mosque campaign isn't about anything other than pure, paranoid Islamophobia. A Peyser column a few weeks ago was entirely about people in Sheepshead Bay -- some miles from Ground Zero -- protesting a proposed mosque solely because they're scared of Muslims.

Anyway, they had their protest yesterday. Mike Kelly of the Bergen (New Jersey) Record reported this heartwarming incident:

At one point, a portion of the crowd menacingly surrounded two Egyptian men who were speaking Arabic and were thought to be Muslims.

"Get out," others shouted.

In fact, the two men – Joseph Nassralla and Karam El Masry — were not Muslims at all. They turned out to be Egyptian Coptic Christians who work for a California-based Christian satellite TV station called "The Way." Both said they had come to protest the mosque.

"I'm a Christian," Nassralla shouted to the crowd, his eyes bulging and beads of sweat rolling down his face.

But it was no use. The protesters had become so angry at what they thought were Muslims that New York City police officers had to rush in and pull Nassralla and El Masry to safety.

"I flew nine hours in an airplane to come here," a frustrated Nassralla said afterward.

But don't you dare call these people bigots!