Nailing infertility with an ad

Finally, couples trying to conceive find understanding and comfort ... in a campaign by big pharma? 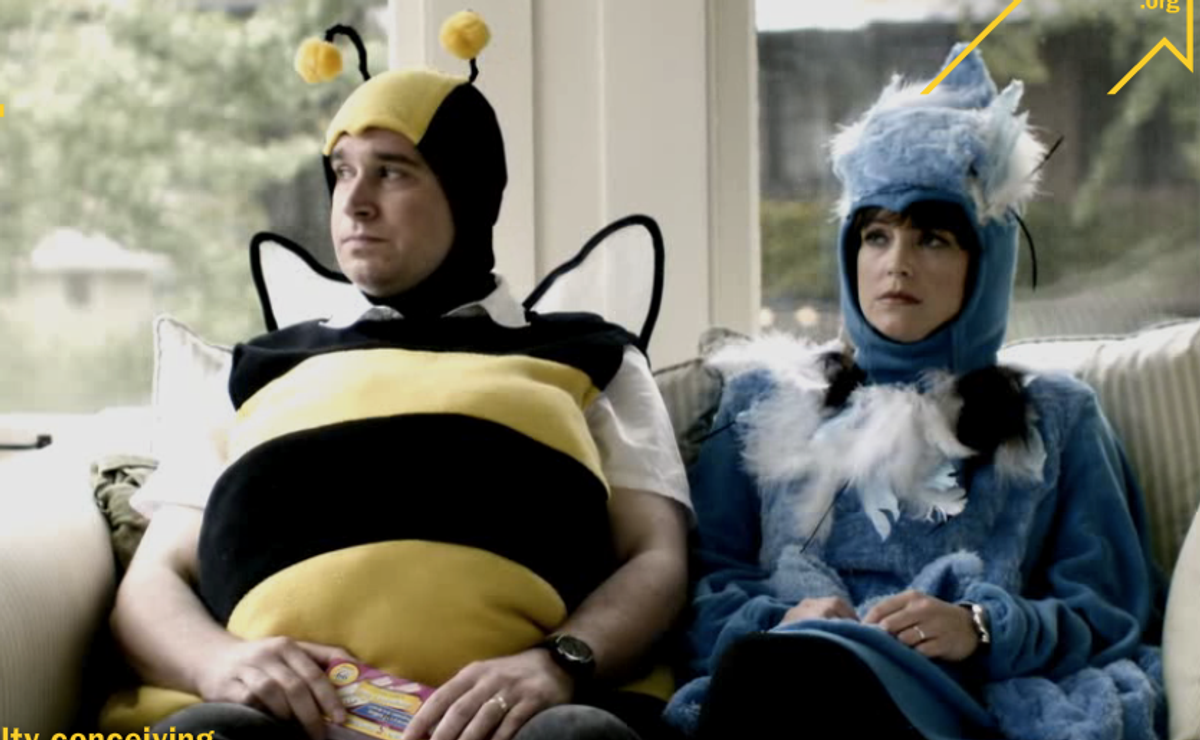 "Increase Your Chances" ad for infertility
--

She's a bird. He's a bee. In other words, they do it. And yet, we soon find out, what "should" be the most "natural" thing in the world isn't happening: After a year and a half of doing it, there's still no, um, bird-bee baby on the way. She wings another negative test across the bathroom; he sneaks a peek at his package -- his bee package -- in the mirror, wondering if it's all his fault. She gamely acts as baby shower gift-note secretary, wondering, "Who has a baby shower on her fourth child, anyway?" They, in a failed attempt to "relax," play a joyless game of bird-bee Jenga.

Mr. and Mrs. Bird-Bee are actually "Neil and Karen," who are actually two very funny deadpan actors in giant goofy costumes. They're the stars of a series of five webisodes at the centerpiece of a new campaign designed to raise awareness about infertility, one that nails the experience so knowingly and wittily that it's getting big love from the infertility community -- which is especially notable considering that, in fact, it's coming from big pharma. Sponsored, subtly (no, really), by EMD Serono -- Massachusetts-based maker of fertility drugs used to stimulate ovulation -- the "Increase Your Chances" campaign encourages couples to visit a specialist if they hit that fertility wall, and, more broadly, aims to change the way infertility is talked, or, more to the point, whispered about, in our culture. (Part of the campaign involves sending bird- and bee-clad actors onto the streets of small cities -- two weeks ago, it was Austin -- to "get couples talking about fertility issues.") The Web spots also close with key facts about infertility: One in eight couples struggles with it; it's about equally likely that fertility issues will stem from the male as the female partner; 85 to 90 percent of fertility issues are treatable; infertility -- "just relax," my ass -- has no correlation with stress. While scattered dissenters find the humor trivializing, most bloggers and commenters became big fans on sight, sending the videos to each other and also (as one poster wrote) to "close (and fertile) friends who are trying to be supportive of me but who just don't quite understand what living with infertility is like."

"This ad campaign takes infertility out of the darkness," says Barbara Collura, executive director of RESOLVE: the National Infertility Association, who has partnered with Serono as a resource for patients.

What's it doing there in the first place? Thankfully, infertility is not like it was for my childless great-aunt Bess (for whom my daughter is named), born in 1898, who went through it even before it had a name (or books, or blogs, or support groups, or treatments). But for all the resources and help available, there somehow persists the old-fashioned, possibly sexist notion that women get pregnant because that's what they do, that conceiving is the natural, default outcome -- after all, we spent so many years trying not to, goddammit -- such that failing to seems to mean there's something wrong with you. Not your plumbing, you. Result: stigma, secrecy, shame. (For the, mercifully, relatively short time I subscribed to Conceive magazine, I felt like I had to slip it inside something respectable, like Us Weekly, when I read it on the subway.) The assumption persists that every (married) woman will have a child, even those who aren't interested. So you can imagine how that might feel for those who are. But, then, articles about infertility online, for one, often elicit ungenerous commentary that basically boils down to "boo-fucking-hoo." Our nation's collective pop-culture "bump watch" being on permanent orange alert (what Rebecca Traister called "pregnancy porn") doesn't help, either.

Speaking of culture, it's not overflowing with positive, nuanced or compassionate images of women struggling to conceive or seeking fertility treatment. (One word: "octo-mom.") Also, if you totally forgot that there was a dramedy about a fertility clinic on NBC called "Inconceivable," good. In "Increase Your Chances," Neil and Karen do drift a bit toward the tired doofy-husband/testy wife (hey, it works in "Modern Family"), but they're still pretty winning; they still ring real, right down to the rank wheat-grass snake oil and military-timed robosex (post-coital murmur: "Don't forget the dry cleaning"). They're tense, they're tender: You root for them. "They're note-perfect, an assessment that my commenters share," says Julie Robichaux of ALittlePregnant.com. "They're kind of Everyinfertile, in fact, stunningly typical. For people trying to conceive, that makes it easy to relate to the couple. For those not in that situation, it advances the notion that people who do seek fertility treatments aren't quite as egomaniacal/selfish/not-like-us as they may previously have thought -- a win for the infertile community. By humanizing the couple so unerringly, the ads make us receptive to the message."

How did Serono (and mono, the agency they worked with) get it so right? Not rocket science: They talked to people. "What you see comes directly from conversations with patients," confirms David Stern, executive vice president of endocrinology for EMD Serono. "We wanted to come up with an awareness campaign to help create less stigma around infertility. We looked at everything being done online by IVF clinics, patient advocacy groups, and competitors, and we saw very similar themes: flowers and soft colors and other warm, fuzzy things and babies. Lots of babies. It's all done very softly. We said, 'OK, a lot of people are doing this and there's still this stigma. We want to do something different that will get a conversation started, in a way that's humorous without making fun." He adds: "We also want to get people to physicians who know how to treat them. If they use fertility drugs, that's great, but we really want to motivate people to go in to see specialists because that's the best route for them to become parents."

That's a welcome message, too, says Robichaux. "It undoubtedly serves the drug company, but it also serves anyone who's been trying for a while with no success. Nothing frustrates me more than to hear a friend tell me, 'Well my gynecologist said a year's not that long, that we should just keep trying on our own.' Lady. You're 41. Your doctor has done you no favors."

The ads, she notes, also don't pander or patronize by promising success. "That's huge," she says. "Not only is it a truthful acknowledgment of the limitations of medicine -- imagine that -- it's also a very respectful position to take with regard to the intended audience. Infertile people know that there's no magic bullet, or silver needle, or pregnant rainbow Pegasus crop-dusting the world with glittery baby dust." And now they also know that there are a few more people who understand.