"I Know I Am, But What Are You?": Samantha Bee explains the world 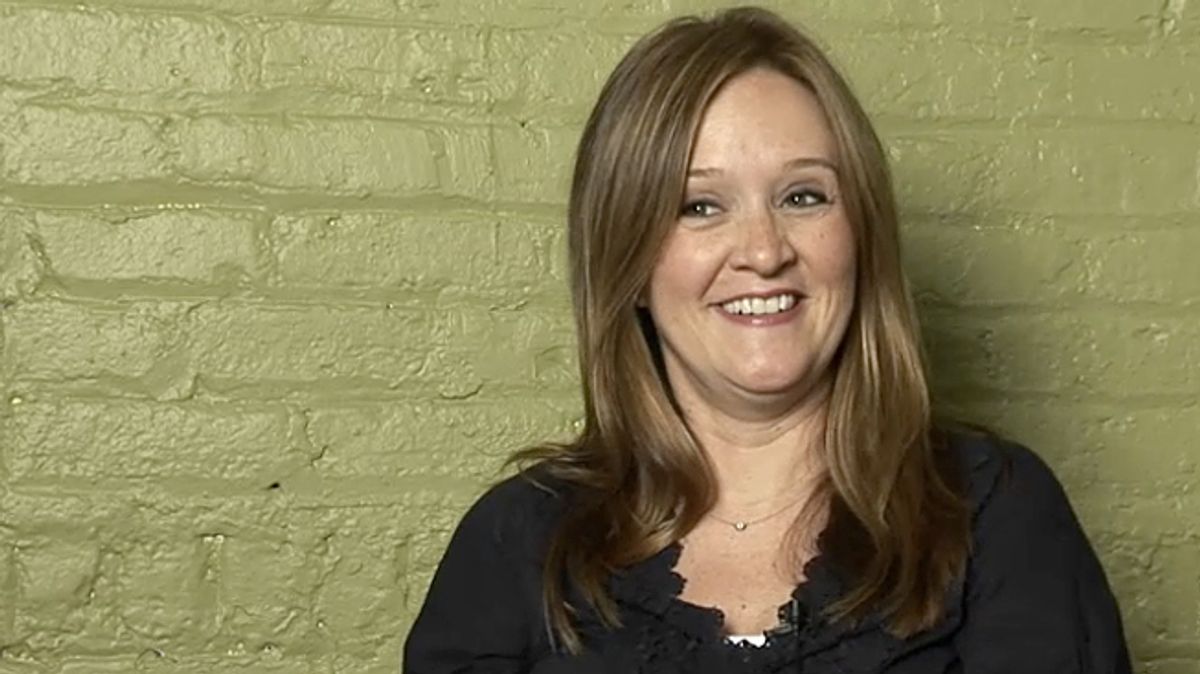 Samantha Bee, "Daily Show" correspondent and author of "I Know I Am, But What Are You?"
--

You probably know Samantha Bee as the wisecracking correspondent from "The Daily Show," where she's been spoofing senators and interviewing outspoken academics and unsuspecting frat dudes for the past seven years. You probably don't know that she had a brief stint as an actress in a live-action stage production of the megapopular anime "Sailor Moon," where she met her husband and "Daily Show" co-correspondent Jason Jones, or that, in her teenage years, she helped hotwire cars with her boyfriends. "I Know I Am, But What Are You?" is Bee's first book, a series of vignettes about her younger years in Canada, including what she learned from living with her grandmother ("Showers are like having water attack you. Civilized people take baths") to her crush on Jesus ("He wore a freshly pressed robe all the time, but you knew He had a great ass and could have pulled off a pair of jeans and worn-out cowboy boots, even if you weren't sure why you would want that.") Salon spoke to Bee over the phone about women on "The Daily Show," going into labor at work, and why people say ridiculous things on camera.

You also talk about being really shy when you were younger, which seems like a tough thing for someone interested in comedy. How did you cope with that onstage?

I continue to be very shy. I think a lot of actors and performers are really weird, shy people working it out onstage. I don't know why that is. There's some sort of crazy pathology there. But I never feel shy onstage. I feel very natural. It feels like my lungs are full of air and I can feel my space. I don't get tense, I don't get uptight, onstage. And when I started doing comedy, I was performing with really good friends, and that made it easier. I'm shy, but I'm not clinically shy. I don't have social anxiety disorder or anything like that. I more have a gentle shyness. Like, I have a little trouble mingling at parties.

Isn't it pretty rare to find a person who went straight from high school to college and launched right away into a best career? I really hate those people. They come around occasionally, but I really do resent them. Everybody should have to wait tables for at least a small stint in their life. It makes you a better person. Or an erectile dysfunction clinic, take your pick. I'm going to say that my time working at a framing store in the mall was probably the worst, because I don't think I learned anything there. It was really dreary, and all I had to breathe was the mall air. At least at the erectile dysfunction clinic, you could crack a window and it was never the same phone call twice. [Laughs] I learned a lot there — and you can put that in all caps. A LOT.

You met your husband, Jason Jones, working at a stage production of "Sailor Moon," and he's been your co-worker off and on for years. What's the most challenging part of working with your husband?

Honestly, there's not one. There is no downside to it for us. I don't know how we would live if we didn't work together. I'm not even talking about creative energy, just logistically. We totally understand each other's schedules. We share an office, which lets us have normal adult conversation away from our children. It makes for a really supportive work environment. I don't know that he would agree. [Laughs] While we're at work, our desks are parallel and he just puts on his noise-canceling headphones and doesn't listen to me at all. I have to throw a pen at him to get him to look up.

When do you think your children will be old enough to read your book?

I am not going to recommend that they read it. When they're ready, I think they'll just pull it off the shelf. Hopefully it will not be in the next four years. Piper doesn't even know how to read yet. I would not like that to be the first book that she reads. We're still working on "The Tale of Squirrel Nutkin." I'd like to keep it that way for at least a little while longer.

Your book stops just short of your foray into comedy. Why didn't you include it?

It just didn't seem like humorous territory to me. The book was a really nonlinear process. There were a lot of threads I was working on all at once. And at the time, it didn't really occur to me, even though I'm sure it would have been very interesting to people. I wouldn't say I don't have any funny stories about it, but I was doing what I loved and that's not as funny as doing something that you don't love.

You’re now eight months into your third pregnancy, and a lot of it has been on-air. What's it like to be pregnant on camera?

There's nothing much to deal with, really. I've been able to work with confidence throughout them. In fact, I was in labor with my second child at work. I was already in labor when I got to work, and then I just said "Eh, I'll see what happens." I don't think I got much done. I kept having to stop and breathe through contractions. But I've never found that it limits what I can do. It limits what people think you can do. No one wants to push you when you're pregnant, which I respect. But I will push myself as far as I feel capable of going. The other day, for one of our pieces, I got on a jet ski on the back of a trailer in the Bronx. And everyone was yelling "Don't get on the jet ski!" And I was like, I know I'm pregnant, but I will let you know if I can't get on the jet ski. I still have limbs! My heart still pumps blood. I just weigh about 30 pounds more than I did eight months ago.

For a few years you were "The Daily Show's" sole female correspondent. What was that like?

My perception of the job at "The Daily Show" was not different for me or more difficult for me because I'm female. I don't feel like I was ever silenced for my woman-ness or anything. They have certainly embraced me as a mother, and that has been rich comedic territory for them. I never felt like I was overcoming something there. Jon [Stewart] really took me from a place of total obscurity and gave me a platform from which to speak. I have a very dirty mind, to be honest with you. I think it sometimes may be dirtier than any man in the building. So it hasn't been a hindrance at all. I'm not saying that a dirty mind is required if you want to work with men, but it helps.

Why do you think late-night shows remain so male-dominated?

I'm not sure, but I do know that women come up to me all the time and they ask me what the process is for submitting to the show, and I give them the information, and then they don't seem to want to do it. There's something that's intimidating to women about the process. I just know so many female writers who never submit, and I'm not sure why. I know that "The Daily Show" is excited to receive material from women. But they have a certain framework to work with them. They just want people to make them laugh — male or female, they really don't care. If you're a woman writer and you want to submit a package, you absolutely should.

On "The Daily Show," you seem to have a knack for getting people to say ridiculous things on camera. How do you do that?

We seem to select people for our stories who take a strong position on something. It's not that hard to get people to say what they think. If they happen to feel strongly about something that works for us comedically, that is preferred.

When you're going into an interview, do you ever have mixed feelings about making fun of people? Do you have to push yourself to be tougher, or hold back?

I think I have a pretty good sense of what people can handle and what is going too far for them. I do try to make it pleasurable for people, or at least not the worst day of their lives. Usually people enjoy the experience. I can't say that I really have regrets. People say the things that they say, and they do the things that they do, and we train a camera on them. They are participants in it. It's not a takedown, not usually. And people know where we're coming from. If they don't know coming into it, by about halfway through the process they have a much better impression of what we're up to. Usually we spend at least an hour with people. The reaction we get back from people after they see the piece is usually positive. I'm going to go so far as to say that people are usually thrilled. Maybe it's just that people who are upset don't contact us.

"The Daily Show" is known for its political comedy, but it also gets criticized as simply contributing to the news echo chamber and preaching to a choir of like-minded audience members. How do you respond to that?

Our audience is who it is. Of course we play to them; that's what shows do. That's what [Sean] Hannity does. That's what they all do. I don't think we're constantly working to please our audience masters; it's about pleasing ourselves. Sometimes we don't please them, and that's OK too.