Is Sarah Palin's clout in Alaska on the wane?

She's a superstar on the national GOP stage, but back home, voters -- and her party -- may be tuning her out 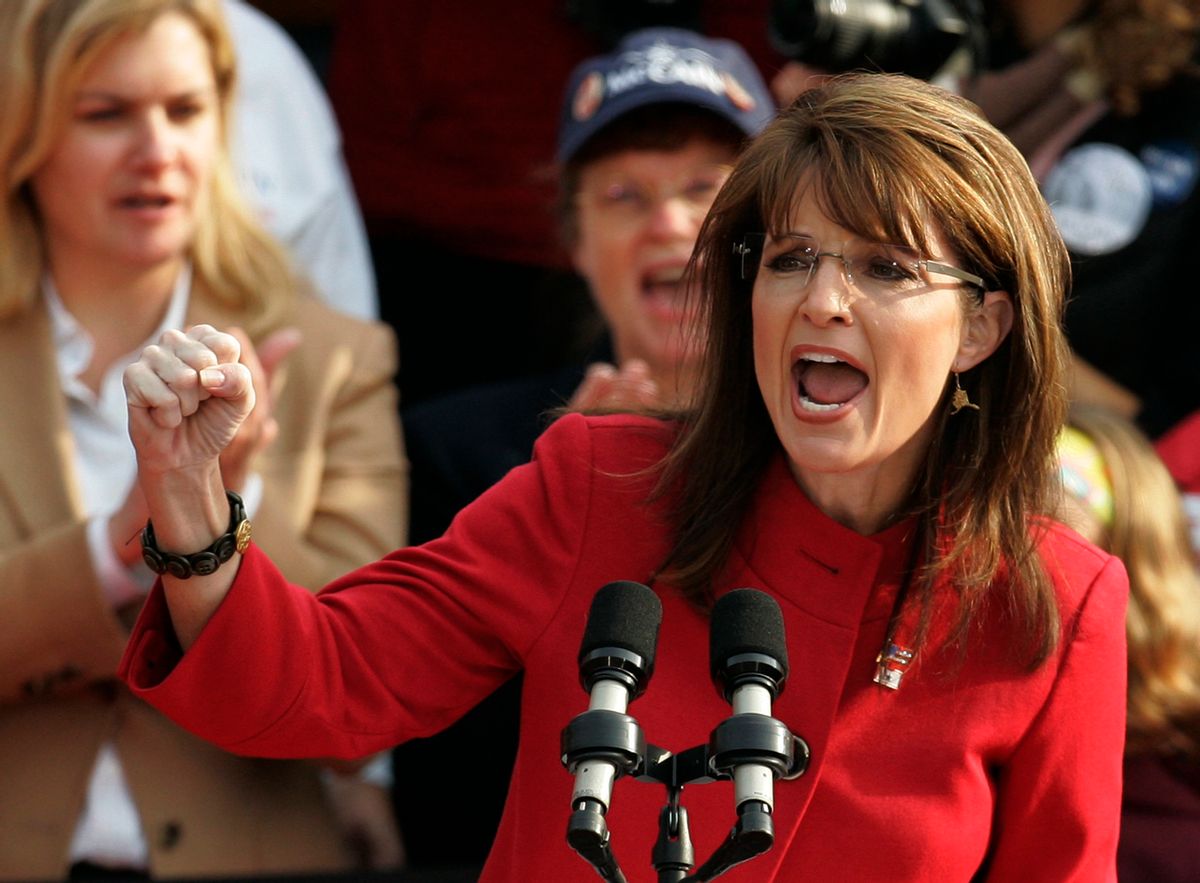 Sarah Palin’s endorsement of Joe Miller over Lisa Murkowski in the Alaska Republican Senate primary is proof that not all female Republican candidates are “mama grizzlies,” the pet term Palin is fond of bestowing on women she endorses.

The former Alaska governor announced her backing of Miller, a Fairbanks lawyer, in a Facebook post last week.

“Lisa Murkowski and much of the political establishment have recently evolved into being a bigger part of the big government problem in Washington, and they've strayed from the principles upon which they had espoused,” the post read.

Palin insisted that there’s “no feud or bad blood” between the two women, but the two have a long history of just that. The relationship first soured in 2002, when Murkowski’s father, Frank, overlooked Palin to replace him in the U.S. Senate when he was elected governor. Instead, he chose his daughter. The testy relationship continued up through Palin’s resignation last July from the governorship, when Murkowski released a statement saying she was “deeply disappointed” that Palin had chosen to “abandon the state and her constituents.”

Palin may be the most famous Alaskan that’s ever lived, and her support has been crucial to “mama grizzlies” on the Outside (Alaska-speak for anywhere outside the state), but it’s far from clear whether her support for Miller will help him.

The Murkowski campaign didn’t bother to respond to Palin’s scathing post. Their communications director, Steve Wackowski, sent out a statement that didn’t even mention Miller or Palin.

A survey from David Dittman, an Alaska Republican pollster, back in April (before Miller announced his candidacy) revealed that 62 percent of Alaskans believe Murkowski deserves re-election, with 29 percent wanting her out and 10 percent unsure — fairly healthy numbers for an incumbent. So while Palin's endorsement will boost Miller's visibility and help with his fundraising, Murkowski enters the race with enough popularity to make her tough to beat.

The consensus among Alaska political observers is that Palin’s move is a gesture of contempt for Murkowski much more than it is a statement of confidence in the ability of Miller, who before her endorsement was largely unknown in Alaska, to beat the senior senator.

Michael Carey, a columnist for the Anchorage Daily News and a longtime state political observer, was frank in describing the endorsement as merely a “screw you” to Murkowski because of their longtime feuding. “I don’t think at home it makes any difference at all,” Carey said, “Joe Miller probably doesn’t have a chance unless a miraculous event happens. Sarah Palin is not going to change that.”

That Palin is expected to have such a limited impact does suggest that there’s some Palin fatigue in her home state, more than there is on the Outside. Alaskans have heard about Palin for so many years, and many are just sick of continuing to hear about her day in and day out. Of course, as with many of her critics in the Lower 48, being bored of the coverage doesn’t mean they aren’t listening.

“Day after day the stories are a dime a dozen: ‘What is Sarah Palin doing today?’ And lots of people do pay attention, but I don’t think it influences behavior very much,” Carey said. “What she’s saying and doing, people are curious, but it doesn’t influence voting behavior here … so much of the news you read about her is negative: feuding, yelling at someone, or whipping them up, and making a lot of money. True believers love her, but a lot of people say, ‘I’m tired of the story.’”

Dittman has also been polling Palin’s home state approval ratings, and for the last year — and as recently as last week — they’ve hung around the 50 percent favorable, 50 percent unfavorable level. When compared with her stunning approval numbers when she was tapped to be John McCain’s vice-presidential pick — when her approvals were at an astonishing 80 percent and she was billed “the most popular governor in America” — this marks a serious decline.

Palin remains wildly popular with her fans in the Lower 48, and she was able to bring out large crowds at recent campaign events for John McCain in Arizona and Nikki Haley in South Carolina. In the first quarter of 2010, SarahPAC raked in $400,000, with more than $900,000 in cash on hand. Notably, as Talking Points Memo reported, according to Federal Election Commission reports, not one of those donations came from Alaska residents. In the second half of 2009, there were 33 donations from Alaskans out of 2,000 donations, in the first half of 2009, 29 donations came in.

It’s unclear whether Palin will campaign across the state with Miller or shoot a commercial for him, as she did with Haley. Most people examining the race doubt she will be involved more in than a single campaign appearance, if that.

“I don’t think it makes much difference,” says Gregg Erickson, editor at large of the well-respected (on both sides of the aisle) Alaska Budget Report. “Unless he shows something unknown at this time I don’t think he’s really a contender. The party is thoroughly behind Murkowski and [Republican] legislators are close to 100 percent behind Murkowski … I assume [Palin] is not going to expend a lot of her political capital on a foregone loser.”

Randy DeSoto, a friend of Miller’s from West Point who now lives in Pennsylvania, came up to Fairbanks, a city that at this time of year has almost 24 hours a day of sunlight, to be his press secretary. He said that the campaign has “gotten a lot of positive feedback” since the endorsement, but that no events with Palin are on the calendar.

“We don’t have anything scheduled,” DeSoto said. “We haven’t nailed down a commercial. We’ll see how the campaign unfolds.”

Palin’s backing will help Miller’s campaign financially, and he will need it. Dittman, who believes Palin’s backing of Miller “definitely makes a difference,” paints vastly different financial portraits of the two rivals.

“He’s got a long way to go; it’s a hard one,” Dittman said. “Sen. Murkowski has $2.5 million in the bank, and Miller is starting with zero. This will allow him to raise money. But it’s up to him to close the sale. I’d be surprised if he raised in the millions.”

Erickson agreed that it would be almost impossible for Miller to be viable even if Palin held a fundraiser for him. “If she came out and raised money for him, I’m sure she could get some people to come and donate. I wouldn’t be surprised, but I very much doubt she will do that, and it’s not enough money to give his campaign a realistic shot.”

Dittman said not to write Miller off, especially with the anti-incumbency mood nationwide. He says the endorsement will have more Alaska Republicans looking at his platform, but he believes Alaskans, more than people in other states, understand how seniority in Washington benefits their state — “Uncle” Ted Stevens and the federal money he was able to bring to Alaskans being the greatest example, one they don’t forget.

Erickson noted a key difference between Miller and some of the “mama grizzlies” Palin is currently backing, like Haley and Carly Fiorina in California. “In those places, she’s not campaigning for people who are long shots. She is picking fights carefully,” Erickson said.

“She could come up here. I don’t think it would change this election. It might change the votes, but it won’t change who the winner is, and that’s a big difference from those other elections … at the end of the day in November of 2010, the question will be, ‘Did Palin make a difference or not?’ The wins and losses will be added up, and if Miller is in the loss column, then that’s going to hurt her.”

Shushannah Walshe is the co-author of "Sarah from Alaska: The Sudden Rise and Brutal Education of a New Conservative Superstar."

Shushannah Walshe is the co-author of "Sarah From Alaska: The Sudden Rise and Brutal Education of a New Conservative Superstar" with Scott Conroy. She was a reporter and producer at the Fox News Channel from August 2001 until the end of the 2008 presidential campaign.