All hail iPhone 4 (until tomorrow)

Applause greets a Steve Jobs demo as the smart-phone future careens into the present, again 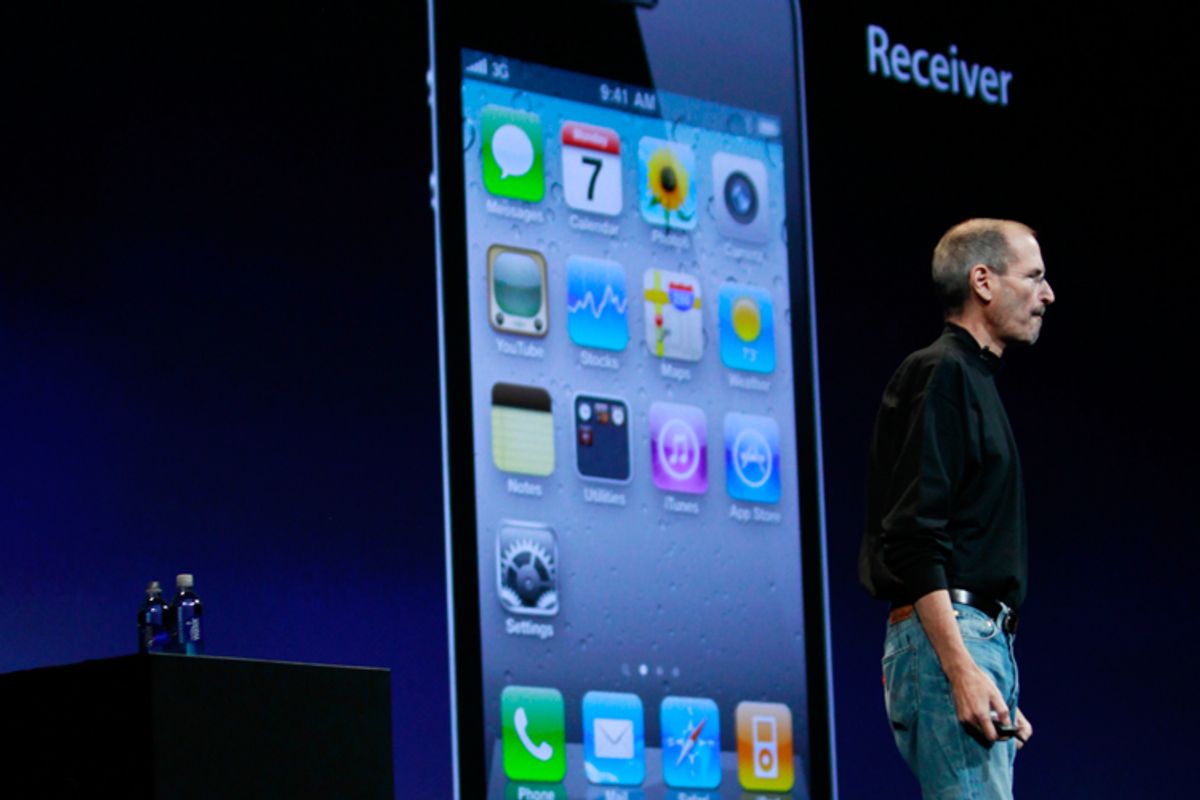 Reading the second-by-second updates on MacRumorsLive.com of Steve Jobs' iPhone 4 demo, I kept thinking back to a tweet from technology reporter Mat Honan earlier this morning:

While excited to see what Apple rolls out today, phones have become so amazing as to (counterintuitively) lose their wow factor for me.

There's some truth to this. A little over two months ago, I wrote about the amazing specifications of the HTC Evo 4G (which just debuted on the Sprint Network to great consumer applause and immediately sold out). But the iPhone 4 -- with its gyroscope-accelerometer combo that can detect motion on six axes, HD video recording and editing abilities, ultra-fine resolution, state-of-the art engineering design and oodles of other goodies -- looks, judging by the fervent reception at the Apple Worldwide Developers Conference (WWDC), to be yet another long jump/high jump/pole vault further into the smart-phone future. But how long before the iPhone 4 is selling for $97 at Wal-Mart? How long before the Droid Incredible (also sold out, also made by HTC) is surpassed by HTC's next entry in this game of leapfrog. September? October?

(And yes, I am aware that the iPhone 4 demo crashed embarrassingly when Jobs tried to show off its Wi-Fi ability to download the New York Times app, leading the Apple CEO to implore the attending bloggers to get off the network and stop congesting it. With Apple's track record, I'm going to give him the benefit of the doubt -- and I'm also betting that the bloggers were creating one crazy traffic jam, too.)

The fact that attendees at an Apple conference ooh and ah over a new iPhone demo is not remarkable. It is to be expected. But what is also to be expected, right now, is a pace of innovation in the smart-phone sector that is blowing away previous examples of fast-forward technological innovation. I find this amazing, because I've never seen anything like it. But to the generation that is currently being weened on new technology, there's nothing amazing at all about it -- it is standard operating procedure.

William Gibson (via Matthew Yglesias) gave a a fascinating talk at Book Expo America recently on the topic of Future Fatigue. He noted that in recent weeks there have been two mind-blowing announcements -- successful quantum teleportation in China, the creation of an artificial self-reproducing life form in Maryland -- but that "neither of these stories attracted a very great deal of attention."

Alvin Toffler warned us about Future Shock, but is this Future Fatigue? For the past decade or so, the only critics of science fiction I pay any attention to, all three of them, have been slyly declaring that the Future is over. I wouldn't blame anyone for assuming that this is akin to the declaration that history was over, and just as silly. But really I think they're talking about the capital-F Future, which in my lifetime has been a cult, if not a religion. People my age are products of the culture of the capital-F Future. The younger you are, the less you are a product of that. If you're fifteen or so, today, I suspect that you inhabit a sort of endless digital Now, a state of atemporality enabled by our increasingly efficient communal prosthetic memory. I also suspect that you don't know it, because, as anthropologists tell us, one cannot know one's own culture.

When you see a 3-year-old using the pinch-to-zoom feature on an iPhone you are looking straight at a member of a generation that will be inhabiting that endless digital now, delivered by that endlessly "wow" smart phone. What, I wonder, will they find to be amazed at?