To Palin, Huckabee and the National Review, the veteran White House reporter simply voiced the wrong kind of racism 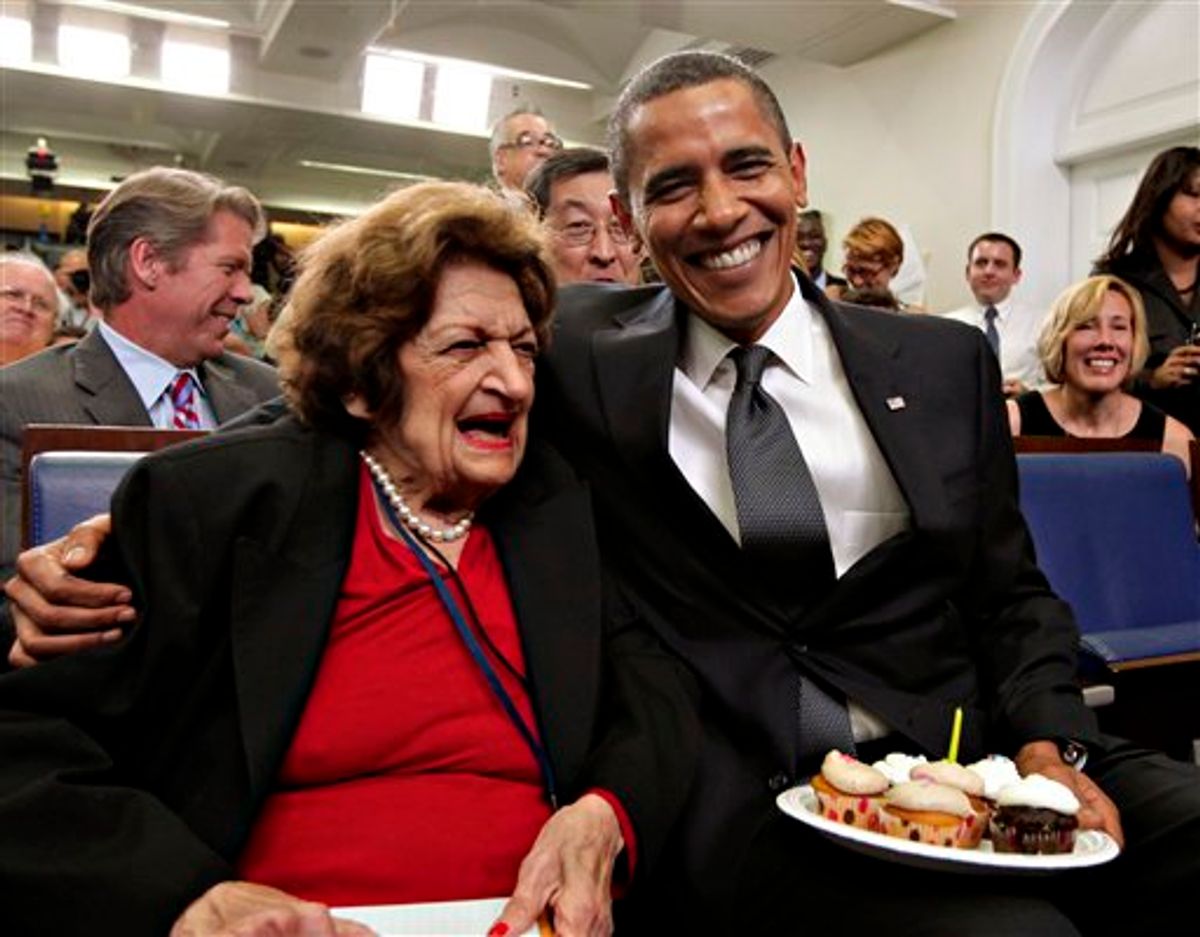 In much the same way that some of us on the left are fond of calling out racism among conservatives, right-wing commentators love little more than lobbing the accusation of anti-Semitism back our way. Normally, they aim way too wide, and wing a bunch of people who are plainly just reasonable critics of Israel. (As someone who's unmistakably Jewish in person, but lacks a particularly Jewish last name, I especially enjoy blogging about Israel and getting called a Jew-hater in the comments. On the Internet, nobody knows you're a Heeb.)

For once, though, conservatives are piling up on someone who really did cross some kind of line. Video recently emerged of veteran White House correspondent Helen Thomas saying, at the White House Jewish Heritage celebration last month, that Israel should "get the hell out of Palestine," and that Jews should "go home ... to Poland and Germany."

At the first part of that -- getting the hell out of Palestine -- I was thinking, "You tell 'em, Helen." But you can see where it gets problematic. You don't have to believe in the mystical connection of Jews to the Holy Land or even the initial wisdom of the Zionist project to recognize that, by now, with their parents and grandparents buried there, this is home for Jewish Israelis.

At the same time, however, the gross second half of an 89-year-old's rant is now being used to discredit the perfectly reasonable idea that Israel should, indeed, get the hell out of the occupied territories. Here's Jay Nordlinger, writing at the National Review Online (NRO):

Over the years, however, I have watched anti-Semitism become less stigmatized and less stigmatized, less taboo and less taboo. Before we know it, it may even be cool. That is very bad news. This anti-Semitism usually expresses itself in the anti-Israel temper. But there's a difference between being against the Jews and being against Israel, right? Of course there is. But it's strange how the world works out -- how people work out. I quote Paul Johnson: "Scratch a person who is anti-Israel, and you won't have to dig very far before you reach the anti-Semite underneath."

(Nordlinger then goes on to suggest that historian Tony Judt offers a cautionary example of slippage from legitimate criticism of Israeli policies toward criticism of Israel itself, which is beyond the pale. Judt, of course, is the child of Jewish refugees from Eastern Europe.)

Moreover, while they're busy wielding Thomas' statement like a club, conservatives are happily ignoring the fact that figures from their movement have made parallel comments, equally atrocious, about the Palestinians. And, unlike Thomas, they haven't even bothered to apologize.

Sarah Palin, for example, was quick to jump all over Thomas' comment. On Twitter, Palin wrote, "Helen Thomas press pals condone racist rant? Heaven forbid 'esteemed' press corps represent society's enlightened elite; Rest of us choose truth." (I've added some spaces in there to make it readable.) I'm not entirely sure what Palin means there, except that she's calling Thomas racist. Palin herself, however, has called for Israel to continue expanding settlement in Palestinian territory. This is, de facto, a call for Israel to deny the Palestinians a state, and eventually to expel them.

Then there's Mike Huckabee, who explicitly called for Israel to deport the Palestinians from the West Bank, so Israel could complete settling it. That's ethnic cleansing, folks. Scarcely a peep was to be heard from the right while major political figures like Huckabee and Palin -- not 89-year-old cranky columnists -- were calling for it.

Just moments ago, Jonah Goldberg wrote at NRO that the Thomas "scandal" isn't surprising at all, since everyone knows she's a "nasty piece of work" but liberals keep her around anyway:

Also, let's just get the liberal bias thing out of the way. If there was a rightwinger who'd spouted so much bile, hate and ideological agenda-driven nonsense in the White House briefing room for half a century it would be ... oh wait, no such person would have ever been allowed to become a Washington "institution" in the first place.

It's true. No conservative could ever have become a Washington institution similar to Thomas. Instead, the GOP would have seriously considered such a person to run the country, provided the right kind of racism was on display.

In other words, their problem with Thomas isn't that she’s in favor of uprooting an established ethnic community and shipping it out in the name of another group’s nationalist aspirations. She just chose the wrong group.