Are bustaurants the new food truck?

An L.A. entrepreneur brings the latest mobile dining gimmick to American shores -- but will it last? 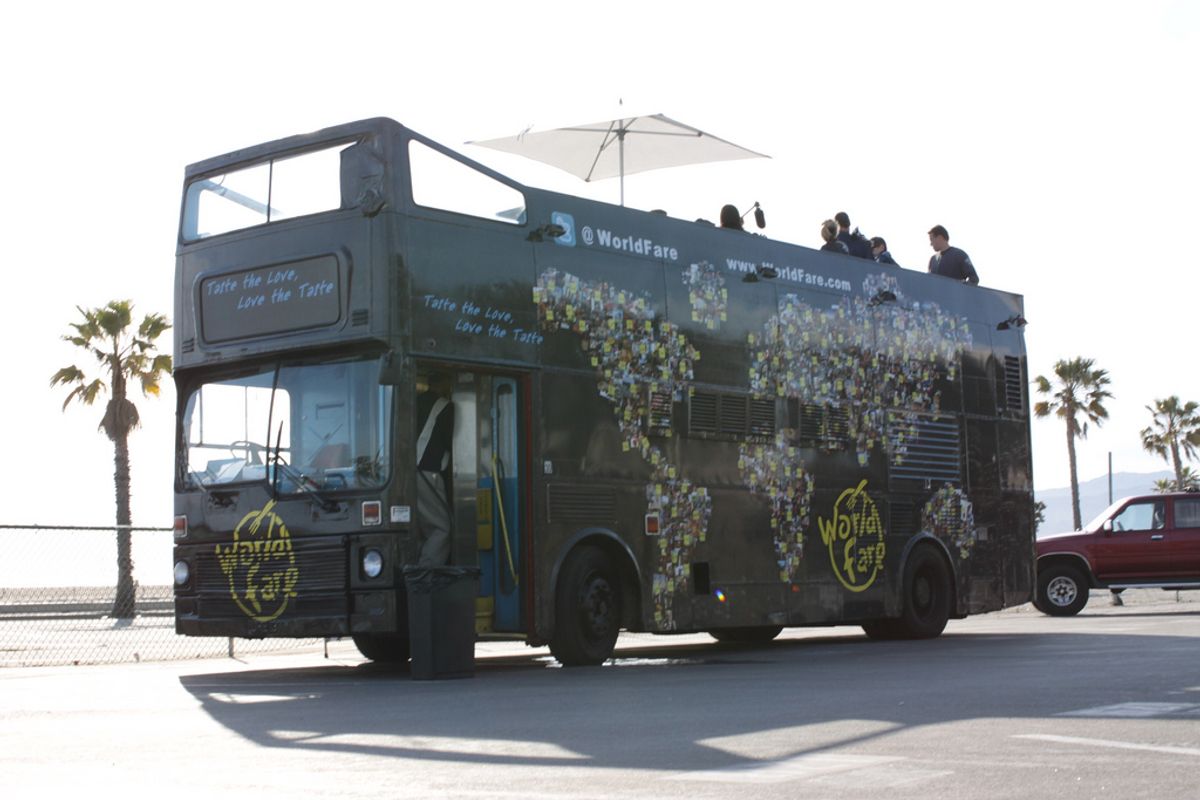 Ever since Kogi started dishing out kimchi quesadillas and hipster attitude on the streets of Los Angeles, the Twittering food truck trend has only gotten hotter. Critics proclaimed 2009 the year of the gourmet food truck, as trucks serving everything from designer cupcakes to Belgian waffles to Vietnamese banh mi spread across the country. But now, a new breed of restaurants is emerging and taking mobile dining to a whole other level -- literally.

World Fare, America's first official bustaurant, opened its doors in Los Angeles this past March. Like Kogi, World Fare uses Twitter to alert customers to its whereabouts. Diners order their food from the bus's street-level window, where they can peer into the full kitchen and watch chef Andi Van Willigan prepare their dishes. But while food trucks leave customers to fend for themselves once they have their plate in hand, World Fare's guests head upstairs and dine on the bus's  deck, where marble countertops, white umbrellas and views of the streets await. And for those who might be nervous about losing their lunch, don't worry -- the bustaurant does not move while customers are eating.

With the onslaught of gourmet trucks (with over 70 in L.A. alone), there is an acute need for the trucks to set themselves apart and appeal to particular audiences. As a result, food trucks often adopt more and more showmanly effects to stand out --  from New York's Big Gay Ice Cream Truck to a Washington, D.C., Indian food truck that features a traveling circus and servers wearing outlandish turbans and fake mustaches. On the surface, the bustaurant seems like the latest in a line of increasingly elaborate gimmicks.

The clearest precedent for the bustaurant may be theme restaurants, which gained popularity in the 1990s -- remember the supermodel-owned Fashion Cafe? From Planet Hollywood, Steven Spielberg’s Dive!, and David Copperfield’s magic-themed restaurant, these places clearly sold dinner as novelty entertainment. But when the market became oversaturated, the trend also lost steam as dining culture shifted away from excess and entertainment and toward a renewed emphasis on authenticity. Will the novelty attract customers and the quality hold them, or is bustauranting destined to suffer the whims of easily jaded novelty-seekers?

Obtaining the proper licenses and permits presents another problem. Bustaurants are subject to the same guidelines and procedures as food trucks: Construction plans must be approved by the health department, the kitchen and vehicle must be inspected by department officials, and a business license must be secured. But traditional regulations do not cover one of the bustaurant’s main innovations: the upstairs dining area. "We’re breaking new ground in terms of what’s allowed on the street and how it’s going to be allowed," explained World Fare owner Travis Schmidt. The L.A. County Health Department will hold a hearing later this month to determine whether World Fare’s dining area is permissible. Based on that hearing, there is a possibility that World Fare will have to close its upstairs deck -- which may not bode well for future bustaurateurs.

Then there's also pushback from neighboring restaurants and businesses, who complain that bustaurants have an unfair business advantage and are stealing their customers. Hugh Schick, chef and co-owner of the soon-to-be-launched bustaurant Le Truc, encountered several such protests from neighborhood merchant groups in San Francisco. Because parking is so difficult in the city, Schick hopes to station Le Truc in a private lot, which has proved more difficult than he anticipated. "Finding a location is endlessly problematic," Schick lamented. "Someone can go through the entire permit process, but then the neighborhood review could easily kill or significantly delay the project."

Still, more bustaurants are rolling out despite the possible setbacks. With the success of World Fare's first venture, Schmidt confirmed a second bustaurant is already in the works. Diamond Lil, a repurposed 1957 Greyhound, debuted in San Francisco in April. Le Truc will also open in San Francisco later this year. Chef and co-owner Schick plans to have an elaborate indoor dining room and state-of-the-art kitchen aboard the bus. He describes the cuisine as "Belgian Asian fusion" and will create beer pairing menus around beers from his own brewery, Le Truc Artisanal Beer Works. And it's no surprise that London -- the birthplace of the double-decker bus -- boasts the world's very first bustaurant. Root Master, a classic red double-decker that serves vegan cuisine, has been catering to hungry Brits since 2006.

The bustaurant phenomenon is just beginning to gain momentum. Coming months will prove whether it will radically reinvent the food truck -- or fall victim to the same demise as theme restaurants.