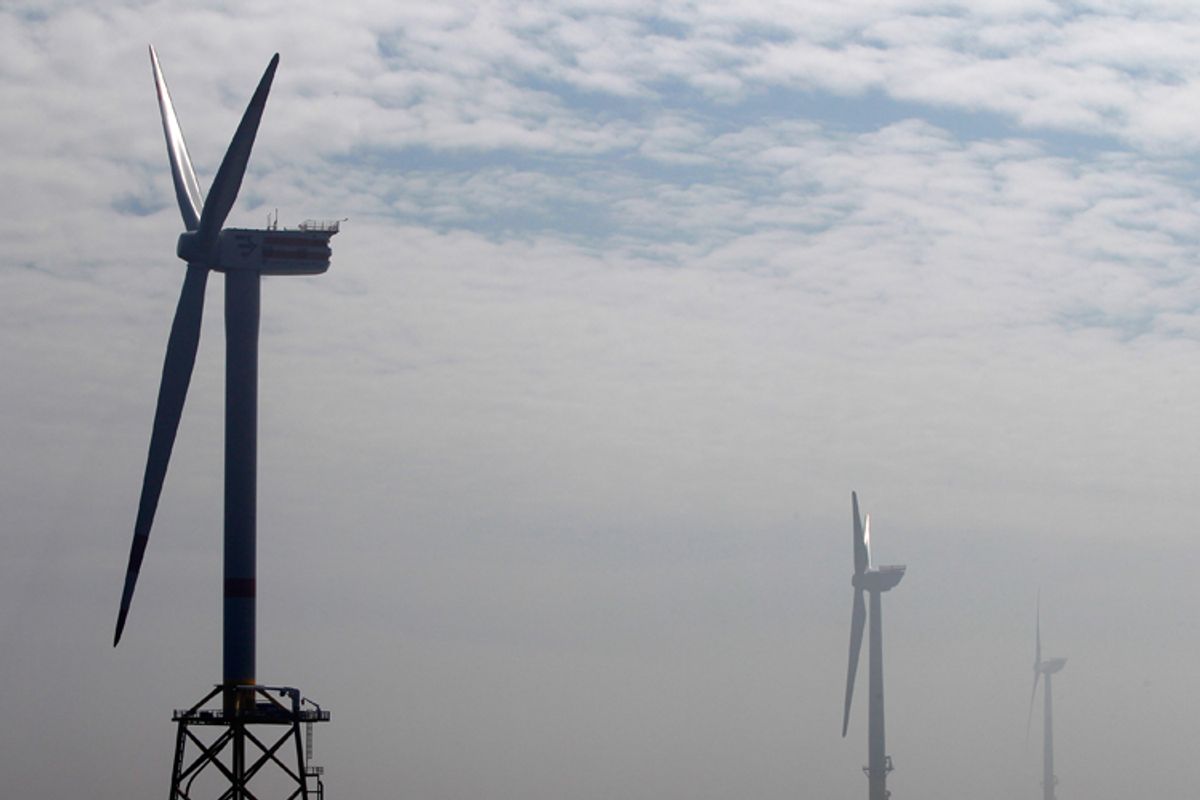 The U.S. economy is in trouble. Disappointing employment growth figures show that mass unemployment may be with us for some time. The stimulus spending in the U.S. was far too small and depended too much on tax cuts. State budget crises that result primarily from the Wall Street-created global crash, not statehouse mistakes, may yet cripple the economy, as the effect of federal stimulus spending wears off.

All of this strengthens the case for more government spending for years to come. After bailing out the states, the best use of federal dollars would be massive public investment in infrastructure that increases long-term U.S. economic growth. Like other capital improvements, infrastructure investment should be financed not by current taxes but rather by federal, state and local government or agency bonds. In the case of infrastructure assets that deliver benefits for generations, it makes sense to borrow in order to build them and to pay down the debt over decades. The faster the economy grows as a result of infrastructure investment, the less burdensome debt service will be. And we know from 200 years of experience that falling transportation costs and plummeting energy costs are among the major drivers of economic growth.

Unlike most conservatives and libertarians, most progressives support large-scale public investment in transportation and energy infrastructure to prop up aggregate demand in the short run and enhance national productivity in the long run. They are right to do so. Unfortunately, the progressive movement in the U.S. tends to focus its advocacy on the wrong infrastructure projects.

The center-left consensus favors massive government investment in an uneconomical form of transportation -- fixed-rail, in the form of light rail or high-speed intercity passenger rail -- and in uneconomical renewable energy sources: solar, wind and biomass. Why these particular infrastructures, rather than others? The answer is the fusion, in the last decade, of two previously distinct post-'60s activist movements on the left: urbanists, who despise suburbs, and Greens, who despise automobiles and airplanes. Many liberals have unthinkingly treated the goals of these single-issue movements as their own. But one can be a liberal in good standing -- by, for example, supporting a living wage, universal social insurance, and government-backed manufacturing policy -- and still reject the infrastructure agendas of urbanists and greens.

High-speed rail is the transportation technology of the future -- and always will be. In his 1964 State of the Union address, President Lyndon Johnson called for a national system of high-speed trains. Nothing happened. Then in the 1970s President Jimmy Carter repeated the call. Nothing happened. Then in 2009, President Barack Obama dusted off a bizarre map from the Carter administration, which for some reason had a high-speed connection between Houston and New Orleans rather than Houston and other Texas cities, and proclaimed that this was his plan. Then something finally happened -- but not much. The federal government announced modest funding for relatively short high-speed rail routes that might, if they are ever built, get tourists to Las Vegas and Disneyland slightly more rapidly than before.

High-speed rail in America is perpetually discussed and never built. There are two explanations. One, known as the "Roger Rabbit" theory, after the conspiracy theory about the decline of mass transit found in the movie "Roger Rabbit," holds that a conspiracy of oil companies, automobile manufacturers and real estate interests took over the U.S. government around World War II and killed off trolleys and passenger trains. The less dramatic but real reason is that federal and state officials repeatedly have concluded that the costs of high-speed rail proposals outweigh the benefits.

A train is a kind of expensive, pre-modern bus or truck caravan that can never change its route because it is fastened to the road. As nations grow more affluent, their people prefer the convenience of personal automobile transportation to the inflexibility of mass transit. This chart shows that the countries whose inhabitants rely the most on mass transit are poor ones -- Russia, China, Mexico. People in rich countries like Germany and Japan are much less likely than people in poor countries to use mass transit. Mass transit is used least by the inhabitants of the U.S., Canada and Australia, where low population densities make long-distance air and car travel more practical than passenger rail at any speed.

The tiny minority of Americans who regularly use mass transit rely chiefly on buses, not rail. Despite all the subsidies showered on Amtrak, private, unsubsidized bus service from Washington to New York is far less expensive than train travel. One-third of the people in the U.S. who take mass transit every day, and two-thirds of those who commute by rail, live in the New York metro area. In the unlikely event that other metro areas in the remote future become as dense as the New York region, more fixed rail transit might become practical. Until then, those who favor mass transit should favor cheaper and more flexible bus rapid transit, even if buses are less glamorous than bullet trains.

If fixed-rail mass transit is a transportation technology of the 19th century rather than of the 21st, what transportation investments make sense? The U.S. needs to reduce its imports and grow its exports by expanding its tradable goods sector. The emphasis should therefore be on lowering the costs of freight transportation, not on getting people out of cars and into trains. It is far more important to get goods from American factories, farms and mines to container ships bound for foreign consumers at lower cost than it is to cut five minutes off the daily commutes of office workers in New York and New Jersey. Focusing on freight infrastructure improvements means that, among other things, we need to build more highway lanes and in some cases new highways for the trucks that will continue to carry most freight. It also means paying for port expansion, freight rail modernization and upgrading our crucial but frequently ignored inland waterway system.

And passenger travel? Unless the U.S. shuts down immigration, the U.S. population is likely to grow to 400-600 million by 2050. If anti-sprawl campaigners try to prevent the construction of new roads to accommodate a few hundred million more Americans, they will fail. In addition to building more roads for passenger use as well as freight transportation, we need to build more airports in the U.S. to relieve congestion. Asphalt destined for highway and airport expansion lacks the gee-whiz factor of high-speed bullet trains, but it is much more important to the future of our economy. And asphalt has unimpeachable liberal credentials. Although Dwight Eisenhower gets the credit, it was Franklin Roosevelt who planned and lobbied for the interstate highway system that many of today’s urbanists and environmentalists denounce.

Concrete’s liberal pedigree is as impeccable as asphalt’s. Along with their nostalgic fixation on rail, the obsession of many progressives with non-hydroelectric renewable energy sources like solar and wind power is a relatively recent deviation from the more sensible New Deal liberal tradition. In the 1930s, Franklin Roosevelt presided over the most massive hydroelectric power dam construction projects in the world at the time. At Roosevelt’s instigation the U.S. government literally invented nuclear power with the Manhattan Project. It was only in the 1970s, when romantic environmentalists rooted in the older liberal Republican subculture gained influence in the Democratic Party, that Democrats began to demonize the energy sources and transportation modes favored by New Deal liberalism: dams, nuclear power plants, highways and aviation.

Beginning in the Carter years, it has become an article of faith among many liberals that we must replace fossil fuels and nuclear energy with renewable energy. In 1979, President Carter predicted that solar power in 2000 would contribute 30 percent of U.S. electricity. Today in 2010 solar power contributes less than 1 percent. Renewable energy generates around 10 percent of U.S. electricity and the overwhelming majority of that, nearly 7 percent, comes from the hydroelectric dams that many greens detest and want to dismantle. The second biggest source of renewable energy is inefficient, land-consuming biomass. Wind, geothermal and solar energy combined add up to little more than rounding errors.

According to the Energy Information Agency, in 2035 two-thirds of U.S. energy will come from coal and natural gas. Nuclear energy will provide another 20 percent. Renewable energy -- mostly from dams -- will rise from 8 percent today to around 14 percent. Wind and solar generation will still be rounding errors. There is no public support in the U.S. or any other industrial democracy for the combination of self-imposed austerity and massive subsidies that would be necessary to create an economy based on renewable energy.

What about global warming? Natural gas and nuclear energy, not wind and solar, should be central to the shift toward clean energy. Natural gas emits less than half the greenhouse gases that coal does and no particulate pollution. Nuclear energy emits no greenhouse gases at all. That is why rational greens including Stewart Brand, founder of the Whole Earth Catalogue, and James Lovelock, author of the Gaia theory, support nuclear power plant construction. Each technology has its problems -- natural gas fracking can contaminate groundwater, and nuclear waste must be stored safely and kept out of the hands of terrorists. But as Robert Bryce has argued in his important new book, "Power Hungry," anyone who is serious about reducing greenhouse gas emissions should support replacing coal in generating electricity with natural gas in the short run and with nuclear energy in the long run. While Bryce thinks that solar energy might play a minor role in the future, he emphasizes that, thanks to laws of physics that technology can never overcome, both solar and wind power require vast amounts of acreage for collection in order to produce meager amounts of energy: "More than 2500 skyscraper-sized wind turbines, spread over 500 miles of terrain, and a passel of natural gas units at 90 percent of wind’s maximum output -- and hundreds of miles of new transmission lines/voltage regulation -- would be required to provide parity with the capacity of a single 1500MW nuclear facility."

When it comes to energy issues, the Obama administration has been more reasonable than many of its supporters. True, the administration was embarrassed by its authorization of more offshore drilling shortly before the catastrophic BP spill. But President Obama and Energy Secretary Chu have supported loan guarantees for nuclear power plant construction and recognize that natural gas should play a greater role in the American energy mix.

The greatest economic crisis since the Depression shows no signs of ending soon. A major, long-term program of public investment is needed more than ever. But the public investments must pass the reality test. And the harsh reality is this: There isn’t going to be a significant high-speed rail system in the U.S. in the near- or medium-term future. There isn’t going to be a continental electric grid permitting solar panels on condo buildings in Berkeley, Calif., to power heirloom-poultry farms in Maine. Most Americans are not going to sell their cars and move back from the suburbs to the cities in order to live in tiny apartments or condos and ride the rails to work. These are romantic daydreams that Democrats could afford to indulge only as long as they were out of office and were not responsible for results.

During the Bush years, liberals took pride in describing themselves as "reality-based." When it comes to transportation and energy, the American center-left needs to get reality-based in a hurry.