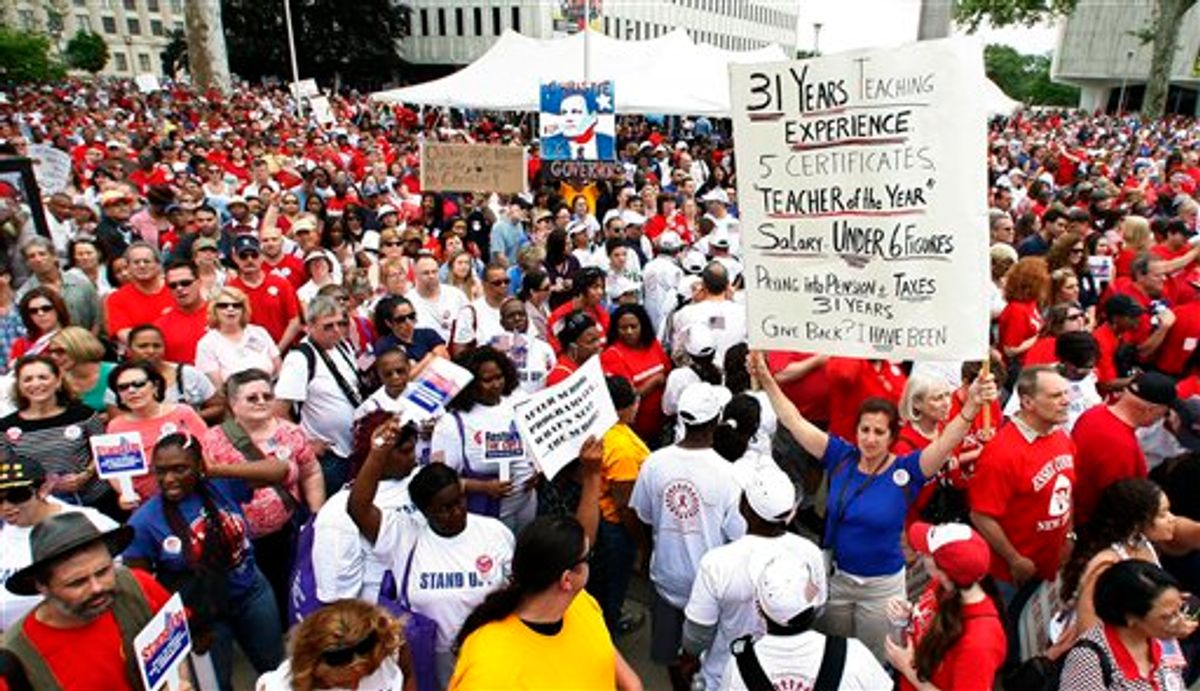 Thousands of people, some holding signs, fill the street near the New Jersey Statehouse during a rally Saturday, May 22, 2010, in Trenton, N.J., to protest Gov. Chris Christie's proposed budget cuts. Organizers say members of public employee unions hope a show of force will sway the state's top politicians to fight Christie. Gov. Christie has called for workers to accept wage freezes, and he's pushed for them to contribute toward their health benefits. (AP Photo/Mel Evans) (AP)
--

You know what we love doing in recessions? Dishing out blame. Conservatives think the housing bubble was inflated by liberal legislation, community activists and, ultimately, irresponsible poor people. Liberals think the job was done by risk addicts on Wall Street. But now that we're in the tank, state governors of both parties are coming to agree on whose fault their current budget problems are.

Politico ran a story yesterday about how state politicians are turning against organized labor. In particular, unions representing government employees are now public enemies, as far as a pack of governors with tough budget-cutting to do are concerned.

The argument is that public sector unionism has run out of control. Critics say that unions, with their immense political strength, have managed to browbeat politicians, especially Democrats, and extract pay, benefits and privileges that are burdensome to the state and costly in a variety of ways to the public interest. With state budgets everywhere in the tank thanks to the recession, officials see unions sitting on an ill-gotten pile of cash.

As Politico sums up, public employee unions are "the whipping boys for a new generation of governors who, thanks to a tanking economy and an assist from editorial boards, feel freer than ever to make political targets out of what was once a protected liberal class of teachers, cops, and other public servants."

In California, Gov. Arnold Schwarzenegger is in a protracted battle with his state's large public employees unions. He argues, "People understand that they have to lay off their workers or they don't have the money for their family. What they don’t like is when there is a certain group that doesn’t like to make the sacrifices." Illinois Gov. Pat Quinn, a Democrat, recently signed a bill to rein in pensions. New Jersey Gov. Chris Christie got attention recently for an angry exchange with a teacher, caught on video. "You don’t have to [teach]," Christie berated. Gov. Tim Pawlenty of Minnesota, a likely presidential candidate, thinks there’s a margin to be had in public opinion here too. "If you inform the public and workers in the private sector about the inflated benefits and compensation packages of public employees, and then you remind the taxpayers that they’re footing the bill for that -- they get on the reform train pretty quickly."

Look, I'll grant that public employee unionism is a more complicated issue than private sector unionism. Money that doesn't go to factory workers goes to the company. But money that doesn't go to cops or teachers will be spent by the public in some other way. And it's also been documented pretty abundantly now that some public sector unions -- in particular, the teachers and the prison guards -- have defended harmful policies that benefit them. While I'm not generally sympathetic to management strategies for keeping up labor discipline, keeping teachers on task and effective is another issue. Likewise, you know who loves California's poisonous three strikes law? The prison guards. You can guess why.

So, no, public sector unions don't deserve all the sympathy that their private sector counterparts do. (Unfortunately, public sector unions are almost all that’s left of the union movement.) There are some legitimate complaints here. At the same time, it's a pretty gross spectacle, when politicians who've spent their whole careers chipping away at the public obligations of the wealthy decide that it's the state-employed middle-class -- teachers, cops, firefighters and nurses -- that's to blame for everything. Indiana Gov. Mitch Daniels epitomizes the problem, with an are-you-kidding-me quote given to Politico:

We have a new privileged class in America. We used to think of government workers as underpaid public servants. Now they are better paid than the people who pay their salaries. It's a part of a very large question the nation's got to face. Who serves whom here? Is the public sector -- as some of us have always thought -- there to serve the rest of society? Or is it the other way around?

In 2008-2009, the average Indiana teacher made $47,602. To call a teacher making that amount a member of the "new privileged class" takes some chutzpah. Has Daniels not heard any of the news from Wall Street for the last year or so? Or how about that time when his party opposed the stimulus bill almost unanimously, even though it mitigated the budget pain he's now complaining about? Worst of all, Daniels was the director of the budget office in the first-term Bush White House. That makes him the author of the most unequal tax cuts in modern U.S. history. And he thinks nurses and the people who work at the DMV have lately obtained unfair new privilege?

I understand that the expression here is "public servant," but guys like Daniels appear to want to take it literally. But the fact that democratic governments serve the people doesn't literally make public sector workers into servants. When Daniels said these workers are the "new privileged class," he was speaking in relative terms: they're more privileged then he wants them to be, and it's inconvenient to him and the rich people he represents. In other words, they're uppity. Likewise for Christie and the teacher he yelled at. "You don’t have to teach" is one thought ahead of, "Do you know how easily I can replace you?" That's not exactly inspirational material for a Teach for America promotional brochure, is it?

Not everything public employees' unions do is great. But state workers are not servants, and making middle-class salaries doesn't rocket them up to "newly privileged" status, either. They are workers -- workers with unique responsibilities, but with rights and dignity nonetheless. For the GOP (and even some Democrats) to turn on them as the featherbedding, dollar-bill-burning villains behind state budget crunches is dishonest and nasty, when the party has consistently blocked any attempt to raise revenue from the actual privileged class, as well as opposed new stimulus measures at the federal level to take this pressure off states. People on the left wing should speak honestly about issues where union interests are an obstacle, like reforming schools and prisons. But if they don't honor some obligations to workers, then what good is having a left wing anyway?