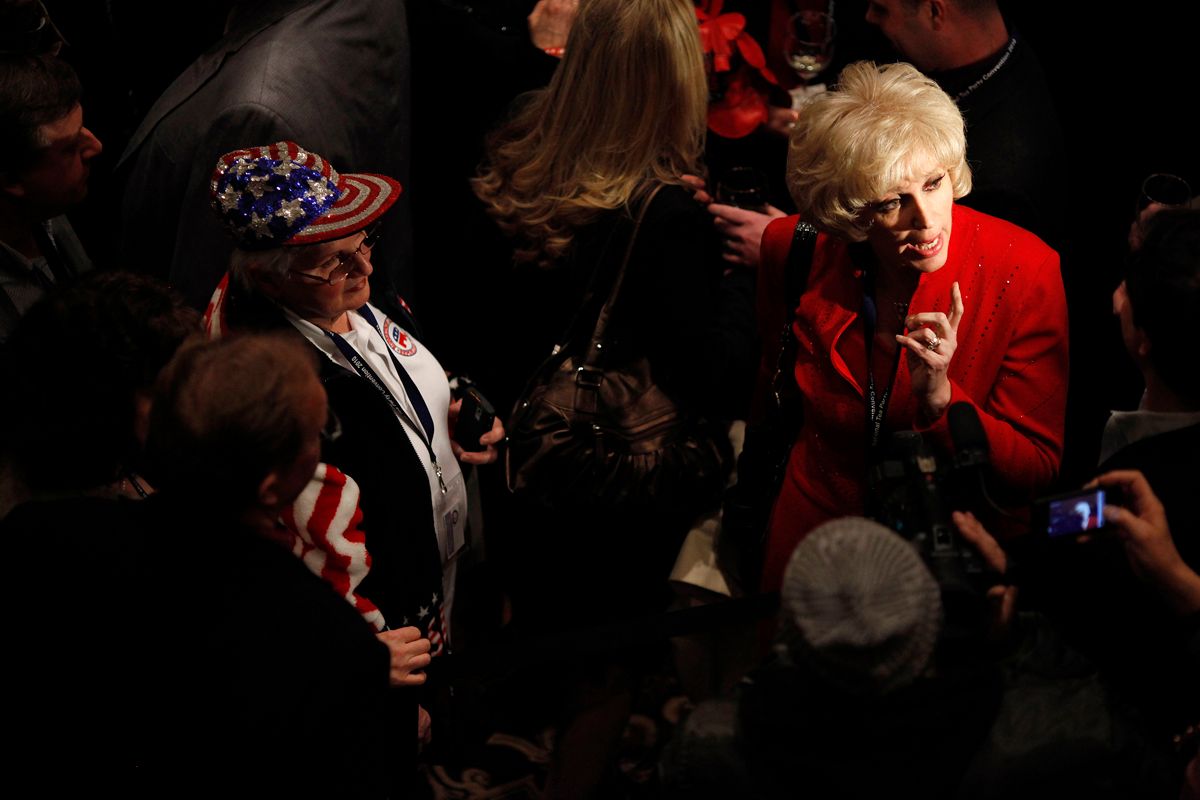 I just exercised my franchise as a California voter, and hoo boy, the pickings were slim. On the Democratic side, most of the primary races were uncontested. I dutifully voted for a bond measure supporting public pools in Berkeley and rejected nearly all of the propositions on the ballot, including one that would have created an open primary in California in which the top two vote-getters, irrespective of party affiliation, would advance to the general election.

I did think twice about that one, however, because if California currently operated under such rules, I would have had the pleasure of seeing the name of Orly Taitz on my ballot. The Queen Bee of the Birthers is running for secretary of state on the Republican side, but only Republicans get to to vote in the Republican primary.

My state is so awesome. Orly Taitz, who does a better imitation of a legitimately crazy person that most raving psychopaths, is running for office and may even win a primary. I can't say I'm too shocked: After all, I live in a state currently governed by a man most famous for playing a killer robot from the future.

But it's still crazy. Crazy! Crazy, crazy, crazy. I have read legal filings submitted by Orly Taitz and I have watched her doomed attempts to form coherent sentences on television news shows and I have read her blog, and the thought that she might actually one day be elected to an office of governmental responsibility fills me with deeper terror than even the prospect of mass-murdering machines from the future laying waste to all I hold dear.

I'm thinking that maybe I should have switched my party registration just to vote no. Because today could be the beginning of the great Orly Taitz climb to power, and in the years to come, those of us who could have stopped her might rue the day. First a primary win in a light-turnout off-year election, then a general election victory fueled by California Tea Party rage ... four years from now, she'd be a shoo-in for governor of California. And then ... a couple of years after that ...?

Oh wait -- Orly Taitz was born in 1960 in Moldova, formerly part of the Soviet Union. So she is not a natural-born American citizen, and thus she, like your average time-traveling Austrian-accented death-dealing automaton, isn't eligible to be president of the United States.

A grateful nation wipes its brow. Disaster averted! There will be no President Taitz.

Unless ... Who alive today knows more about how to forge a birth certificate than Orly, scourge of the Manchurian Obama candidate? How long before we suddenly find out that Taitz was actually born in Texas (or Hawaii, a state notorious for bad birth certificate record keeping) and spirited away to the USSR by parents who were mortally distraught at Jack Kennedy's (stolen) victory over Richard Nixon?

I swear to you now, dear readers, that having failed you once by not finding a way to vote against Orly Taitz in her first run for office, I will not fail you again, should she emerge victorious, and set off on her path to the White House. I will become Orly's Orly, scourge of the Birther scourge, relentlessly exposing her trail of identity fraud terror. It's the least I can do.

I'm starting now. I demand to see Orly Taitz's Moldovan birth certificate, to prove that is real. Why hasn't she shown it to us already? What's she trying to hide?