How to make "Glee" sing in its second season

Seven ways to improve one of the most inspired, inconsistent, awkward TV shows of the year 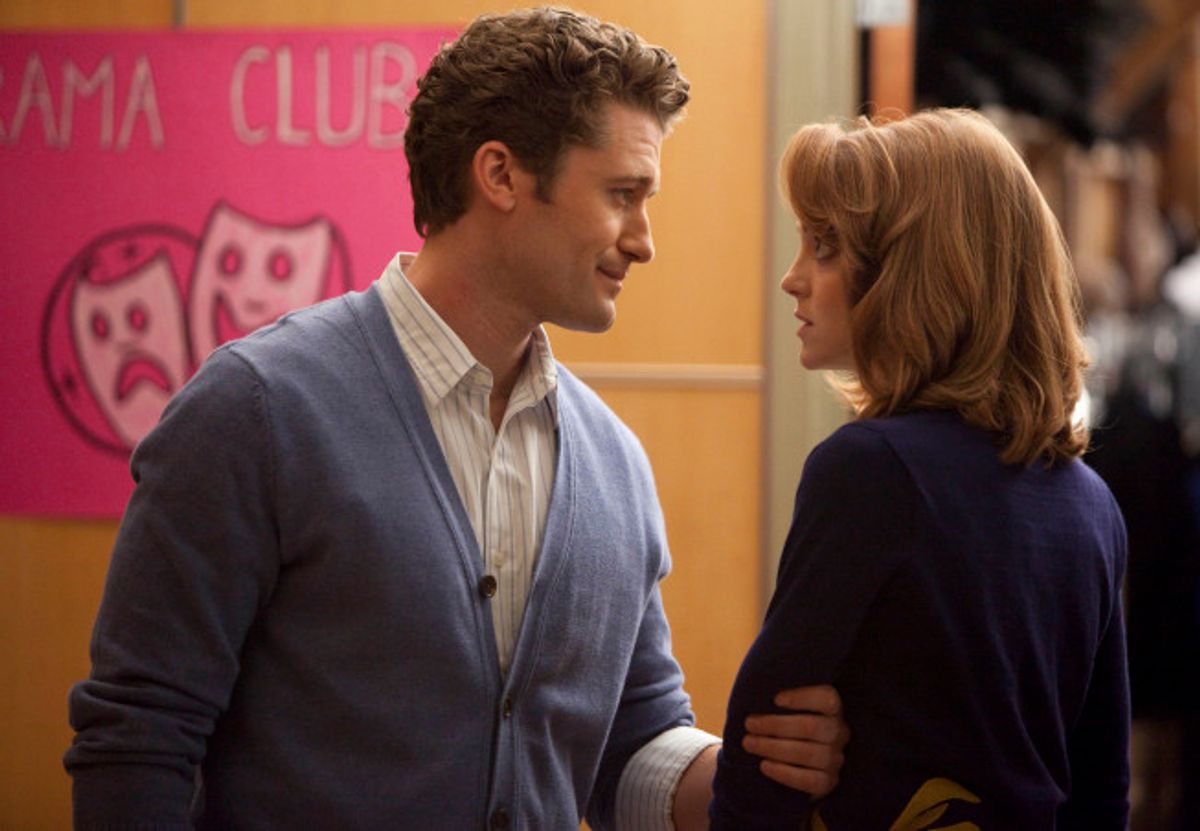 "Glee" may go down as one of the most promising but inconsistent, thrilling but hopelessly awkward dramas in TV history. After starting off with a bang last fall and becoming a big hit overnight, the show stumbled with stilted performances, droopy storylines and clunky, overwritten dialogue.

Even so, it's tough not to cheer for "Glee," admire its ambition, hope that it might regain its former glory. This deliriously silly, over-the-top love letter to high school and show choirs and geeks and masochistic cheerleading coaches still has its peculiar charms. Just like an actual teenager, "Glee" is moody. It vacillates between being snide and earnest, mean-spirited and sappy, dour and bubbly. Although the overarching tone of this show lingers in the danger zone of too-earnest-to-stomach, it offers a sly take on our pop cultural moment, on the perversely sophisticated yet hopelessly naïve perspectives of teenagers, on the paradoxes and trials and juvenile dependencies of the modern adult. Like overachieving, compulsive starlet Rachel (Lea Michele) herself, "Glee" teeters on the brink of brilliance, then manages to mess everything up anyway.

Now that the first season has finally come to an end, with a big, Journey-filled bang, here's hoping that this fall, "Glee's" talented producers can avoid some of the pitfalls that threatened to turn this vibrant show into the most rapid flameout of the 2010 TV season. Here's my take on how to ensure that "Glee" reaches its full potential in its sophomore season:

1. Cut out the psychobabble!

This is Dramatic Writing 101: Characters who march around communicating clearly, explaining everything to each other and admitting their own particular psychological shortcomings are characters that leave nothing for the audience to figure out for themselves.

Quinn to Mr. Schu: You really think I can get it all back again?

Rachel to Jesse: I have this pathological need to be popular.

Jesse to Rachel: I should've been enough for you, Rachel!

Jane to Emma: If you want to get better, you need to start communicating your feelings.

Rachel to Puck: You need a song that's going to help you to express your inner pain!

Mercedes to Mr. Schu: You are glee club. You're in all of us now.

How did we wander into this group therapy session, and when will it end? Psychobabble was just fine on "Glee" creator Ryan Murphy's "Nip/Tuck," since that show is filled with scary humans who run around threatening and undermining each other using their 2-cent psychoanalysis. Here, the babble is twisted into a much less savory form: on-the-nose assessments, self-esteem boosters and You-Go-Girl-isms that not only sound absolutely out of place, but block the dramatic momentum every time they rear their ugly heads. Don't tell us everything. Leave us some subtext to uncover. Great characters layer over their feelings with coded small talk. Even on "Six Feet Under," the psychobabbliest show ever, they argued about the wine instead of addressing their underlying resentments. Rent all five seasons of that show and then rethink your compulsive attachment to laying out every single motivation and pathology for your viewers. Your new mantra should be: Shut up and sing.

2. When in doubt, give Mercedes (and the cheerleading dance crew) center stage.

When your mind goes back to some of the best musical numbers of "Glee's" first season – "Beautiful" by Christina Aguilera, performed at the school assembly, "Break Your Windows" by Jazmine Sullivan -- who do you see the most often? Amber Riley, who has a giant voice and dynamic performance style but who never, ever makes her songs feel stilted, strained, goofy, or out of place -- ever. Mercedes is not only one of the show's most likable characters, but she brings exactly the right spirit of showmanship and sophistication to her pieces. Throw in the cheerleaders (and if possible, the marching band! Fleetwood Mac's Tusk?), and you've got a winner.

3. Break Sue Sylvester out of her repetitive villain role.

"I am going to crush the Glee club if it's the last thing I do!" Sue Sylvester told us in the first episode of the first season, and she's said the same thing in every single episode since. This is what you do with the funniest woman on the show? You give her the exact same storyline in every single episode? You have a whole summer ahead. Think of something new for Jane Lynch to do besides sucking down energy drinks and insulting Will's hair. Her change of heart in the finale -- kept to herself, of course -- suggests we might be headed in that direction.

4. Keep Will Schuester in check.

We've been trying to forget boy bands for well over two decades now, but here's Mr. Schu (Matthew Morrison), bringing all the agony of New Kids and 'N Sync back for us with his funky white boy snapping and jiving, with his growly soul voice and his gelled hair. It's time for someone to say to Mr. Schu: Tell, don't show. Because we don't need you turning Kanye West and Young MC and yes, even Vanilla Ice into something that makes us all feel dirty and shameful inside. Next time, let's give one of the kids a shot at the hip hop, and leave Mr. Schu out of it.

5. Give more performances to Santana, the brown-haired cheerleader.

Did you notice, when the girls were singing and dancing to Lady Gaga's "Bad Romance," how fantastic Santana (Naya Rivera) was? This woman has an impressive voice and a strong stage presence. Why isn't she performing solos occasionally? This makes "Glee" a lot like an actual high school show choir, where the same two teacher's pets are handed all of the best songs. While Finn and Rachel might dominate the storylines most of the time, we simply can't watch those two perform again and again and again, because it's boring. Rachel has a beautiful voice, so does Finn, but they're both a little one-note, let's face it. Same moves, same expressions, same sorts of songs. Plumb the depths of the cast and find more interesting performers there, starting with Santana.

6. Make Kurt one of the lead characters of the show, and give him the prominent storylines to match.

We all love Kurt. Chris Colfer is brilliant and has an amazing voice and stage presence. Give this guy a boyfriend. Give him a dog. Give him a castle. Give him anything he wants, because he is sheer perfection. His performance of "Single Ladies" was hysterical and one of the best of the season. His bit with the interior decorating swatchboard for his and Finn's shared room was genius. Dream up some crazy stories for the guy, because he can pull them off, he's proven that. And we would much, much rather learn more about him than Rachel and Finn.

You've done the equivalent of "The Big Chill" soundtrack several times over. We know all of those R&B classics by now. Consider any song that played in a Nora Ephron film off limits. Throw out everything by Journey. And no, we don't need to hear Sinatra again – it plays at the local outdoor mall five times a day, and how can New Directions possibly compete with a giant dancing water fountain? We've been through all of the '80s hits from "Can't Touch This" to "Another One Bites The Dust." In "Glee's" second season, it's time to get a little more eclectic. First of all, there's Cole Porter, one of the greatest songwriters ever. Can't you imagine the choir singing a really restrained version of "In the Still of the Night" that starts very, very softly and builds? But don't limit yourself to old-school classics and pop hits. How about Mercedes singing a Nina Simone-style version of Leonard Cohen's "Suzanne"? Does every single song have to fit into some storyline? Why should it? Why not throw Sufjan Stevens' "Chicago" or "For the Widows in Paradise" into the mix? How about the rollicking weirdness of Kate Bush's "Suspended in Gaffa"? Doesn't Bon Iver's "Re: Stacks" just cry out for a melancholy library scene between two heartsick kids? As long as you're catering to the former frat boy demographic, is it so hard to imagine a really odd arrangement of Bob Marley that the choir might tackle?

The point is, don't be afraid to take risks and get a little crazy. And now that I sound just like Will Schuster, I'll call it a night. Let's salute "Glee" for its bold, ambitious, uneven first season, and hope for a fantastic second season this fall.