When an incumbent came under fire, a rebranded Democratic Party saved the day -- by turning on labor 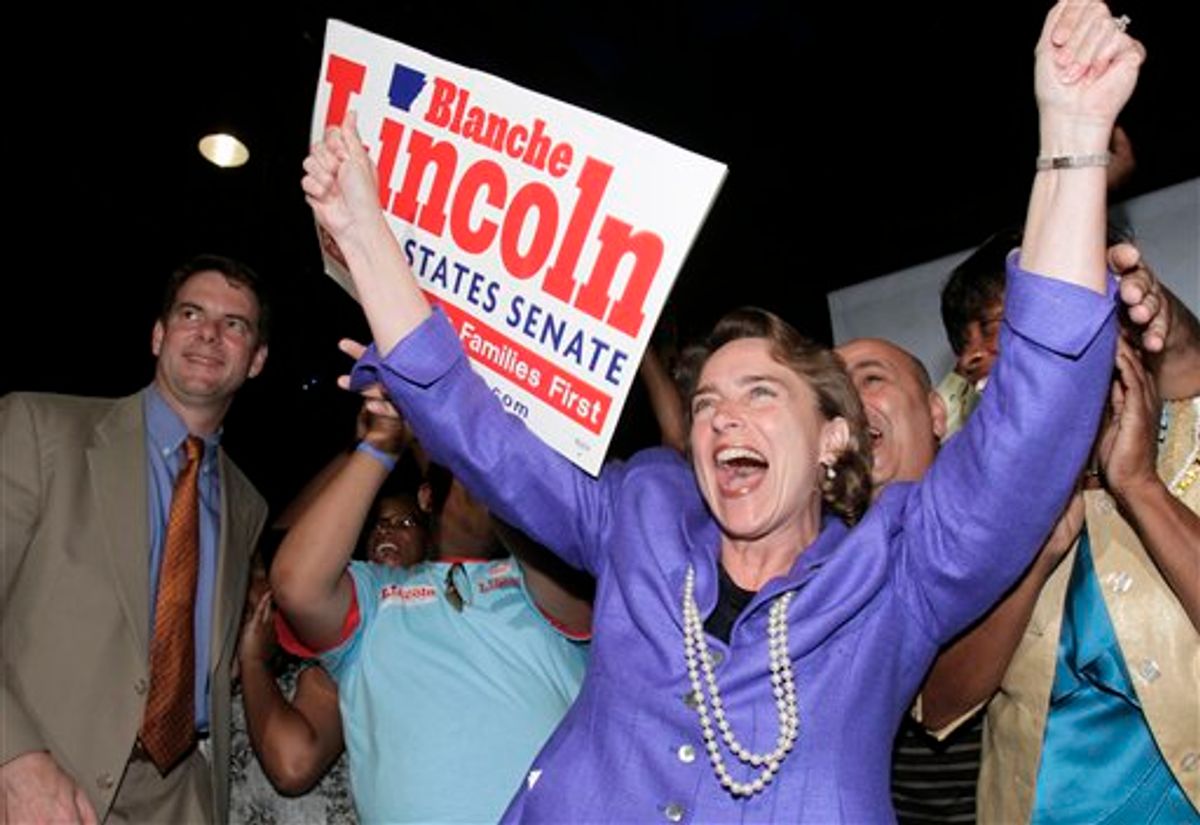 For an entity that's supposedly the bought-and-paid-for servant of organized labor, the Democratic Party sure has a hell of a way of showing it. When it looked like Arkansas Lt. Gov. Bill Halter's labor-backed challenge to Sen. Blanche Lincoln in the Democratic primary was going to succeed, Lincoln's backers in the Democratic establishment tried to turn the race into a referendum on organized labor. And it worked. Lincoln won her primary last night. Then her allies turned on the unions for not toeing the party line. In other words, the critics have it backward: it's not Democrats who are supposed to act like labor's servants, it's labor that's expected to act like it belongs to the party, with no reciprocal obligations.

First of all, though, maybe we all got a little ahead of ourselves in imagining that Halter had this thing sewn up. He was never ahead by more than a few points in a few polls. So it might be that Lincoln's comeback doesn’t need that much analysis at all. These things happen all the time.

But if we’re going to analyze it, here are some things to keep in mind: Like every Southern state, Arkansas is right-to-work, meaning that it has labor laws that are particularly unfriendly to unions. It has the sixth lowest union density in the country, and is home to Wal-Mart, the bugbear of the union movement.

Moreover, the South has always been the graveyard of the union movement. Southern companies traditionally manage the most hard-assed opposition to unions, and they have a long legacy of success to draw on. For over a century, Southern conservatives have labeled union activists as radicals and meddlers, likely to endanger what Southern workers hold dear. In the 1940s, the CIO (it hadn't yet merged with the AFL) ran a major effort to organize Southern industry, and to elect friendly politicians alongside. After some initial success, the CIO saw its two best Southern friends in the Senate -- Florida's Claude Pepper and North Carolina's Frank Graham -- go down unexpectedly in 1950 primary challenges. The lesson then, as now, was that it's not really in the power of organized labor to determine Southern elections. Yesterday, labor relearned the ironic lesson that endless millionaire vanity candidates have been taught: Spending a big pile of money on a campaign can't make up for a missing base of institutional support or a determined opposition that does have one.

The way conservative Democrats ran against Pepper and Graham and bashed the CIO in earlier years is much the same as the way they stood up for Lincoln. One newspaper warned in the late 1930s, "The record proves undeniably that when friction and fighting arises in a community, especially among the Anglo-Saxons of the South, it is the result of the deliberate efforts of outsiders who come in for the specific purposes of creating disturbances." A Georgia radio host captured the essence of Southern anti-union rhetoric when he said in 1946, "Do you value your independence as a Southern American? The unsophisticated Southerner, never having seen nor experienced the North, may listen to this alluring [union] propaganda not realizing that he is surrendering … independence and personal freedom." (I've lifted these examples from historian Michelle Brattain's book, "The Politics of Whiteness.")

Compare that talk with Bill Clinton's, campaigning for Lincoln. The unions, Clinton accused, are "using you and manipulating your vote." They wanted to make Lincoln a poster child for "what happens when a Democrat crosses us." Lincoln herself refers to the unions backing Halter as "those D.C. unions." On Monday, she said, "Tomorrow, when all those outsiders who flooded the state get back on their airplanes and buses to go back where they came from, our campaign will stay rooted right here in Arkansas." Get it?

SEIU and AFSCME, the two major unions backing Halter, have always denied that they were outsiders invading Arkansas, looking for the scalp of a disobedient senator. But they've got to deny it, even though it's obviously what they were doing. Lincoln, a senator beloved by the Chamber of Commerce, helped kill the public option and the Employee Free Choice Act -- labor's top  priority. And she only tacked left on financial reform because of the primary challenge. So it's entirely appropriate that organized labor would try to hold her to account. But with no base of their own in the state, the unions ran headlong into the obstacle that's always blocked them in the South: business-backed conservative Democrats, like Clinton and Lincoln, who are willing to stick together against labor.

What's worse, the White House has made pretty clear what it thinks of labor's efforts to stand up for itself. An anonymous senior official who sounds a lot like Chief of Staff Rahm Emanuel told Politico's Ben Smith last night, "Organized labor just flushed $10 million of their members' money down the toilet on a pointless exercise. If even half that total had been well-targeted and applied in key House races across this country, that could have made a real difference in November."

Actually, $5 million wouldn’t amount to that much in the grand scheme of the fight for Congress. The Democratic Congressional Campaign Committee has already raised $80 million this year, and spent $53 million in the 2010 cycle. And the real action hasn't gotten going yet. All of that is on top of spending by actual candidates, and given the rapidly diminishing returns on massive campaign expenditures, an extra $5 million probably wouldn't make a "real difference."

But that's not the real point the senior official was making. What's being said there, instead, is that organized labor is just an adjunct to the Democrats. Unions shouldn't expect to get the party to move on their main issues, and they shouldn't fight about it. The best they can hope for is that Democrats stay in power and keep workers from being screwed too fast or too dramatically.

Imagine if the president and Bill Clinton had instead thrown in with Halter. I know it's unthinkable for establishment Democrats to do this kind of thing, but just play along: What if they had said that it's important for Democrats to understand that there are consequences for a senator who repeatedly betrays her party and the progressive agenda? It's hard to imagine Lincoln could have pulled it out with Clinton campaigning against her.

In other words, elite Democrats had a real choice, and they decided to stand with the Chamber of Commerce and treat the unions like the misbehaving hired help. They ran the same campaign that conservative Southern Democrats have been running for the better part of a century to keep labor out of the South, and it worked.

But this is the campaign that has been undercutting progressives in general for decades. As long as labor is weak in the South, it's weak everywhere. Runaway plants move from union-friendly states to right-to-work ones like Arkansas, killing the unions where they're strong and driving down wages. Without strong unions, working-class voters are much less likely to vote for progressives, or even Democrats at all. And why should they? With wages stagnant and inequality constantly growing, how much has mainstream center-center-left liberalism shown that it still has to offer?

The direction we're headed in, judging by that White House official, is for Democrats to show the door to working-class voters. For years, Democratic leaders have desperately wanted theirs to be the party of upper-middle-class suburban professionals. And if Blanche Lincoln loses in November to her Republican challenger, as she probably will, all we'll be able to say is that Democrats got their wish: They wrote off working people, and working people wrote them off too.