After being freed from prison for attempting marriage, they call it quits. Also: Why they aren't actually "gay" 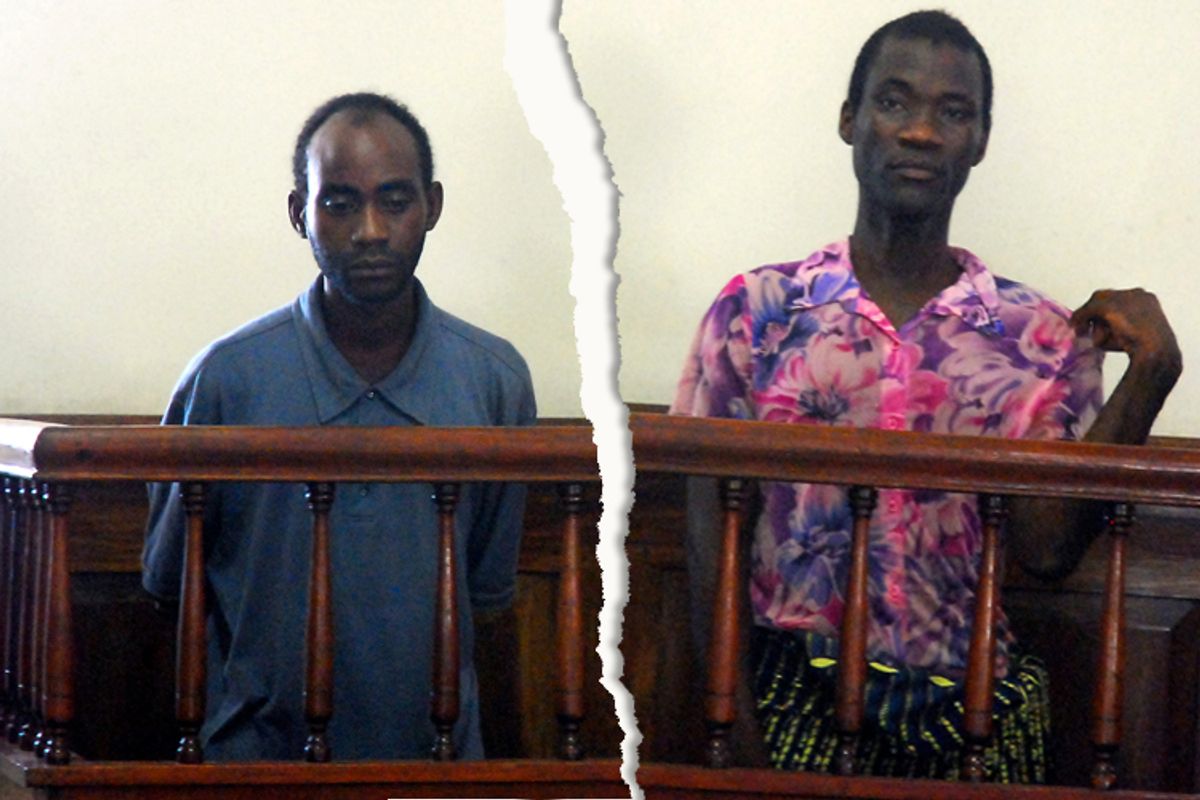 Steven Monjeza and Tiwonge Chimbalanga appear before a magistrate court in Malawi in January.
--

Steven Monjeza and Tiwonge Chimbalanga, reportedly the first "gay" couple to attempt marriage in Malawi, were recently released from jail after six months of imprisonment. Just a week later, though, Monjeza has found a new partner -- and her name is Dorothy.

There were signs of the split during the trial: "I have had enough," he said. "I was forced into the whole drama and I regret the whole episode. I want to live a normal life ... not a life where I would be watched by everyone, booed and teased." Gay rights campaigners blame the couple's breakup on fears of violent retribution. Monjeza's uncle was reportedly determined to prevent them from getting back together after being released. Chimbalanga was warned not to set foot in the village or they would "deal with him." Queerty writes that Monjeza's sudden conversion hints at societal pressure and quotes him as saying that he didn't want to be associated with "gay trash."

But can Monjeza even be considered a gay man? Major newspapers certainly think so, and many gay blogs have claimed him for their cause. But back at home, Chimbalanga, who has long hair and wears dresses and head wraps, was considered a woman. In an article headlined, "Gay couple convicted in Malawi," the New York Times reported that Chimbalanga constantly referred "to himself as 'Auntie Tiwo' and insisted that he was a woman." The reluctance to call Tiwonge a woman, even if she explicitly identified herself as such, reflects the "typical invisibility of the transgender community, in a culture that's uncomfortable with transgenderism," Nancy Nangeroni, chair of the Massachusetts Transgender Political Coalition, told Bay Windows. "It's either we're being sensationalized or we're being ignored, and in this case we're being ignored."

Blogger Autumn Sandeen argues that there's a reason gay rights, rather than transgender rights, were championed in this case: "I believe we can safely say that from past coverage by the LGBT press and LGBT blogosphere that this story would not have gained as much traction in LGBT media if this were considered a transgender or intersex story." Ultimately, of course, what mattered was how the pair was viewed by Malawi authorities, and that was unambiguously as a gay couple. All of the international pressure brought to bear on this case might have freed them from jail, but it did not bring actual, lasting rights -- be they for gay, lesbian, bisexual or trans people.