Sharron Angle is scared of fluoride 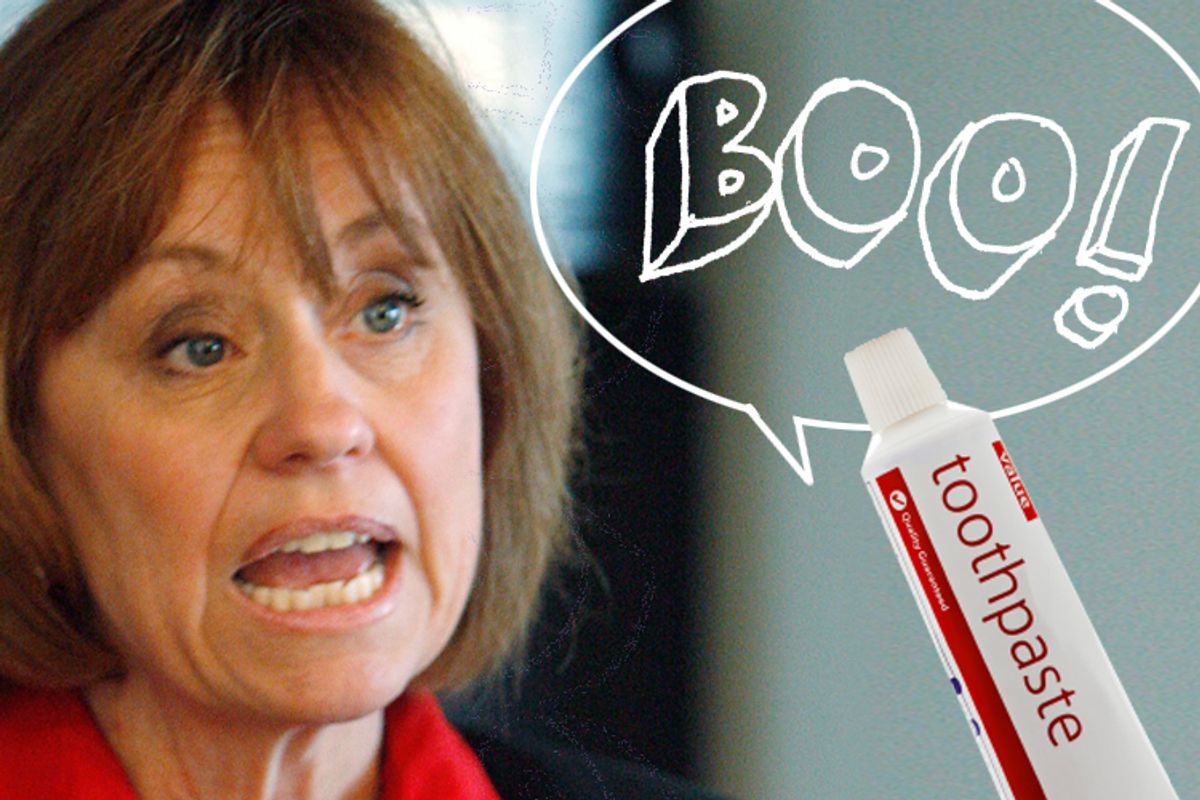 Thanks to Sharron Angle's win in Nevada, we have months of hilarious opposition research to look forward to. While her more mainstream opponent, Sue Lowden, was merely a terrible campaigner and kind of dumb, Angle is a Real Conservative who believes in things like abolishing Social Security.

There is growing proof that she is a genuine nut, and not just a run-of-the-mill hardcore ideologue. She has already been hammered for her weird support for the Church of Scientology-run "Criminon" drug treatment program -- which she supported not because she's actually a Scientologist (as far as I know), but merely because she was convinced of the efficacy of the completely unscientific saunas and vitamins-based program L. Ron Hubbard dreamed up one night.

Now it's been revealed (by, I am guessing, a simple Lexis-Nexis search) that Angle is a staunch opponent of the fluoridation of our water supply.

The Nevada state Assembly voted 26-16 to fluoridate the water of two Nevada counties. Angle voted against the bill. Not because of something defensible, like fluoridation being a waste of taxpayer money, but because she believed conspiracy theories about fluoridation.

[Bill proponent Chris Giunchigliani] attributed the reluctance of Angle and others to back the bill to its potential financial effect on Washoe County. ....

But Angle said she simply does not like fluoride.

'The fluoride solutions used in fluoridation must not contain any quantity of lead, arsenic, mercury, or any other substance that may be considered hazardous to human health,' she said. During hearings, Angle said witnesses testified most states use an industrial fluoride that contains such substances.

Opposition to fluoridation based on the supposed presence of toxins is basically a red flag that you're dealing with an unreconstructed classic paranoid right-winger of a very old vintage. (Most American drinking water has been fluoridated since the 1950s and very few of us have suffered adverse effects.)

So! Who will be the first to ask Sharron Angle, on the record, whether vaccines cause autism? Because that ought to be a fun couple days of cable news fodder.