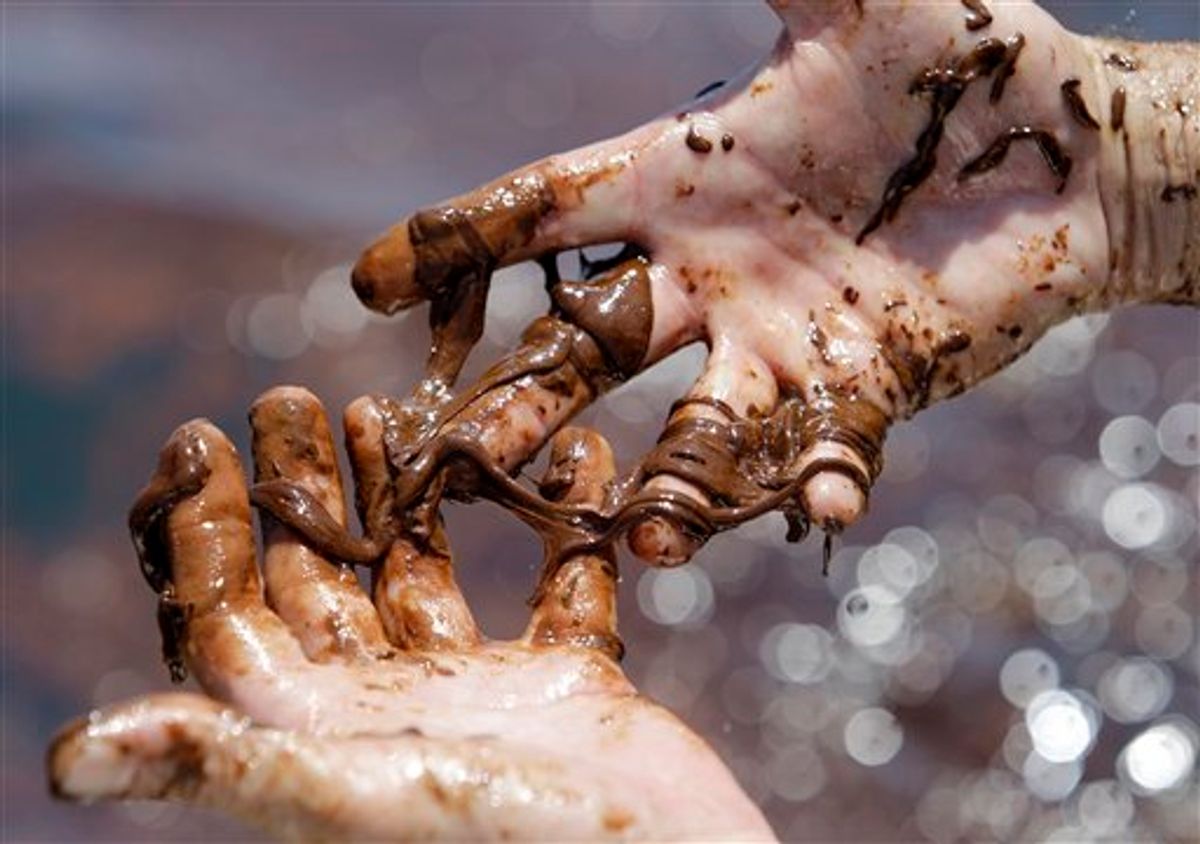 Professor Peter Lutz is listed in BP's 2009 response plan for a Gulf of Mexico oil spill as a national wildlife expert. He died in 2005.

Under the heading "sensitive biological resources," the plan lists marine mammals including walruses, sea otters, sea lions and seals. None lives anywhere near the Gulf.

The names and phone numbers of several Texas A&M University marine life specialists are wrong. So are the numbers for marine mammal stranding network offices in Louisiana and Florida, which are no longer in service.

BP PLC's 582-page regional spill plan for the Gulf, and its 52-page, site-specific plan for the Deepwater Horizon rig are riddled with omissions and glaring errors, according to an Associated Press analysis that details how BP officials have pretty much been making it up as they go along. The lengthy plans approved by the federal government last year before BP drilled its ill-fated well vastly understate the dangers posed by an uncontrolled leak and vastly overstate the company's preparedness to deal with one.

"BP Exploration and Production Inc. has the capability to respond, to the maximum extent practicable, to a worst case discharge, or a substantial threat of such a discharge, resulting from the activities proposed in our Exploration Plan," the oil giant stated in its Deepwater Horizon plan.

In the spill scenarios detailed in the documents, fish, marine mammals and birds escape serious harm; beaches remain pristine; water quality is only a temporary problem. And those are the projections for a leak about 10 times worse than what has been calculated for the ongoing disaster.

Billy Nungesser, president of Plaquemines Parish, La., says there are "3,000 acres (of wetlands) where life as we know it is dead, and we continue to lose precious marshland every day."

There are other wildly false assumptions. BP's proposed method to calculate spill volume based on the darkness of the oil sheen is way off. The internationally accepted formula would produce estimates 100 times higher.

The Gulf's loop current, which is projected to help eventually send oil hundreds of miles around Florida's southern tip and up the Atlantic coast, isn't mentioned in either plan.

The website listed for Marine Spill Response Corp. -- one of two firms that BP relies on for equipment to clean a spill -- links to a defunct Japanese-language page.

In early May, at least 80 Louisiana state prisoners were trained to clean birds by listening to a presentation and watching a video. It was a work force never envisioned in the plans, which contain no detailed references to how birds will be cleansed of oil.

And while BP officials and the federal government have insisted that they have attacked the problem as if it were a much larger spill, that isn't apparent from the constantly evolving nature of the response.

This week, after BP reported the seemingly good news that a containment cap installed on the wellhead was funneling some of the gushing crude to a tanker on the surface, BP introduced a whole new new set of plans mostly aimed at capturing more oil.

The latest incarnation calls for building a larger cap, using a special incinerator to burn off some of the recaptured oil and bringing in a floating platform to process the oil being sucked away from the gushing well.

In other words, the on-the-fly planning continues.

Some examples of how BP's plans have fallen short:

-- Beaches where oil washed up within weeks of a spill were supposed to be safe from contamination because BP promised it could marshal more than enough boats to scoop up all the oil before any deepwater spill could reach shore -- a claim that in retrospect seems absurd.

"The vessels in question maintain the necessary spill containment and recovery equipment to respond effectively," one of the documents says.

BP asserts that the combined response could skim, suck up or otherwise remove 20 million gallons of oil each day from the water. But that is about how much has leaked in the past six weeks -- and the slick now covers about 3,300 square miles, according to Hans Graber, director of the University of Miami's satellite sensing facility. Only a small fraction of the spill has been successfully skimmed. Plus, an undetermined portion of the spill has sunk to the bottom of the Gulf or is suspended somewhere in between.

The plan uses computer modeling to project a 21 percent chance of oil reaching the Louisiana coast within a month of a spill. In reality, an oily sheen reached the Mississippi River delta just nine days after the April 20 explosion. Heavy globs soon followed. Other locales where oil washed up within weeks of the explosion were characterized in BP's regional plan as safely out of the way of any oil danger.

While the exact toll on the Gulf's wildlife may never be known, the effects clearly have been devastating.

More than 400 oiled birds have been treated, while dozens have been found dead and covered in crude, mainly in Louisiana but also in Mississippi, Alabama and Florida. On remote islands teeming with birds, a visible patina of oil taints pelicans, gulls, terns and herons, as captured in AP photos that depict one of the more gut-wrenching aspects of the spill's impact. Such scenes are no longer unusual; the response plans anticipate nothing on this scale.

In Louisiana's Barataria Bay, a dead sea turtle caked in reddish-brown oil lay splayed out with dragonflies buzzing by. More than 200 lifeless turtles and several dolphins also have washed ashore. So have countless fish.

There weren't supposed to be any coastline problems because the site was far offshore. "Due to the distance to shore (48 miles) and the response capabilities that would be implemented, no significant adverse impacts are expected," the site plan says.

But that distance has failed to protect precious resources. And last week, a group of environmental research center scientists released a computer model that suggested oil could ride ocean currents around Florida and up to North Carolina by summer.

-- Perhaps the starkest example of BP's planning failures: The company has insisted that the size of the leak doesn't matter because it has been reacting to a worst-case scenario all along.

Yet each step of the way, as the estimated size of the daily leak has grown from 42,000 gallons to 210,000 gallons to perhaps 1.8 million gallons, BP has been forced to scramble -- to create potential solutions on the fly, to add more boats, more boom, more skimmers, more workers. And containment domes, top kills, top hats.

While a disaster as devastating as a major oil spill will create some problems that can't be solved in advance, or even foreseen, BP's plans do not anticipate even the most obvious issues, and use mountains of words to dismiss problems that have proven overwhelming.

In responses to lengthy lists of questions from AP, officials for BP and the Interior Department, which oversees oil rig regulator Minerals Management Service, appear to concede there were problems with the two oil spill response plans.

"Many of the questions you raise are exactly those questions that will be examined and answered by the presidential commission as well as other investigations into BP's oil spill," said Kendra Barkoff, spokeswoman for Interior Secretary Ken Salazar. She added that Salazar has undertaken transformational reforms of MMS.

Said BP spokesman Daren Beaudo from Robert, La.: "We expect that a complete review of the regional response plans and planning process will take place as part of the overall incident investigation so that we can determine what worked well and what needs improvement. Thus far we have implemented the largest spill response in history and many, many elements of it have worked well. However, we are greatly disappointed that oil has made landfall and impacted shorelines and marshes. The situation we are dealing with is clearly complex, unprecedented and will offer us much to learn from."

A key failure of the plan's cleanup provisions was the scarcity of boom -- floating lines of plastic or absorbent material placed around sensitive areas to deflect oil.

From the start, local officials all along the Gulf Coast have complained about a lack of supplies, particularly the heavier, so-called ocean boom. But even BP says in its regional plan that boom isn't effective in seas more than three to four feet; waves in the Gulf are often bigger. And even in calmer waters, oil has swamped vital wildlife breeding grounds in places supposedly sequestered by multiple layers of boom.

The BP plans speak of thorough resources for all; there's no talk of a need to share. Still, Alabama Gov. Bob Riley said his shores were left vulnerable by Coast Guard decisions to shift boom to Louisiana when the oil threatened landfall there.

Meanwhile, in Louisiana's Plaquemines Parish, Nungesser and others have complained that miles of the boom now in the water were not properly anchored. AP reporters saw evidence he was right -- some lines of boom were so broken up they hardly impeded the slick's push to shore.

Some out-of-state contractors who didn't know local waters placed boom where tides and currents made sure it didn't work properly. And yet disorganization has dogged efforts to use local boats. In Venice, La., near where the Mississippi River empties into the Gulf, a large group of charter captains have been known to spend their days sitting around at the marina, earning $2,000 a day without ever attacking the oil.

But perhaps the most glaring error in BP's plans involves Lutz, the professor, one of several dozen experts recommended as resources to be contacted in the event of a spill.

Lutz is listed as a go-to wildlife specialist at the University of Miami. But Lutz, an eminent sea turtle expert, left Miami almost 20 years ago to chair the marine biology department at Florida Atlantic University in Boca Raton. He died four years before the plan was published.