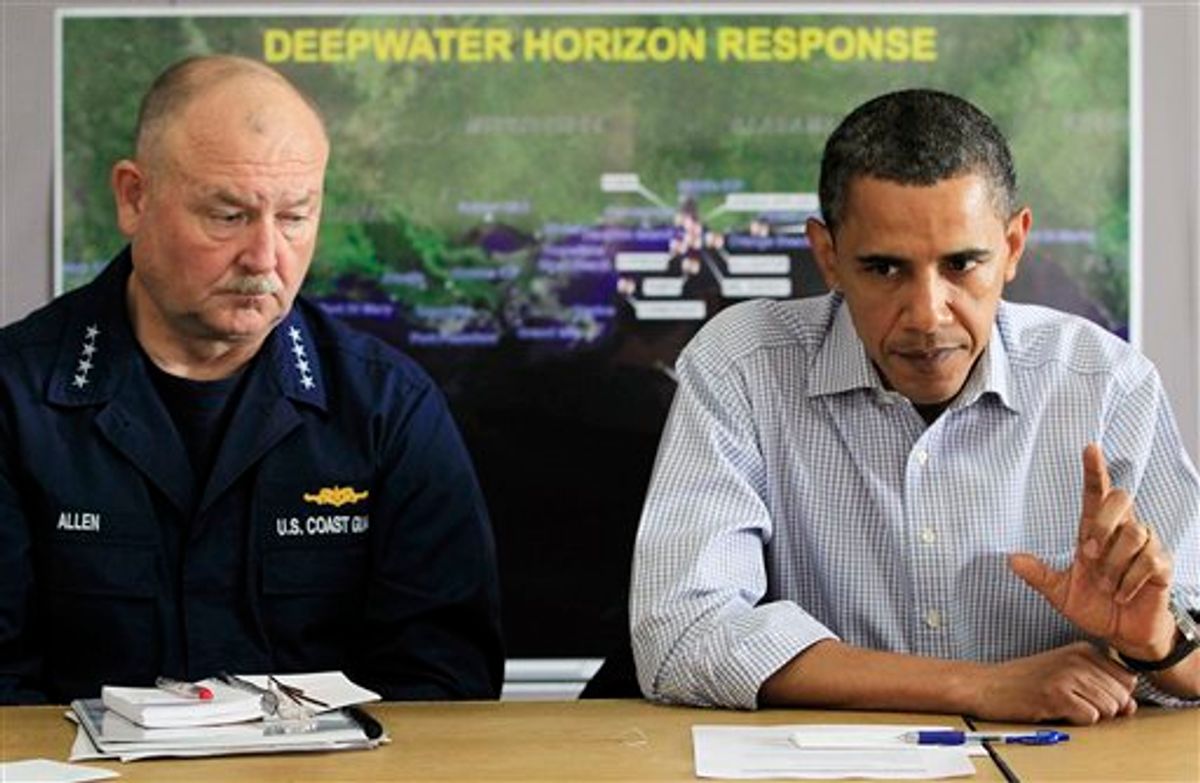 FILE - In this June 4, 2010, file photo, President Barack Obama, accompanied by by National Incident Commander Adm. Thad Allen, makes a statement after being briefed on the BP oil spill relief efforts in the Gulf Coast region at Louis Armstrong International New Orleans Airport in Kenner, La. "I take responsibility. It is my job to make sure that everything is done to shut this down," Obama said. (AP Photo/Charles Dharapak, File) (AP)
--

Coast Guard Adm. Thad Allen has written to BP CEO Tony Hayward demanding "more detail and openness" about how the company is handling mounting damage claims in the wake of the Gulf Coast oil spill.

Allen reminded Hayward in the letter dated Tuesday that the company "is accountable to the American public for the economic loss caused by the oil spill" and said he recognized Hayward has "accepted responsibility" for it.

At the same time, the man that President Barack Obama named as national incident commander in the wake of the April 20 oil rig explosion and fire told Hayward that BP is failing to provide "information we need to meet our responsibilities to our citizens."

Allen had said earlier this week at a news conference that he felt BP was struggling to efficiently process relief claims from individuals and businesses in the stricken area, attributing that to the company's lack of experience in the area.

In the letter made public Wednesday, Allen said that "the NIC and our state counterparts have made several requests for additional information which we have not received."

He noted that officials had asked the company for access to its claims database, "with personally identifiable information removed."

"Access to this level of detail is critical to informing the public as to how BP is meeting its obligations as a responsible corporation," Allen said. "I expect a response from BP on this critical issue as soon as possible."

Allen noted a meeting scheduled to take place with BP executives later Wednesday, at which the issue of claims processing was to be discussed.

"We need complete, ongoing transparency into BP's claims process including detailed information on how claims are being evaluated, how payment amounts are being calculated and how quickly claims are being processed," Allen told Hayward in the letter.