Rescue launched for California girl on solo sail around the world 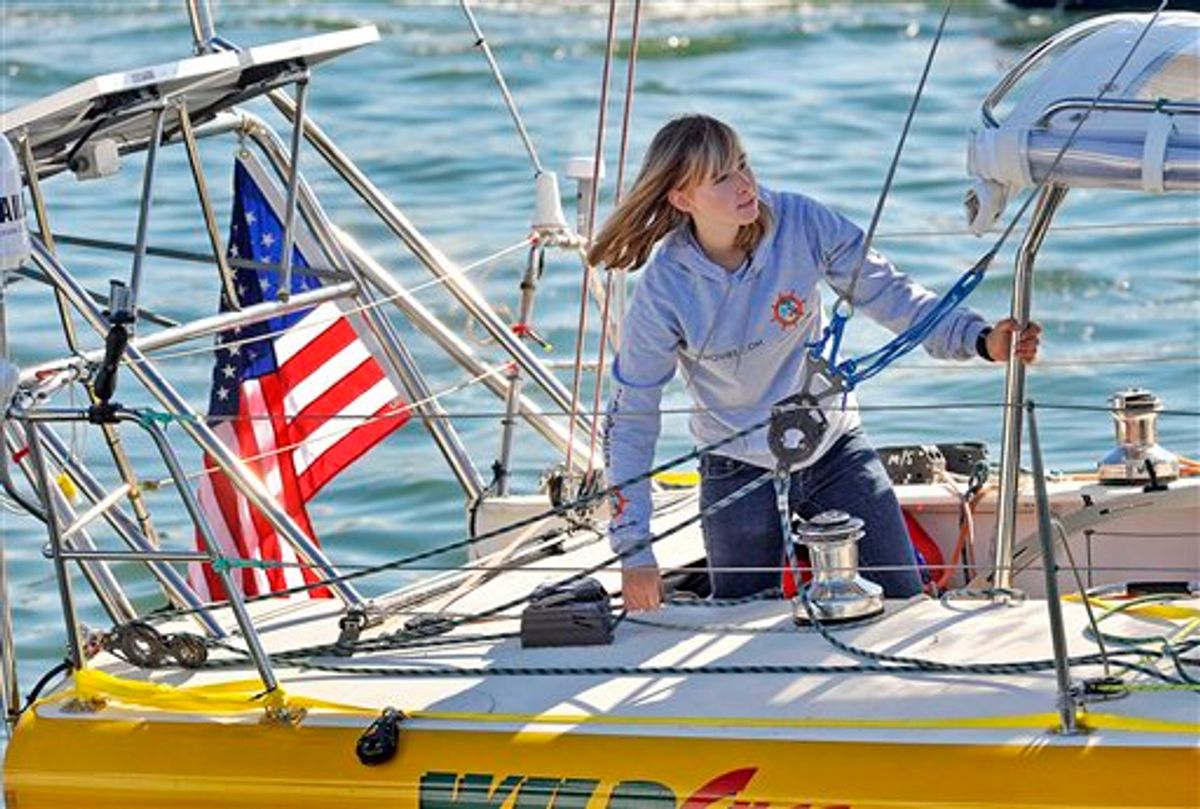 FILE - In this Saturday, Jan 23, 2010 picture, Abby Sunderland, 16, looks out from her sailboat, Wild Eyes, as she leaves for her world record attempting journey at the Del Rey Yacht Club in Marina del Rey, Calif. Rescuers searched Thursday, June 10, 2010 for her somewhere between Africa and Australia. He says emergency beacons were activated overnight and there has been a loss of communication. She was feared in trouble in the southern Indian Ocean. (AP Photo/Richard Hartog) (AP)
--

A 16-year-old Southern California girl attempting a solo sail around the world was feared in trouble Thursday thousands of miles from land in the frigid, heaving southern Indian Ocean after her emergency beacons began signaling and communication was lost.

An international effort to rescue young Abby Sunderland began, but the vast distances meant long hours of waiting for her family and support team, which expressed confidence that she was alive because the beacons were deliberately turned on rather than set off automatically.

"She's got all the skills she needs to take care of what she has to take care of, she has all the equipment as well," said brother Zac, himself a veteran of a solo sail around the world at age 17.

Australian Maritime Safety Authority spokeswoman Carly Lusk said three vessels were sent from the French territory of Reunion Island and an aircraft was to depart from Perth on a four-hour flight to Abby's location more than 2,000 miles from both Africa and Australia.

It was not clear when the vessels left, but it would take a day for the nearest ship to reach the area. Reunion Island is off Madagascar, the very large island along the east coast of Africa.

Support team member Jeff Casher said the two emergency beacons were continuing to broadcast and GPS location data showed they were together and drifting at 1 mph. He believed the beacons were on Abby's boat but said they could be with her on a raft.

Casher offered several scenarios: The boat may have flipped over and Abby could still be inside; the boat's mast may have been damaged; or she was injured and could not pilot the boat. He said that if the boat flipped, the hull would prevent her from calling from her satellite phone.

Conditions can quickly become perilous for any sailor exposed to the elements in that part of the world.

"We've got to get a plane out there quick," said family spokesman Christian Pinkston, adding that the teen's family in Thousand Oaks was asking for prayers for her safety.

Her brother said Abby was prepared and mentally tough. "I really wish I could see her and hope she gets through this one," he told reporters outside the family home.

Abby last communicated with her family at 4 a.m. PDT Thursday and reported 30-foot swells but was not in distress, Pinkston said.

An hour later the family was notified that her emergency beacons had been activated, and there was no further communication.

Her brother said the boat was most likely not completely submerged because another beacon would be triggered at a depth of 15 feet.

"It's hard to determine if she's rolled over, swamped, or washed overboard. She has to have a dry suit on to have any chance," he said. "To be capsized in the middle of the ocean with waves crashing relentlessly down, not just for hours, but days, I can't tell you how difficult those conditions are."

A lifelong sailor whose father is a shipwright and has a yacht management company, Abby set sail from Los Angeles County's Marina del Rey in her 40-foot boat, Wild Eyes, on Jan. 23 in an attempt to become the youngest person to sail around the world alone without stopping. Her brother briefly held the record in 2009.

Before Abby's voyage began, her brother described her as having more skill and experience than most sailors in their 20s and 30s. Her father said she had more solo sailing experience than Zac did before he started out.

"He totally thinks that I'm ready to do it, so that does help," she said at the time.

Abby soon ran into equipment problems and had to stop for repairs. She gave up the goal of setting the record in April, but continued on.

On May 15, Australian 16-year-old Jessica Watson claimed the record after completing a 23,000-mile circumnavigation in 210 days.

Abby left Cape Town, South Africa, on May 21 and on Monday reached the halfway point of her voyage.

On Wednesday, she wrote in her log that it had been a rough few days with huge seas that had her boat "rolling around like crazy."

"I've been in some rough weather for awhile with winds steady at 40-45 knots with higher gusts," she wrote. "With that front passing, the conditions were lighter today. It was a nice day today with some lighter winds which gave me a chance to patch everything up. Wild Eyes was great through everything but after a day with over 50 knots at times, I had quite a bit of work to do."

Information on her website said that as of June 8 she had completed a 2,100-mile leg from South Africa to north of the Kerguelen Islands, taking a route to avoid an ice hazard area. Ahead of her lay more than 2,100 miles of ocean on a 10- to 16-day leg to a point south of Cape Leeuwin on the southwest tip of Australia.

Charlie Nobles, executive director of the American Sailing Association, said the best-case scenario would be that she had had a severe knockdown or roll by a strong wave that caused her communication equipment to go out, or the boat sustained structural damage that was preventing her from sailing.

The worst case would be if she was in the water or in her life raft.

"It's an extreme set of conditions with the winds, the force of the waves," he said.

A person lost at sea can typically survive 12 days on average without fresh water and a month without food, according to survival experts.

If the boat capsized, survival will depend on factors including water temperature, sea conditions, safety gear and whether there was something to hold on to.

Last year a Netherlands court concerned about safety blocked a 13-year-old girl's plan to sail around the world, sparking debate on the role of authorities and parents when children want to undertake risky adventures.

Such attempts have resulted in success and tragedy.