She and her supporters believe we live in epic, apocalyptic times. Can they settle for boring, regular democracy? 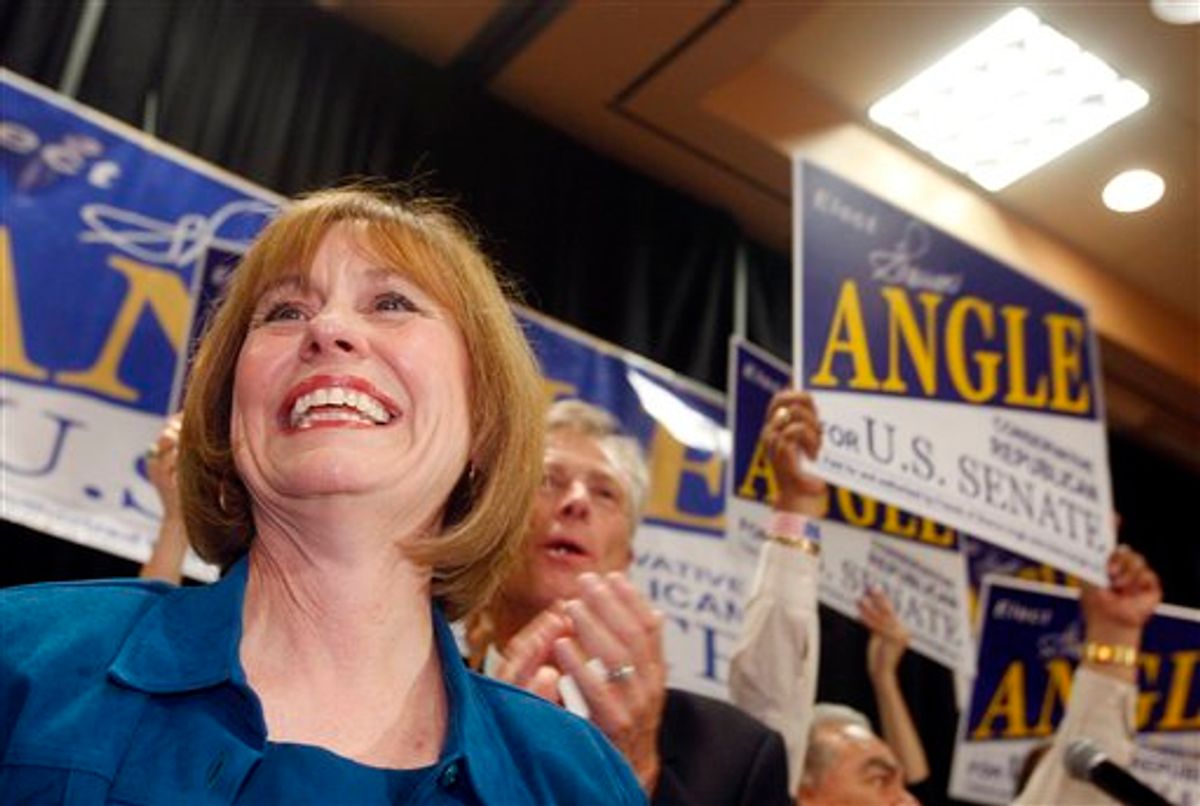 You have to say this for the Tea Party movement: it's giving some color and flavor to an  depressing recession-era election year. Glenn Beck's fantasy world doesn’t seem like a great place to live, but it's certainly making for an interesting vacation -- so long as we get to go home.

The question, though, is what happens when reality punctures the bubble, or if that's even possible. In Nevada, the Republican Party has just nominated a former state legislator named Sharron Angle, one of the Tea Party's favorite daughters, and, it seems, a full-time resident of the paranoid alternate universe.

Angle, it turns out, is some kind of member, or at least sympathizer with, a group called the Oath Keepers, an organization of current and former members of the armed forces, police and firefighters. (So it's not clear exactly how she even qualifies, since she's none of those things, but that's beside the point.) The Oath Keepers are organized around a list of ten orders that they have sworn never to carry out. They won't, for example, conduct warrantless searches, enforce martial law, or put Americans into concentration camps.

It’s not that surprising a code of conduct or even, in itself, entirely indefensible. (Though you do wonder where these guys were, say, five or six years ago.) Of course, it's got its warty spots as well: there's an oath not to disarm the American people, and another not to assist in the subjugation of an American state asserting its sovereignty. You kind of get the sense that Abraham Lincoln and the authors of the Brady Bill are traitors, by this standard.

The central claim of the Oath Keepers is that they are the last line of defense for the Constitution and our national values. This is what Angle says too. She recently noted that ammunition appears to be selling very fast. "That tells me the nation is arming. What are they arming for if it isn't that they are so distrustful of their government? They're afraid they'll have to fight for their liberty in more Second Amendment kinds of ways? If we don't win at the ballot box, what will be the next step?"

That's the perfect quote, in a way. It follows to its conclusion the logic of a group whose members fancy themselves the defenders of American democracy, but are busy at the task of discrediting it as quickly as they can. If we don't win, Angle says, we may take up arms. Is anyone else nervous about the idea of veterans serving as the armed wing of a far-right political movement, and imagining themselves as the keepers of the national flame? It's not exactly a glorious historical tradition.

But now these guys have a toehold in the GOP, between official sympathizers like Angle and ideological fellow travelers like Rand Paul, and some right-wing representatives -- Michele Bachmann, Paul Broun and Phil Gingrey. The Oath Keepers and their sympathizers desperately want to think that the constitutional order has broken down, and some titanic clash is on the way. So what's going to happen when the GOP regains some power this November?

It's far from certain that either Angle or Paul will win. But it's not at all unlikely, for one or both. And if Sharron Angle is a U.S. senator a year from now, she'll find herself part of a national Republican Party that's able to block just about any legislative initiative it wants. (Hell, it can now, just about.)

Come next year, the GOP will have a piece of the action that, from the outside, Angle and the Oath Keepers view as the machinations of communist traitors. When she has to come out of her world and into ours, will Angle continue to play make believe? Certainly, being a member of Congress hasn't kept Bachmann back from the brink.

And if one of their own is in office and the GOP has the power to obstruct the president even more, will that be enough to calm the Oath Keepers? This is speculation, but it's easy to imagine Angle getting to Washington and announcing, "It's worse than we thought."

The question here is whether anything will ultimately quiet the Tea Party. Assuming that we are not headed for a bloody, apocalyptic showdown -- you know, just for the sake of argument -- then do these guys go away after they win a few? Or after they lose? Neither prospect seems that likely. That is, having fantasized a vision of the collapse of the constitutional order, the Tea Party, the Oath Keepers and Sharron Angle may not want to settle for anything less. And if they're ultimately too much of a silly sideshow to fulfill their own prophecy and bring about the imaginary disaster that they see coming, they're certainly not doing wonders for our politics in the meantime.