The irony of tightening border security

As a Sergio Hernandez is killed at Rio Grande, shouldn't we be thinking hard about sending more troops there? 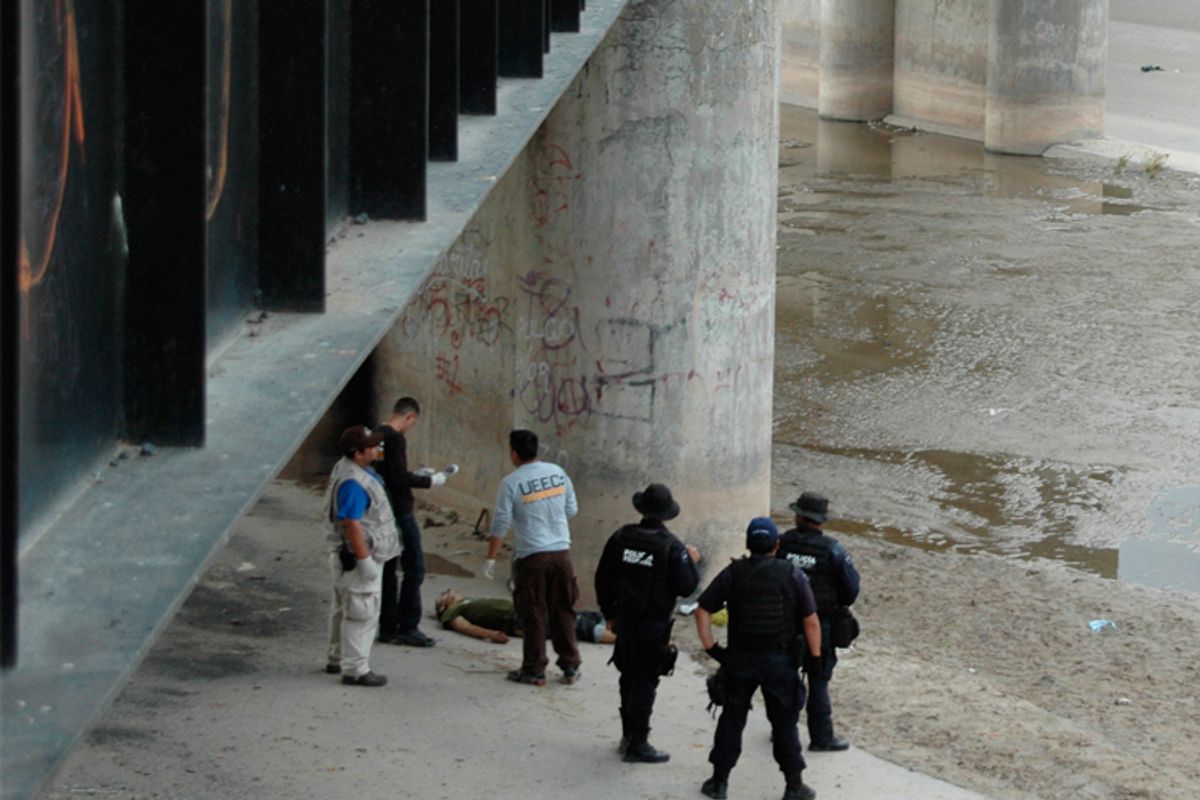 President Obama recently decided to deploy 1,200 troops to the U.S.-Mexican border, and Republicans in Congress are pushing to dispatch thousands more than that. But this week's news that a 15-year-old was shot and killed by Border Patrol agents -- on top of a similar shooting death two weeks ago -- suggests the possibility that increased security may fuel more violence, instead of pacifying the border.

On Monday, Sergio Adrian Hernandez Huereca and his friends were reportedly playing in a dry section of the Rio Grande, in Mexico, and throwing rocks at border guards. According to an eyewitness, an agent arrived on a bike and started shooting at the teenagers. Hernández hid behind a wall, and when he looked out, he was shot. A U.S official quoted by the Associated Press said the agent didn’t enter Mexico, and according to the FBI, border security was responding to a group of suspected illegal immigrants trying to cross. Late Tuesday night, a banner appeared on the bridge under which Hernández was shot. It read: "U.S. Border Patrol we worry about the violence in Mex and murders and now you. Viva Mexico!"

An Arizona newspaper quoted Sen. John McCain citing drug cartels and the violence they spur as one of the main reasons he and fellow Arizona Sen. Jon Kyl’s proposal to send 6,000 more troops to the border. It's easy to see the popular appeal of this call. As the drug war escalates in Mexico, the national mood naturally gravitates toward slamming the door on that mess down south. That's why even though the "congressional appetite" was not ripe to discuss a reform, Republicans seem to be repeating "border first" like a broken record.

Seth Hoy writes in the blog Immigration Impact that Obama's May deployment of troops to the border is hopefully a bargaining chip, but it may also be an act of accommodation:

While the President’s intentions to address the real sources of violence and crime along the border—that is, drug cartels and gun traffickers, not immigrants—is duly noted, the President is being perceived as piling enforcement on enforcement and pandering to Republicans with no real forward movement on reform.

And it may also be a more populist move than a reasonable one.

David Shirk, director of the Trans-Border Institute at the University of San Diego, says that though Border Patrol have increased in number over the last decade, drugs and guns are still being smuggled across the border:

The border patrol has doubled in size to 20,000 agents—up 15 percent from previous year and more than double a decade ago. There are also more than 3,000 Immigrations and Customs Enforcement agents, 300 National Guard troops (with 1,200 more on their way), and a significant surge in the number of Alcohol, Tobacco, and Firearms personnel. However, border security advocates say that this is still not enough.

Indeed, the border-centric approach has encouraged drug trafficking organizations to evolve from relatively small scale, low-level operations in the 1980s into the highly sophisticated, heavily-armed criminal organizations that are today seriously undermining the Mexican state. The flow of drugs and immigrants continued practically unabated, despite these very costly investments in border security.

"Because the border is more difficult to cross, more money is going to smugglers,” said Judith Gans, researcher at the University of Arizona, in a phone interview. "People have to start paying more sophisticated human smugglers and these are often drug smugglers, too."

Arizona’s anti-immigration law was ignited by the killing of Cochise County rancher Robert Krentz by someone who authorities speculated may have been a drug smuggler or illegal immigrant. The law pushed immigration debate to the forefront amid panicked calls for a border-first strategy. And that panic is still be leading the way since April. Maybe the death of  a child on the border will spark a different discussion.