Jacqueline Feilich earned a cult following with her gender-bending. But is the world ready for a lady Elvis? 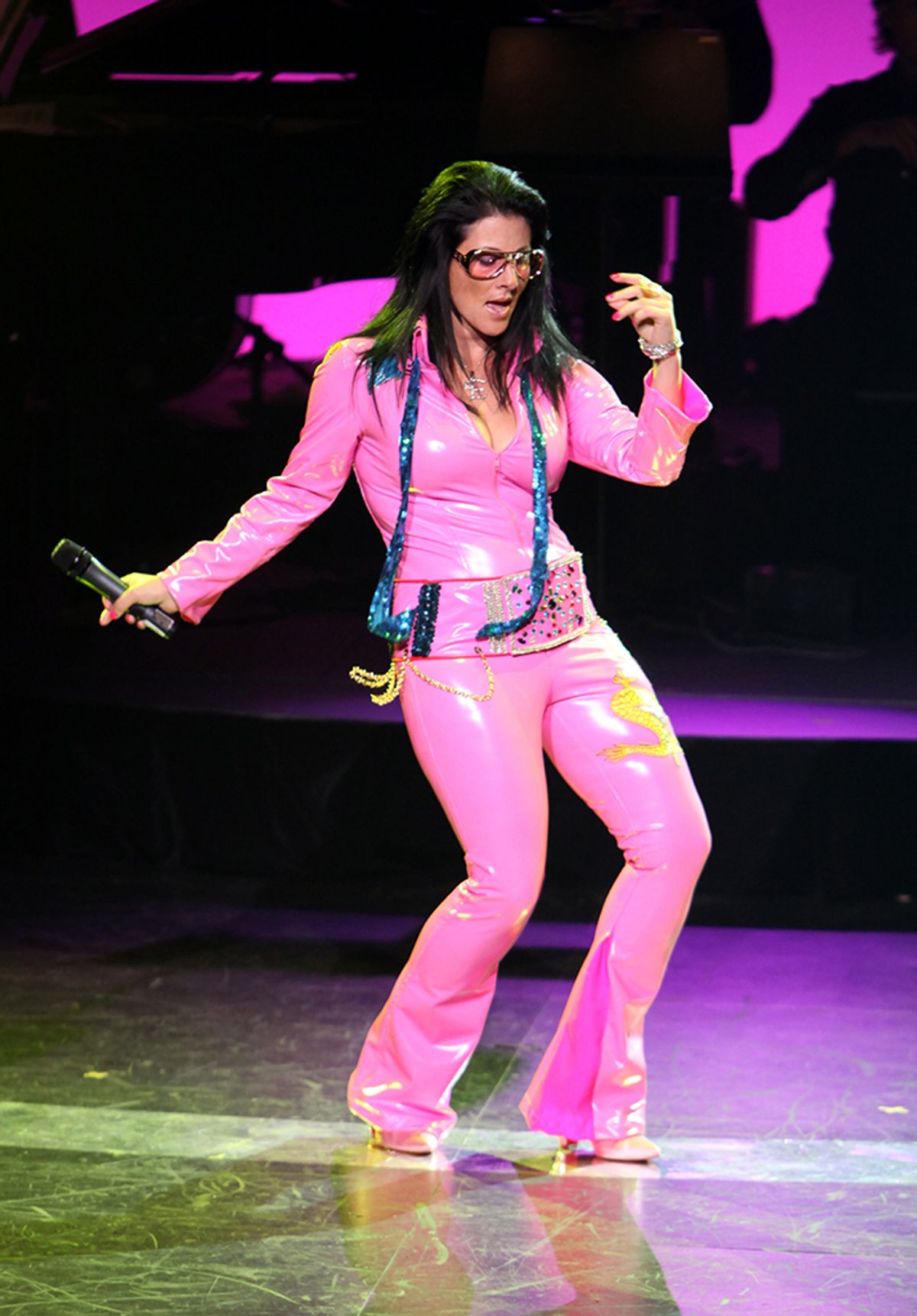 It's creeping toward the official beginning of summer, which means barbecue, grass-stained pants and, of course, Elvis. This August marks the 33rd anniversary of the King's death, and Elvis tribute artists -- most bristle at the word "impersonator" -- are gearing up around the world for the granddaddy of Elvis events: King week in Memphis, where pelvis-swiveling, jumpsuited wannabes all compete for the crown of the Ultimate Elvis Tribute Artist.  Elvis look-alikes come in all ages, though they tend to be straight, white and male.  But not always, at least in the last few years, thanks to Jacqueline Feilich.  A Sydney gemologist and suburban mother turned full-time Elvis tribute artist, Feilich has been shaking up the Elvis circuit with her skin-tight pink jumpsuit and decidedly female take on the King's music.  Feilich is one of a very few female Elvises worldwide, and perhaps the only one who takes it seriously: Her acts aren't campy, nor do they go for a knowing, ironic vibe like Elvis Herselvis.

Salon talked to Feilich before she headed to the qualifying round of the Ultimate Elvis Tribute contest in Coolangatta, Australia, to ask about lesbians and the King, hate mail, and her daughter, an upcoming Michael Jackson tribute artist.

How did you get started as a tribute artist?

I was 3 years old when I first got interested in Elvis. My father used to listen to Nat King Cole and Perry Como, and he had one Elvis eight-track. Later on I was introduced to the movies and saw what he looked like and became obsessed. I had many different garage bands that I tried to bribe, but nobody was interested in playing Elvis. Plus, they were unreliable about showing up to gigs, so one day I decided to get a boombox and rent a costume and just do it. My first professional gig was in Las Vegas in 2006. My bag with my costume in it got lost at the airport. I performed in jeans and a T-shirt in amongst all the male jumpsuited contestants. After the contest a lady came up to me and said, "Darlin', you're real good but you need a costume."

What's it like to be one of the only women performing in the circuit?

Some tribute artists have a problem with it, but generally they really love a female spin on the King. I've never come across another professional female ETA on the circuit, though some have contacted me through my website. The truth is that I can't see there being a female tribute artist winner of any tribute contest for a long time. I don't go in these things to win, and when I tell people that they sort of nod and say, well that's right, you probably won't. The last contest I did was the Elvis world cup in Wales; after I finished there I got some hate mail. One guy sent me an e-mail that said, "Who do you think you are? Elvis was a man, not a woman. You have deprived one of the ETAs who deserved to be in this position of a spot." I'd never experienced that before. But, you know, if I'm getting a letter like that I must be good. If I wasn't getting hate mail then I'd think I need to step up my game.

You have an enormous following among Australia's lesbian community.

When I started, I had a manager who was a lesbian. And she kept saying to me, "You wait, the girls are going to love you." And I never thought about it from that perspective. It's an honor, and I love it. People tell me that I'm a cross between Joan Jett and Suzie Quattro and Elvis, and, you know, I'll take it. [Laughs] There's such a huge gay community here. But, you know, I do understand it. Elvis very much crossed genders, thanks to his talent. I find that both genders admire him equally as much.

Most female Elvis impersonators perform in drag, but in your act you make no pretenses toward being a man. Why did you decide to go in a different direction?

I never wanted there to be anything cheesy about my tribute. I wear the costumes but as a woman and I sing in my own voice. I think an impersonator is a copycat, but a tribute artist is someone who plays herself while paying homage to someone. Elvis himself was complimented by the few tribute artists who were around whilst he was alive; he always encouraged them to keep their own personality in the act. I'm trying to take his advice, and incorporate some of Elvis' classics with some really modern, musical twists to attract a whole new generation to the King.

Elvis is often thought of as an American icon. What is it like showing up at King Week as the representative from Australia?

I'm pretty sure that the first time I showed up as a female tribute artist dressed in a bright pink jumpsuit nobody knew what to make of me. They probably didn't think Aussies even knew who Elvis was since he never toured outside the U.S. I haven't found my nationality to be an obstacle so far because my being a female ETA is usually more of a contentious issue. I can say that I have definitely been welcomed into the Elvis community in the U.S.

You have two children. How do they feel about Elvis?

I think I've brainwashed them for long enough for them to actually say they love Elvis now, but there was a time when my son couldn't stand him. My daughter loves Michael Jackson. She is an upcoming female MJ tribute artist. She's not doing it outside our home yet because she's only 11. But I think it's just so sweet, and it's another thing you can cross gender with. It's easy for a woman to gender bend. I'll certainly encourage her when she wants to take it onstage.