A guided food tour with a dash of history, culture and hot teenagers making out (with a handy map!) 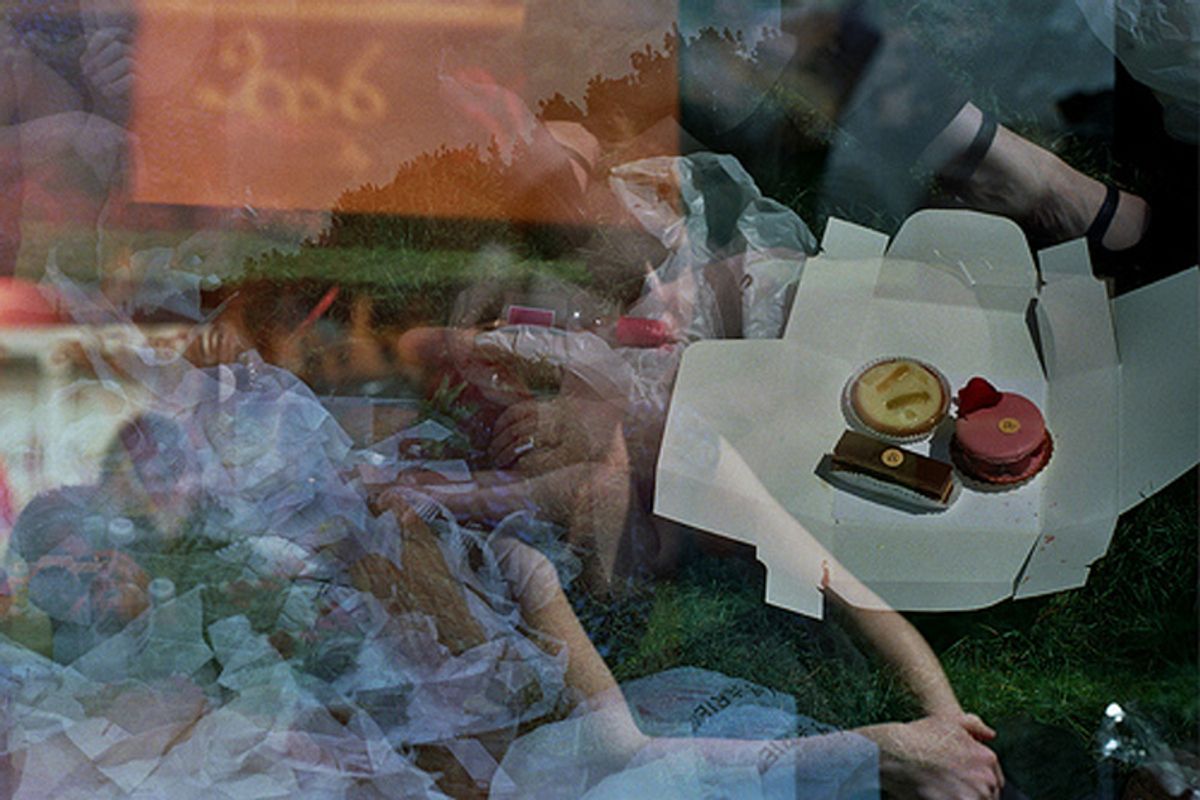 Vacation multitasking is one of the most sorrowful ideas imaginable. You're on vacation! Try to enjoy it! But if your time is short in Paris, (or even if it's not), why not see half the city and have lunch at the same time? Because this town is built for picnics, and here's a highly recommended trail of crumbs.

First of all, have a few friends with you, because you're going to need help eating all this stuff. Or a lover! It's going to be a romantic stroll. But you'll still need extra stomachs ... better to have a few lovers then. Hey, it's cool. It's France!

Start in the morning, of course, with bread, and for that, head to the original Eric Kayser on Rue Monge in the 5th arrondissement, in the shadow of Notre Dame. Eric Kayser is home of a deliriously good baguette -- several, in fact: the classic, with an extra-crisp crust and clean flavor, and the baguette Monge, with its thicker, richer crunch and the aroma of a slow rise, and well, OK, you can probably end up getting swept away with any number of other breads there. But choose wisely; we've got more bread coming later. (Note that there is an organic -- "biologique" -- Eric Kayser bakery a few doors down. The bread is not nearly as good there, in my opinion.) No, it's not too early for ice cream, and I wouldn't look askance if you decide to take a little detour right now to Berthillon. I mean, it's just a few blocks, a bridge, and a shoulder-to-shoulder line of tourists away, and the chocolate ice cream is so rich it's chewy, the caramel ice cream has the power of a hundred caramel candies, and if you happen to be there for wild strawberry (fraise des bois) season, a taste of that sorbet will make you realize that the only way to get closer to the fruit is by getting buck naked and rolling around in a strawberry patch. (Don't do that in the sorbet. People will disapprove.)

With or without ice cream coursing through your veins, now we're going to make the first of several pastry stops. MasMoudi is fascinating, a shop on the chic Boulevard Saint-Germain that looks like a fancy jeweler, selling instead gemlike Middle Eastern sweets in a room so intensely, gorgeously blue you'll feel like you're fever-dreaming on a raft in the Mediterranean. Skip the baklava and pay attention to the phenomenally meticulous quarter-size pistachio and pine nut confections, made with the crispest, lightest phyllo dough, rich nut bases, fragrant floral essences and stunningly arranged as if flower buds themselves.

Now it's time to go to church. Pierre Hermé is a demigod among pastry chefs, and a god among normal men. His pastries are part fashion (he releases them in seasonal "lines" of themed flavor combinations), part art, and all kick-ass. The Ispahan is a signature, an expression of raspberries, rose and litchi in the form of fresh berries, macarons and litchi cream, so gorgeous and subtle and wonderful, it seems almost a shame to pick it up and eat it like a hamburger, bits and pieces falling from your hands. Choose a few tarts and such from the case, but don't forget the little corner in the back of the shop featuring phenomenal croissants and other less-showy products. And really don't miss the canneles; shy and dumpy-looking amid all the gorgeousness, these brown little plugs are fantastic: Caramelized, pliant crunch giving way to a near-custard center. Oh wait, now it's time to go to church: Right outside of Pierre Hermé is Saint-Sulpice, a stunning building that would be the absolute pride of any other city, but in Paris is just another around-the-corner breathtaker. Ornate and grand but still intimate and human-scaled, a slow, quiet walk through Saint-Sulpice was for me a grounding moment, a meditative pause in a morning of earthy pleasures. This guy grows the craziest strawberries

Pierre Hermé is renowned for his macarons (and for good reason -- his passion fruit and chocolate version combines those flavors so seamlessly you think they're the same), but to my mind, the finest-textured macarons I had were from nearby, by the Japanese-French master Sadaharu Aoki. Delicately brittle with an airy, chewy center, his macarons beautifully essentialize and deliver their flavors. Most are traditionally French, but he also features a few unique Japanese fillings, including a crowd-pleasing black sesame and a warm, toasty genmaicha tea. And as a bonus, Aoki's macarons cost nearly half of Pierre Hermé's.

This may not mean much to most people, but for many years, Lionel Poilâne was the most famous bread baker in the world, and he lived the celebrity lifestyle to prove it. He had a private island, his own helicopter, mailed Robert De Niro daily loaves and made art with Salvador Dalí, including a famous bread birdcage from which the bird ate its way to freedom.

But before sourdough money allowed him to be a dandy, he was just a serious-as-hell baker, continuing in his father's footsteps of making naturally leavened, old-time country loaves in a Paris that was increasingly turning to industrial, lifeless bread. Lionel went even further, becoming a sort of national bread archivist, collecting and preserving traditional recipes and techniques from all over the country.

His miche loaves, with their chewy, meaty texture, were considered by many to be the best bread in the world, but of course, with fame and success come successors and detractors. Some say Poilâne's bread is no longer even the best in Paris, including my friend Brandon, who knows a thing or two about dough. But we had to go there anyway, if only to pay our respects (Poilâne died in a helicopter crash years ago), and upon tasting the miche again, Brandon took a considered pause. Finally, he said, "OK, well, with a little butter on it, I bet that bread will make me cry."

Now with all that bread and several rounds of dessert taken care of, let's get you set up with the other four food groups. (There are five food groups in France: Butter gets its own.) Strap a seat belt on your shopping cart and get ready for Le Grande Epicerie de Paris. You could literally spend hours here shopping for everything from Christine Ferber's epic jams to exotic teas to four or five different breeds of chickens. But here are some highlights: first, butter. Bordier butter. This is the King of Butters, so cultured and yellow it looks like a brick of cheese, with a firm texture and flavor so full it sticks around for days. The demi-sel is salted and magnificent, but I'm really into the "algues," with bits of seaweed mixed in. Seriously -- it gives a fascinating, fresh flavor of the sea.

Stroll through the produce section, and be on the lookout for little plastic boxes of lettuces, berries and other produce with a red label and cute photos of earnest-looking men, pictures of the farmers who grew that particular handful of berries or pile of greens. Everything we tried from those boxes was magic -- arugula like fresh pepper, strawberries as refreshing as a cold glass of water.

And then, of course, acquaint yourself with the counters of cured meats. There are literally dozens of hams, dried and fresh sausages, pâtes and terrines and all the rest of it, and the people behind the counter will not look at you funny if you ask for just a few paper-thin slices, which they then wrap and seal in a cool little hot-seaming machine. I really loved the smoked dry-cured ham from Alsace (jambon cru fumé Alsace), the jambon de Bayonne (France's answer to prosciutto), the dry sausage called rosette de Lyon, and the spreadable goose (rillettes d'oie).

This may be impolitic of me to say since we are in France, but France is also in Europe, which means that the incredible Spanish ham jamón iberico de bellota 1) is widely available, and 2) instead of costing as much as your house, it only costs as much as your car. But three paper-thin slices of the stuff will keep you smiling for hours, and isn't that worth a few bucks? (Grab a few knives and maybe forks here, too.)

OK, last stop, because as you may have noticed, we skipped the entirety of the cheese section. Why? Because just a few blocks away is the Crèmerie Quatrehomme, where it's nearly impossible to go wrong with any cheese. Owner Marie Quatrehomme was the first woman to win the super-prestigious Meilleurs Ouvriers de France, sort of a national medal of honor for craftspeople. Yes, she won a national medal of honor for running a cheese shop. I don't know what that means exactly (superb alphabetizing?), but I do know it means you can trust her. Go with an idea of what you like (goat cheese makes you want to die? Don't get goat cheese!), but an open mind. And here's a tip: anything with the words "au lait cru" (made from raw milk) is probably something you can't get back home. I am in love with long-aged Comte, with its Pac-Man wheels and salty nuttiness, and definitely give some serious thought to the soft cheeses, the Brie de Melun and such, whose creaminess and complexity have nothing to do with the wan versions sold shrink-wrapped in our supermarkets or found baked on wedding buffets. If they're soft and kinda bulgy, like they're melting in slow motion, eat them. Pay for them first, but eat them.

Now, with eight arms' worth of food, go up the street and around the Jardin Catherine Labouré, a little gem of a park and garden with plenty of plush grass, shade, children playing, country-style restrooms and, if you're (un?)lucky, hot young things making out. There, while Brandon cried over his bread and butter, Molly sat wild-eyed from her bite of Ispahan and Winnie sipped thoughtfully on a fruit juice, I gazed out over the lawn at a young couple.

"In health class they called that 'heavy petting,' I said, retraining my attention on the hams before me rather than the hams being caressed.

But a few bites later, I looked up again. "Whoa. And on wildlife documentaries I believe they call that 'presenting.'" And we spent our afternoon with no worries, no multitasking, just enjoying the sun overhead, the animal funk of meat and cheese, and love in the air. View Picnic in Paris in a larger map.