To win in November, Harry Reid must go after Angle now 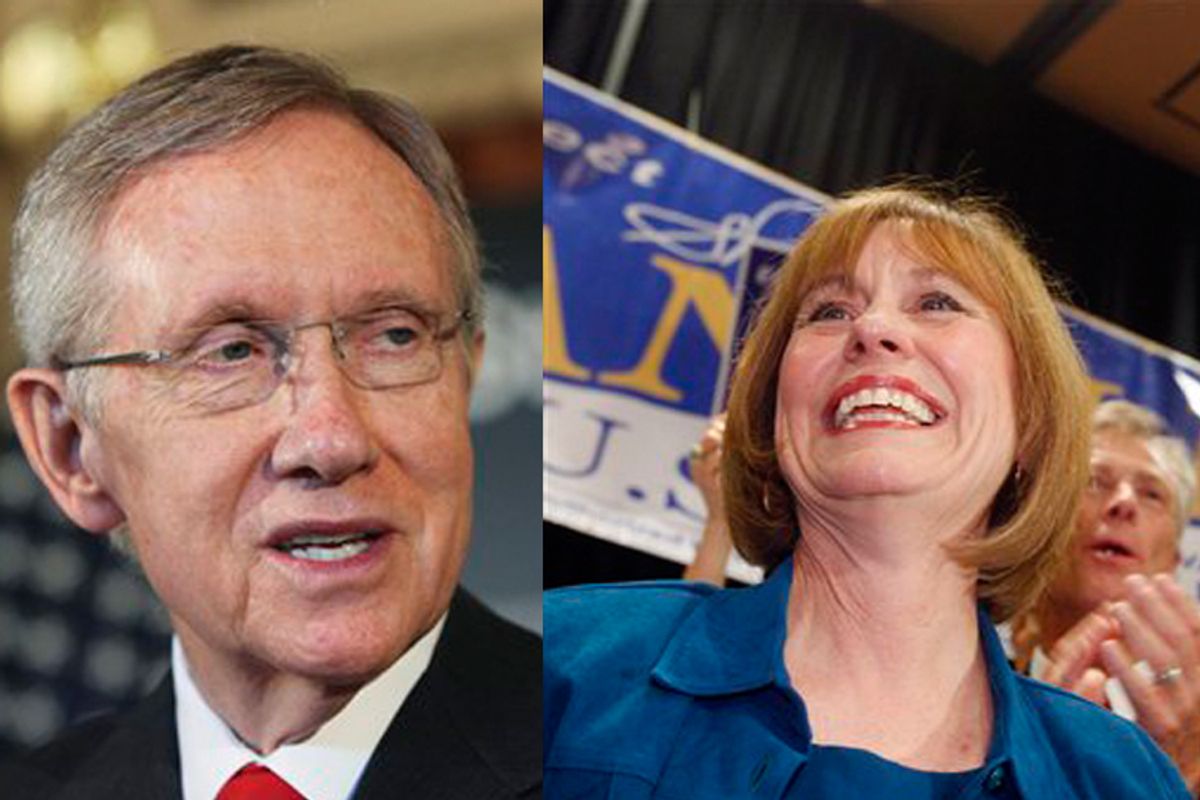 The next week may be the most important one in Sen. Harry Reid’s political life. If Reid and his campaign can duplicate the brilliant success they had in influencing the outcome of Nevada's GOP primary, the embattled majority leader might pull off a victory that seemed nearly impossible a month ago.

What he does in the coming weeks will go a long way toward determining if that happens.

In Tuesday's GOP primary, Republicans nominated Sharron Angle, a former state assemblywoman who can be fairly characterized as a fringe candidate with a history of electoral failure. Angle rose from the basement in polls to a commanding lead in the final weeks with grass-roots and financial backing from conservative groups and an epic collapse by the original front-runner, Sue Lowden.

But Angle’s rise was boosted significantly by the work of Reid, whose surrogates pledged to "vaporize" Lowden’s candidacy and then did just that, using television ads and free media to draw attention to her suggestion that Americans try to barter for their healthcare. This cost Lowden her credibility and made her vulnerable to Angle.

Reid’s campaign understood that Lowden, with a thin record, would have been a very difficult opponent to vanquish. Reid’s own electoral flaws this year are obvious: Nevada voters have grown tired of him (he was first elected to office in 1970), and his approval ratings are stuck well under 50 percent. His only chance at victory in the fall, it was clear early on, would come through burning the opposition to the ground.

With her "chickens for check-ups" blunder in April, Lowden gave Reid and his allies an opening, which they seized with a barrage of attacks from "independent" groups -- groups that Reid didn't officially control but that clearly had his best interests in mind. (Patriot Majority, for instance, an outside group that aired anti-Lowden ads, is run by an ex-Reid staffer.)

The effort paid off last night, as Republicans nominated Angle -- their least electable choice and a candidate whom Reid might actually be able to defeat.

An enthusiastic, almost gleeful extremist, Angle supports dismantling the Social Security system, abolishing the federal income tax, and shuttering the Departments of Education and Energy. She has spoken in support of alcohol prohibition and has even proposed prison reform ideas propagated by the Church of Scientology. And she's had trouble at the polls before. Yes, she won three terms in the Nevada Assembly -- where she was repeatedly voted the state’s worst legislator by the Las Vegas Review-Journal. But Angle has also lost two bids for higher office, both in primaries: for the U.S. House in 2006 and the state Senate in 2008.

In early general election polls, Reid remains tied with Angle and seemingly stuck at 40 percent. But he has around $10 million in the bank, while Angle emerges from her primary with virtually nothing. This means that while Angle reloads -- and rest assured, the National Republican Senatorial Committee, the Club for Growth, and an armada of Tea Party groups and GOP donors will pour money into the state on her behalf -- Reid can define her to the electorate.

Reid's imperative is crystal clear. The strategy that helped him "win" the Republican primary is the same one -- the only one -- that will win him the general: He must go up on the air immediately and trample Angle with ads highlighting her out-of-the-mainstream views.

Reid could start with areas in which Nevadans are generally united. Angle’s support for storing nuclear waste in Yucca Mountain does not jibe with the vast majority of Nevadans who oppose it, and this would provide Reid with an excellent contrast, given his work in preventing waste dumping. He could then pivot to Angle’s views on Social Security and education. These commercials could provide voters their first picture of Angle’s plainly radical viewpoints.

Next, Reid could turn to undermining Angle’s basic credibility, just as he did with Lowden, by discussing her abysmal Assembly record. The title "worst legislator in the state" seems tailor-made for a 30-second ad, and Reid might even get Reno's Republican mayor, Bob Cashell, in an advertisement, since Cashell promised to back Reid if Angle won the GOP nod.

Finally, Reid could focus on the crazy -- Angle’s stance on alcohol, her ties to Scientology, and her long stream of inflammatory statements, from foreign affairs to the federal government, hammering home the idea that Angle simply doesn't fit with what is a swing state.

Defining an opponent early matters. Just ask Florida Gov. Charlie Crist, who entered the Florida Senate race last year with an enormous financial advantage over his conservative opponent, Marco Rubio. But rather than use his overwhelming fundraising to smother Rubio’s candidacy in the cradle, Crist sat on his hands, allowing Rubio to build a beachhead and ultimately move so far ahead that Crist abandoned the GOP entirely.

If Reid is smart, he'll strike now. Given Angle’s past election showings, and the fact that she has no money and a threadbare campaign organization now, she might not respond well to a quick assault and could crumple under the pressure.

Harry Reid did exactly what he needed to do in the Republican primary. He should be even more aggressive in the general. It might be his only chance at another term.