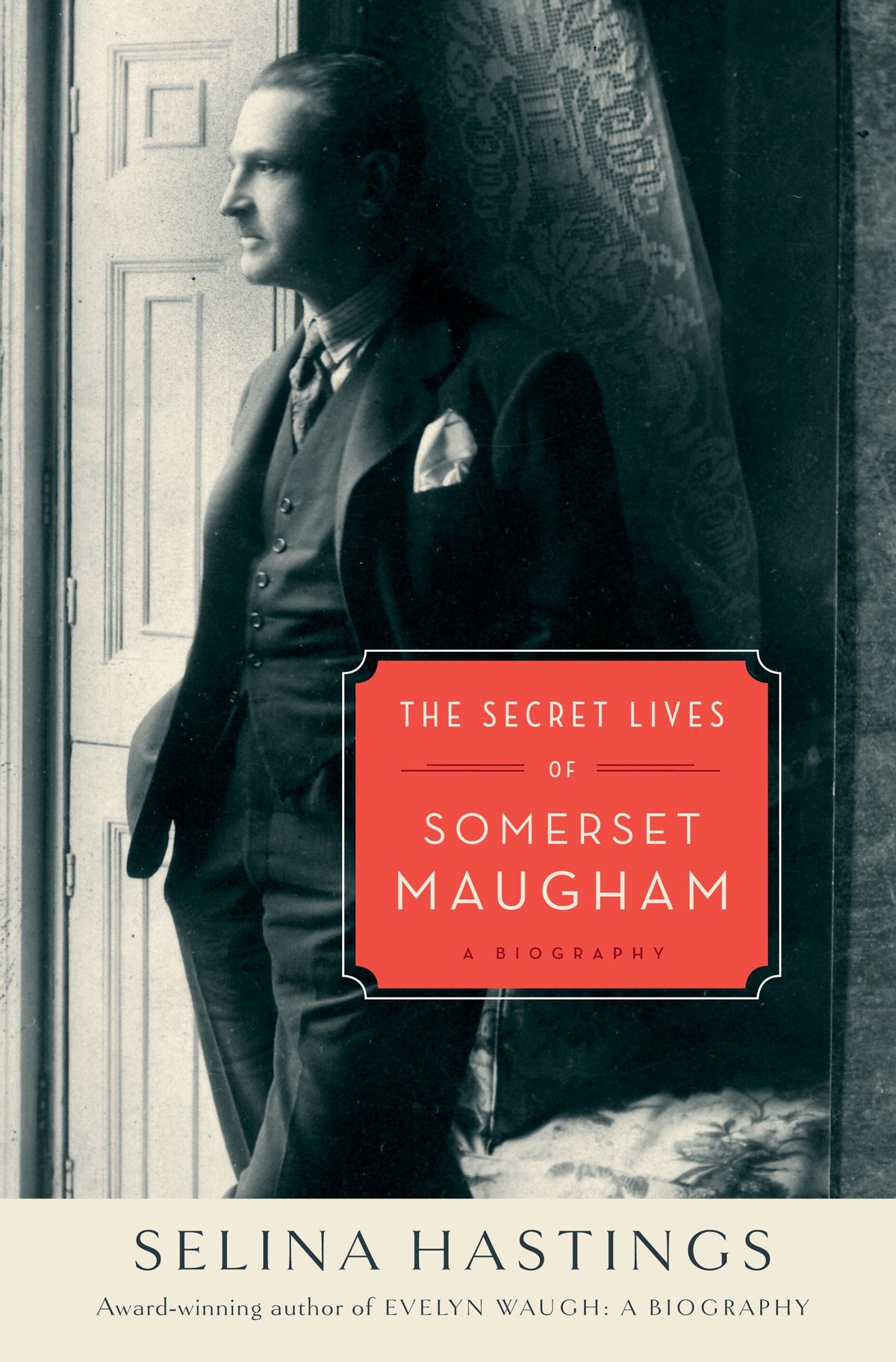 Like George Orwell, Henry James and other untrusting souls, W. Somerset Maugham wanted no biography; but unlike them, he provided a lesson in the odium which an indiscreet account of a life can bring by composing his own. Written when he was 88, Maugham's memoir, "Looking Back," was met by disgust and dismay at the venomous portrait the author drew of his deceased former wife. "Entirely contemptible" (Nöel Coward), "a senile scandalous work" (Graham Greene), "shabby, sordid, embarrassing" and "a wildly faggoty thing to have done" (Garson Kanin) were some of the responses.

Maugham had been urged into this terrible misstep by his lover and general factotum, Alan Searle, who had been promised the proceeds from its publication, and by press baron Max Beaverbrook, who had newspaper sales on his mind. It was a miserable way to cap off a writing life which had made Maugham one of the most famous authors in the world and certainly the richest. That memoir, along with Maugham's acrimonious, well-publicized break with his daughter and her family, his notorious thralldom to Searle, and the ever-continuing speculation about what wicked things went on at his villa on the French Riviera, have left a miasma around Maugham's whole life. That he made bonfires of his papers and directed his correspondents to burn all his letters has not only thickened the air of unseemliness, but has also made writing a substantive biography difficult. Attempts have been made; but none so far has the scope and grace of Selina Hastings's. Though she is the first biographer to be granted access to Maugham's remaining papers, it is really her own command of the territory, empathetic judgment, and dexterous use of sources that make "The Secret Lives of Somerset Maugham" the brilliant work that it is.

William Somerset Maugham, much the youngest of four surviving brothers, was born in 1874 in a rigged-up maternity ward in the British embassy in Paris, a little bit of England arranged for British subjects to evade having their newborns registered as French citizens. The first and all-encompassing tragedy of Maugham's life was the death of his mother when he was eight, the trauma leaving him with a life-long stammer. A couple of years later, his father died and young Maugham was sent by himself to live with his married uncle, a clergyman, the model for the Vicar of Blackstable in the novel "Of Human Bondage" (1915). ("He was not a cruel man, but a stupid, hard man eaten up with a small sensuality.")

Thus began the "period of utter desolation" that was the rest of Maugham's childhood. At 16, he went to Heidelberg to learn German and, as it happens, to lose his virginity to a fellow Englishman. Returning to England a year later, he spent five years studying and practicing medicine at St Thomas's, a charitable hospital in Lambeth. It was there, he said, that he learned everything he knew about human nature. The immediate result was his first novel, "Liza of Lambeth," published in 1897, which launched his literary career -- an impoverished one until he turned to the theatre in 1907.

His first play, "Lady Frederick," a comedy of manners, was an immediate success, as were most of the plays that followed in the next two decades -- a success, that is, at the box office and in the eyes of the general public. The mandarin view, expressed by the critic Desmond McCarthy, was more dyspeptic: "They were just cynical enough to make the sentimental-worldly think themselves tough-minded while they were enjoying them, and just brilliant enough to satisfy a London audience's far from exacting standard of wit." This pretty much sums up the high-literary disdain for Maugham's work, books included, that endures today. It galled the author for the rest of his life: "The intelligentsia," he wrote, "flung me, like Lucifer, headlong into the bottomless pit. I was taken aback and a little mortified." Be that as it may, Maugham's success as a playwright freed him from what had begun to seem the fiction writer's drudgery: "Thank God," he later recalled saying to himself, "I can look at a sunset now without having to think how to describe it." In fact, however, he did continue to write novels, short stories, and travel pieces -- and, by the early 1930s, decided he loathed the theatre.

If the defining heartbreak in Maugham's life was the death of his mother, its turmoil was, in one way or another, the result of his sexual orientation. The trial, imprisonment and ruination of Oscar Wilde in 1895 haunted him, lending urgency and a certain pathos to his insistence that he was three-quarters "normal" and only one-quarter "queer." Maugham was convinced that to gain "peace and a settled and dignified way of life," he should get married. Hastings conveys how truly and chillingly he believed this, to the extent, indeed, that even after his own harrowing experience with the married state, he still recommended it to his nephew Robin, also gay.

The first woman Maugham sought in marriage turned him down; the second relentlessly maneuvered him into it. This was Syrie Wellcome, separated wife of the pharmaceutical manufacturer Henry Wellcome, daughter of the social reformer Thomas Barnardo, mistress of Gordon Selfridge, the department store tycoon, and, in time, the model for Evelyn Waugh's hardnosed operator, Mrs. Beaver, in "A Handful of Dust."

To make a long, unedifying story short, the marriage was a disaster: The couple had nothing in common in taste or expectation. Moreover, as Hastings observes, Syrie "made the fatal mistake of falling in love with her husband." Her neediness and jealousy were aggravated by Maugham's having already found the love of his life in the American charmer Gerald Haxton: an outgoing hedonist, "a bit of a chancer," and a bona fide sex pot. But the marriage was also doomed by Syrie's "moral crassness," best represented in her turning the Maugham establishment into an interior decorator's salesroom. The last straw came when she sold her husband's long-cherished writing table right out from under him.

Hastings brings an extraordinarily deft touch to the relationship between Maugham's life and his many plays, novels and stories. She presents brisk summaries and just enough detail to place the works in the culture at large and, most nimbly, to illustrate what they drew from the circumstances of his own life. Maugham was a spy in Switzerland and Russia during the First World War, his experiences yielding "Ashenden: or the British Agent" (1928), which inaugurated the modern spy story (influencing Eric Ambler, Graham Greene and John Le Carré), and which also became required reading for entrants into MI5 and MI6. In the next war, after a grueling escape from the Continent ahead of the Nazis, Maugham became a propagandist in the United States, eventually going to Hollywood for a brief, disheartening, most entertainingly described period. He was a world traveler for most of his life, excursions which Hastings presents in adroitly assembled detail. The foreign trips allowed him to spend time with Haxton, whose earlier misdeeds had gotten him banned from Britain; but mostly he was drawn to the strange and exotic and was fascinated by the bitter tensions in colonial communities, all fodder for his pen.

His fiction reflected his appetite for news of other people's lives, an appetite shared by his increasingly large audience of readers. On the other hand, those unfortunates whose own characters and circumstances had provided his subject matter felt violated. This was especially true of people he had heard of, met, or even been the guest of in those moribund colonial outposts, men and women who discovered their stories or something very like them in "The Trembling of a Leaf" (1921), "On a Chinese Screen" (1922), and "The Painted Veil" (1925). To be sure, London's literary world provided rich fodder as well. Hugh Walpole, scarcely disguised as Alroy Kear in "Cakes and Ale" (1930) (which also features a Thomas Hardy-based character), was almost driven mad by the unflattering portrayal. It is hard not to think that Maugham's popularity relied on his punishing eye as much as his storytelling might, considerable though that certainly is.

Maugham's 30-year affair with Haxton ended unhappily, the younger man having become an impossible drunk, to some extent because he had nothing to show for his life except his relationship with Maugham. His death plunged Maugham into a frenzy of grief and self-castigation. In Alan Searle, his final lover, Maugham sought "the ideal companion," but instead found a man whose sweetness was offset by "something unctuous and money-grubbing in his demeanor." Developing into a "podgy Iago," Searle bore an animus against Maugham's daughter and connived at the old man's paranoia and isolation. In 1965, Maugham finally died, demented and terrified, in the Villa Mauresque in Cap Ferrat, once the scene of untold, perhaps unspeakable, revelry.

Hastings is masterful throughout in creating a sense of place and personality, melding sources with an alchemist's hand to create a lively, seamless narrative rich in apposite quotation. She has also furnished the book with excellent, telling photographs of most of the major players. It is impossible to think that this biography will ever be surpassed.