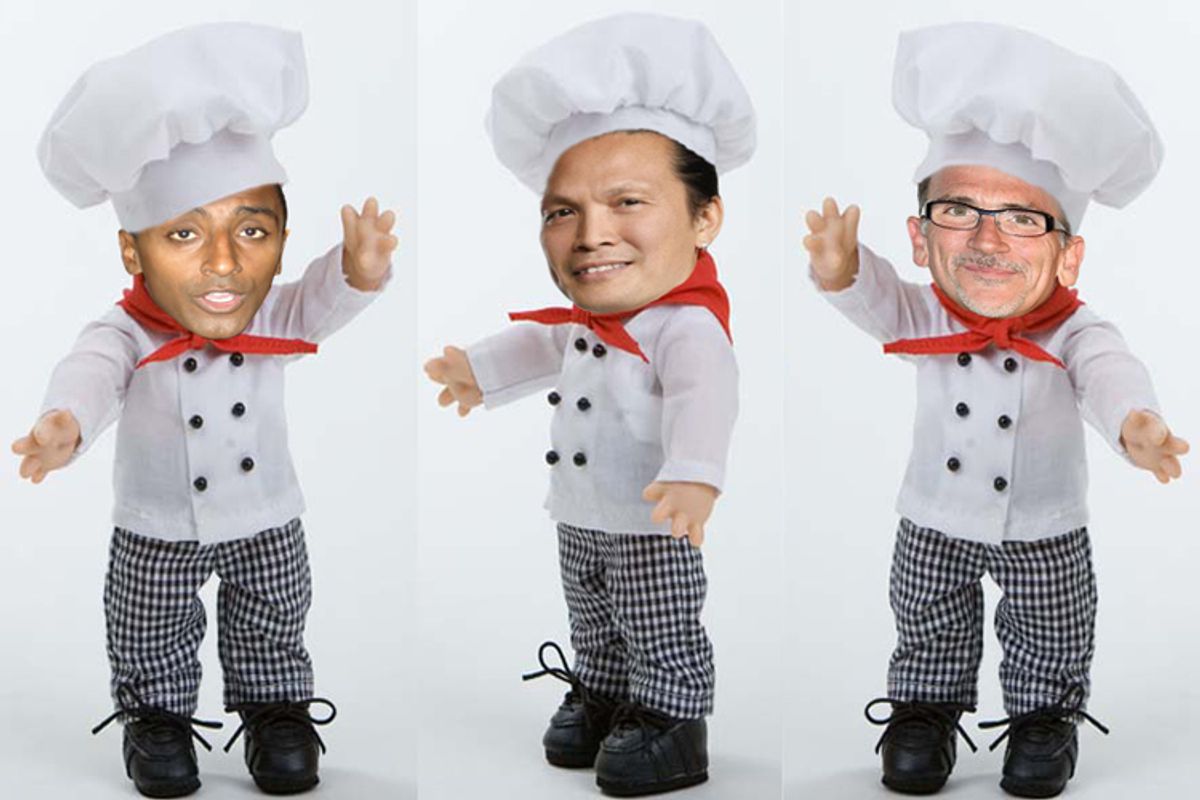 Unrealistically ambitious plans. Uncooked proteins lying about, glistening menacingly. Quirky ovens. Clocks ticking down. Stressed out human beings, running around in little circles, wailing in agony, knocking into each other, dropping stuff on the floor, sweating, cursing, slicing their fingers off with sharp knives. "Top Chef Masters" has more than a little in common with the nightly routine in my house.

Luckily, my judging panel doesn't mind a sloppy presentation or overbearing acidic notes as long as the dish in question is covered in melted cheese and/or it just feels right when you rub it into your scalp. (That's my smallest judge's way of communicating that classic Gail Simmons style of high praise, aka "I could bathe in this" or "I want to stick my entire head into a vat of this" or "I could eat this until I quite literally explode.")

In contrast, the celebrity chefs on the "Top Chef Masters" finale Wednesday night were held to such a ridiculously high standard that it was almost too much to bear. Super chefs Rick Moonen, Marcus Samuelson and Susur Lee all prepared dishes that made the judges and guest judges gasp and gush and sigh deeply over their marvelous textures and flavors.

Of course, the stakes have been sky high all season: When that finicky Saveur editor James Oseland or skeptical Jay Rayner or passionate food fetishist Gail Simmons weigh in, it's hard not to squirm along with the cheftastic heavyweights on the chopping block. And thrillingly enough, these chefs often don't agree with the judges' assessments – but they purse their lips and tolerate Oseland's sniffing and Rayner's grumbling and Simmons' finger-licking and host Kelly Choi's terrible outfits. They're restrained that way.

In fact, the one thing that I find disappointing about the professional chefs on "Top Chef Masters" is their unflagging professionalism. Sure, this is an elaborate publicity/charity event for Susur, Rick and Marcus, just one part of a multi-tiered marketing strategy that involves a restaurant (or two), a cookbook, maybe a speaking tour after this, and God knows what else. These men are food artistes, sure, but they're also figureheads promoting their personal brands. They have to stay cool.

But most of us would prefer to see them losing their heads occasionally, "Real Housewives"-style. Perhaps this is what made the second season finale of "Top Chef Masters" so particularly delightful, and what has made the previous two episodes so satisfying as well. Instead of remaining calm as Persian cucumbers going into the home stretch, Susur, Rick and Marcus begin to look a little shaken. They seem to forget about their empires back home and what this win will mean for their favorite charities. Instead, their egos get wrapped up in the game.

A few minutes into the finale, Marcus raves that winning would mean having "bragging rights forever." Susur says that "being a chef is like being a Ninja. Your mind has to be very strong." Rick says his friends have been giving him hell about his elimination last season, so he wants to redeem himself, but he also wants money for his charity. Rick is a talker. Most of all, he says, he doesn't want to let anyone down.

"I think my biggest competition is Susur," Rick admits. "He's an enigma. He is so confident that he emits an intimidation. He doesn't have any doubt, any hesitation whatsoever in what he does. Once you're in that state of mind, you're unstoppable. I predict that it's going to come down to Susur and me."

Let's see what the judges and guest diners have to say about that. Apparently the regular judges will be joined by Tom Colicchio, plus the three finalists from last season, Hubert Keller, Rick Bayless, Michael Chiarello.

"It's a very emotional thing. Three plates gotta tell my story," says Susur. "It's pretty heavy." He then explains that his first wife died when the Korean Air Lines Flight 007 was shot down over Russian airspace. See how throwing in a little emotional backstory works? Now I want Susur to win.

Next, Marcus sees Rick trimming some dark red meat and asks, jokingly, "What fish is that? The venison, the holy fish of the forest?" See how humor works? Now I want Marcus to win.

Once the cooking comes into play, I'm even more confused. The judges and guest diners love the first courses across the board, but particularly love Marcus's. "I don't think the execution is quite there," Rayner says of Rick's second course, and they're also underwhelmed by Susur's second, but they love Marcus's again. Third course, Rick Bayless is blown away by Susur's Lamb Thailandaise with Chiang Mai sausage, saying "It's sooo good."

"This is going to be a very difficult one to call," says Bayless.

Back at the "Top Chef Masters" table, the three finalists are having a beer together. Rick Moonen is feeling expansive, as he often does. "There are no losers here, really," he says.

This is lost on Susur, who replies, "Well, there will be two, right?" Rick just stares at him blankly.

Well, OK, all she really says is that the black bean sauce was "so sweet" and "the texture was beautiful." But we know what she means.

The judges in general have some problems with Rick's second course, and with Susur's. Gail Simmons says that Marcus's flan blew her away. James Oseland is actually grinning, about the food, which is a little unnerving. There aren't a lot of flaws to evaluate. Maybe they should rub each course all over their bodies to see how it feels.

"And now it's out of our hands," says Rick once the chefs are safely back around their special round table. Each chef takes a big glass of red wine and chugs it with a speed that suggests that they've been prohibited from drinking heavily up until now.

Jay Rayner says Rick's oyster was the best oyster he ever had. The judges agree that Susur's meal's "highs were exceptionally high." Gail says Susur reinvented tastes. Rayner says Marcus's foie gras flan was an "extraordinary, extraordinary thing." Rayner is moved by Marcus's story, but Oseland does not appear quite as moved by Marcus's last dish. Basically, each of the chefs presented one dish that was problematic, and everything else was spectacular. It's tough to even guess who might come out on top.

Somehow, a decision is reached, and the chefs are called into the room. Susur gets 17 stars, which is impressive. Incredibly enough, Marcus gets 17 ½ stars, with Simmons and Raynor each favoring him, and Oseland not.

Susur is out, and looks pretty crushed. It's down to Marcus and Rick.

Oseland says that Rick has "raised the bar on cooo-linary mastery." And then he asks Rick, "Can I marry you?" Oseland, who really does seem to want to have a million of Rick's babies, gives Rick five stars. But the diners give Rick four stars. Marcus wins by half a star! What a finish! (Now it's Rick's turn to look crushed.)

"People all over the world will celebrate this with me. I guarantee you that," says Marcus. Who knew that a win for Marcus would mean worldwide celebration? Now I wish Rick had won.

But to be fair, the final competition was so tight that any one of these three chefs really could've taken home the title of "Top Chef Master." They made it through an insanely stressful series of challenges, and they did it without insulting each other ruthlessly, attacking each other with their bare hands, or bringing shame on their families. They cooked great food and they remained professional to the very end. There are no losers here tonight!

(Well, there are two, actually. Rick and Susur. Sorry, guys!)