Sure, the surprise Democratic nominee is an unqualified weirdo. But don't you see the beauty in that? 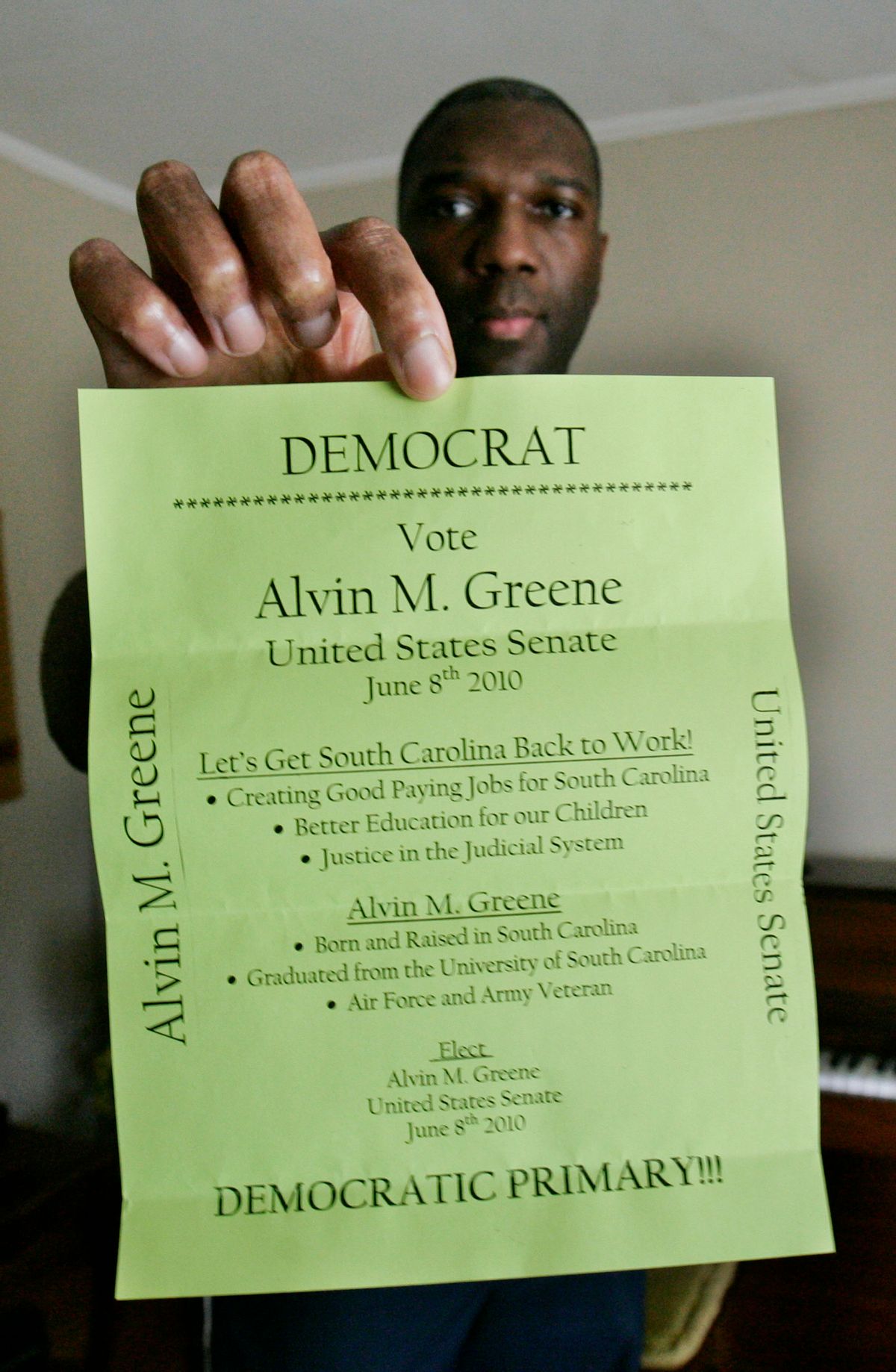 What does a party do when some random schmuck wins its primary? This is what South Carolina Democrats are now trying to figure out.

An unemployed accused felon named Alvin Greene appears to be their nominee for U.S. Senate. Party leaders had lined up a former state legislator named Vic Rawl as the chosen candidate against incumbent Sen. Jim DeMint, so they're wondering how the hell this happened. And talk is starting to circulate that Greene is some kind of Republican plant, aided by the other party. Said Rep. Jim Clyburn, the third-ranking Democrat in the House of Representatives, "There were some real shenanigans going on in the South Carolina primary. I don't know if he was a Republican plant; he was someone's plant."

I obviously don't know more about the situation in South Carolina than Clyburn, but I think the more pertinent fact is that nobody yet seems to know anything. So I'd like to mount a qualified defense of Greene.

First of all, upsets of this nature do happen once in a while, though rarely in statewide races. In 2009, Tom Suozzi, widely thought of as a possible future governor or senator in New York, lost reelection completely unexpectedly as Nassau County executive to an unknown. Suozzi was sitting on an unspent $2 million, presumably socked away for some future statewide race. In 2007, the New Jersey Republican stronghold of Morris County rejected Freeholder John Inglesino unexpectedly. Like some Democrats have done with the current South Carolina situation, Inglesino blamed his surprise defeat on his place on the ballot. (Note that there's actually good scholarship showing that ballot placement can have a real effect, though the argument is more about differences of a couple points in races between well-known candidates. It seems possible that it'd be dramatically magnified in races between unknown candidates, but that's just me speculating.)

More to the point, though, the South Carolina Democratic Party blew it, and is embarrassed. Of course its leaders are going to say Greene was a plant. That doesn't mean he is or isn't. It just means we shouldn’t take their word for it.

Instead, let's take note of the fact that the guy who was supposed to get nominated, Rawl, is one of those gray white dudes with a law degree who's spent the last 25 years sitting on commissions. There's nothing wrong with that -- it's called public service -- but there's no reason anybody should know his name. And, indeed, nobody does. In a poll of South Carolina Democrats last month, Rawl had a favorable rating of 4 percent. Eighty-two percent had no impression of him.

It's also important to remember that Rawl was never going to win the general election anyway. It's South Carolina in a Republican year. That would be almost impossible for a good candidate to overcome, and Rawl is a weak challenger facing an incumbent who's at least moderately well-liked. Rawl was a classic sacrificial lamb, selected because he's plausible enough on paper not to embarrass the party or hurt the down-ticket candidates. So it's not as if nominating Greene really will cost Democrats a shot at the seat. You have to admit: There's something vaguely joyous about a no-name guy who lives with his mom screwing up the best-laid plans of the pack of pragmatic losers that is the Democratic leadership of South Carolina.

Granted, Greene's main issue in the race appears to be the reunification of Korea. And while that marks him as a bit eccentric (in case you hadn’t realized), it doesn't exactly make him David Duke, either -- so far as I can tell from the very limited information we have and the very strange interviews he's given. Nor does an odd but kind of sweet concern with Korea match up too poorly against any of the wack-job ideas of incumbent DeMint, who once actually uttered the sentence, "The biggest tent of all is the tent of freedom," and has described our current government as "national socialism." (That is, Nazism.)

Obviously, it's still very possible that horrible things will emerge about Greene, and make me look like an idiot for writing this. (In fact, he already is accused of fairly horrible things -- though not convicted.) In the meantime, though, it's satisfying to see something as lower-case-democratic as a random black guy winning for no clear reason. We may not be able to interpret votes for Greene as any affirmative popular endorsement of whatever his candidacy stands for. But we sure can read it as a rejection of the dull, hackish cynicism of the Democratic Party and its expectation that South Carolinians will vote for some un-embarrassing nonentity. And if nothing else, that's kind of fun.