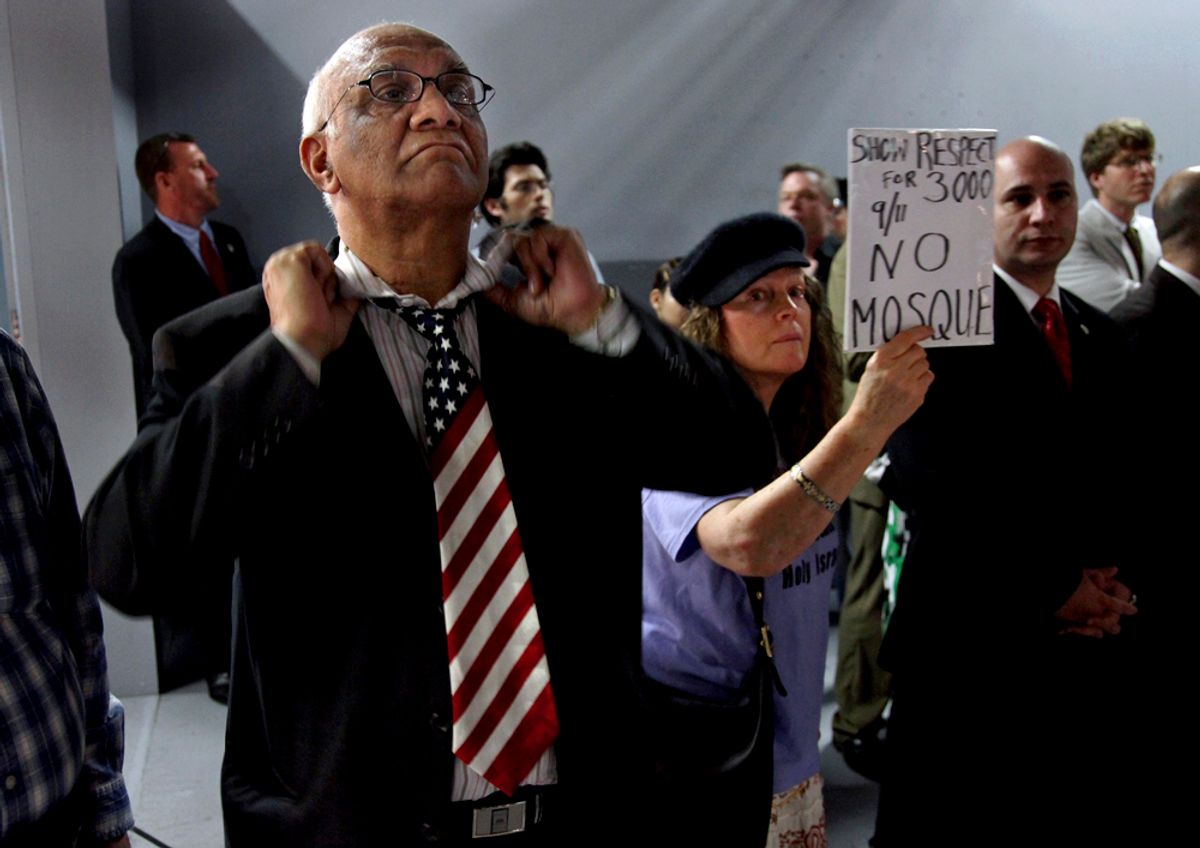 Arish Sahani, left, of New York, puts on an American Flag tie, and Linda Rivera, right, of New York, stand in opposition as groups planning a proposed mosque and cultural center near Ground Zero in Lower Manhattan to be named Cordoba House showed and spoke about their plans for the center at a community board meeting in New York Tuesday, May 25, 2010. Community members both for and against the plan spoke during the meeting. (AP Photo/Craig Ruttle) (Craig Ruttle)
--

Conservatives, guided by the New York Post, have been campaigning against the so-called Ground Zero mosque (actually an Islamic community center planned for lower Manhattan). That campaign has now led to protests against mosques opening anywhere in New York City.

One mosque is planned for an empty convent in Staten Island. If you know much about Staten Island (ahem), you will not be surprised to learn that many residents are unhappy with the idea of Muslims having a place to worship in their community.

Almost 400 people attended a town hall to discuss the mosque. The Post reprinted a wire story, but the Times actually sent a reporter to capture the scene.

Guess what? The opposition is based almost entirely on paranoia, stoked by misleading claims by the right-wing media:

“I was on the phone this morning with the F.B.I., and all I want to know from you is why MAS is on the terrorist watch list,” said Joan Moriello, using the acronym for the Muslim American Society. Her question produced a loud, angry noise from the audience.

The MAS is not on any terrorist watch lists. But if you read conservative blogs, you "learn" that anyone in any Muslim organization has shadowy ties to Hamas and Hezbollah:

Among them: “Is Sharia law better than democracy in your view?” “How do you feel about the role of women in society?” “What are your views on Israel?” “Can you point to any single statement in the Koran that you would consider to be incorrect?”

The mosque, again, is planned for a now-empty convent. You can pretty easily come up with versions of all of those questions that could be posed to a Catholic organization. You wouldn't even need to change the one about women.

Much like the rally against the "Ground Zero mosque" that collapsed into intimidation of Middle Eastern Christians, the crowd's hatred led to a moment of cognitive dissonance:

But just 20 minutes earlier, as Bill Finnegan stood at the microphone, came the meeting’s single moment of hushed silence. Mr. Finnegan said he was a Marine lance corporal, home from Afghanistan, where he had worked as a mediator with warring tribes.

After the sustained standing ovation that followed his introduction, he turned to the Muslims on the panel: “My question to you is, will you work to form a cohesive bond with the people of this community?” The men said yes.

Then he turned to the crowd. “And will you work to form a cohesive bond with these people -- your new neighbors?”

The crowd erupted in boos. "No!" someone shouted.

Right. Good. Booing a veteran for telling you to be kind to your neighbors. Which group's religion proves they're a threat to the country, again?