Searching for life at Rand Paul HQ -- and finding none

Salon's week-long search for something, anything from the Kentucky Republican's campaign 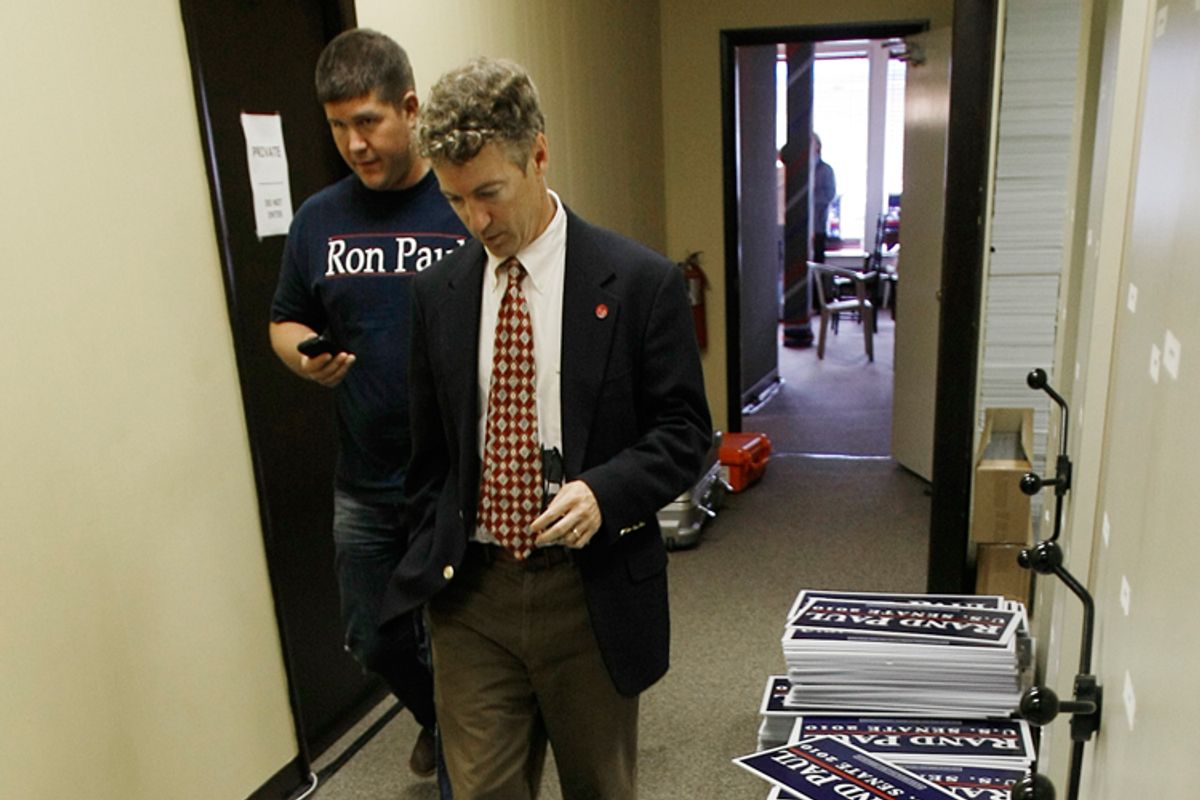 Rand Paul, walks down a hallway at his campaign headquarters in Bowling Green, Ky.
--

I'm an intern, but Rand Paul doesn't know that. Nor does his campaign office. For all they know, I'm Salon's most influential writer. Or I could be a concerned Kentucky citizen; a potential supporter of Rand Paul for U.S. Senate with avid interest in his views on deficit spending. For all they know, I could be anyone. But Rand Paul and his campaign workers know absolutely nothing about me, because they are impossible to contact.

Last Friday, we wanted a comment from Paul about the Israeli flotilla attack (especially since his father, Ron, vociferously condemned it). But after a slew of emails, unreturned voicemails, and some rookie muckraking, we've heard nothing from the Rand Paul campaign -- not even a "no comment." I don't care about his views on Israel anymore; I just want to talk to a human voice.

Not so, it seems. Let me take you throught the trials and tribulations of trying to reach a campaign that may very well be run by robots -- non-responsive robots.

The starting point for most journalists looking to contact a politician running for office is the campaign website's contact page, which tends to list addresses and press contact phone numbers. No such luck with Rand Paul's site. Rather, I had to fill in a generic form on the website explaining my inquiry. And I never heard back. There was also a toll-free number listed, but when I dialed it, I immediately was sent to voicemail, with no human intermediary. I left a message last Friday -- and never heard back.

Not to be defeated, I got creative. Actually, my editor got creative, and I tend to listen to him. We found the contact information for a political writer based in Kentucky and asked him if he had any email addresses or phone numbers of actual people on Paul's campaign team.

It turns out that Kentucky journalists, unlike their aspiring libertarian senator, are responsive and helpful. The upshot: I got the email address of David Adams, Paul's campaign chairman (and, until recently, his campaign manager).

"Dear Mr Adams," I wrote, "I was hoping you could help me with an inquiry regarding Dr. Paul. We were interested to find out whether Dr. Paul was talking to the press at all at this moment, and if he is not, is his campaign press office fielding media questions?"

Within minutes, Adams graced my inbox with a response: "I'll be glad to help with any questions." Brilliant. Thank you, Mr Adams. So, I asked Mr Adams about Rand's views on the flotilla attack -- and was met with silence. Cold, stony, Internet silence. "Glad to help," indeed.

Fast forward one week, to this morning. Once again, I tried all of the contact avenues. I even pretended to be a Kentuckian and used the "voter inquiry" option on his campaign's voicemail. I left a message. No reply, yet again. In desperation, I went to directory assistance, looking for an alternate Paul campaign number in Bowling Green, Kentucky (where his headquarters are). I was given a non-toll-free number, but it was a dud -- ring, ring, ring, ring, followed by silence. Cold, stony, phone line silence.

I called Jesse Benton again. I left him a voicemail and sent an email to his private Gmail account. I also emailed David Adams again, hoping he'd this time come through with his purported gladness to help. Alas, he did not. And so, in a final act of desperation, I penned him this missive:

I emailed last week to ask if someone at the Rand Paul campaign office was fielding press questions, and you responded that indeed you were. However, both times that I have asked for some comment on Dr. Paul's views on Israel for Salon, I've received no response at all. I've also left messages on the campaign office phone number, but have never been able to speak to a human voice. Even when I called and chose the "voter inquiry" option, I was directed to leave a message.

I was hoping you could help me understand why the campaign has not been able to respond to a basic media query,

On tenterhooks, I will continue to wait for a response  -- some response, any response, any sign of life -- from the Rand Paul campaign.