How do families live around the world? These books introduce a diverse planet to a young mind 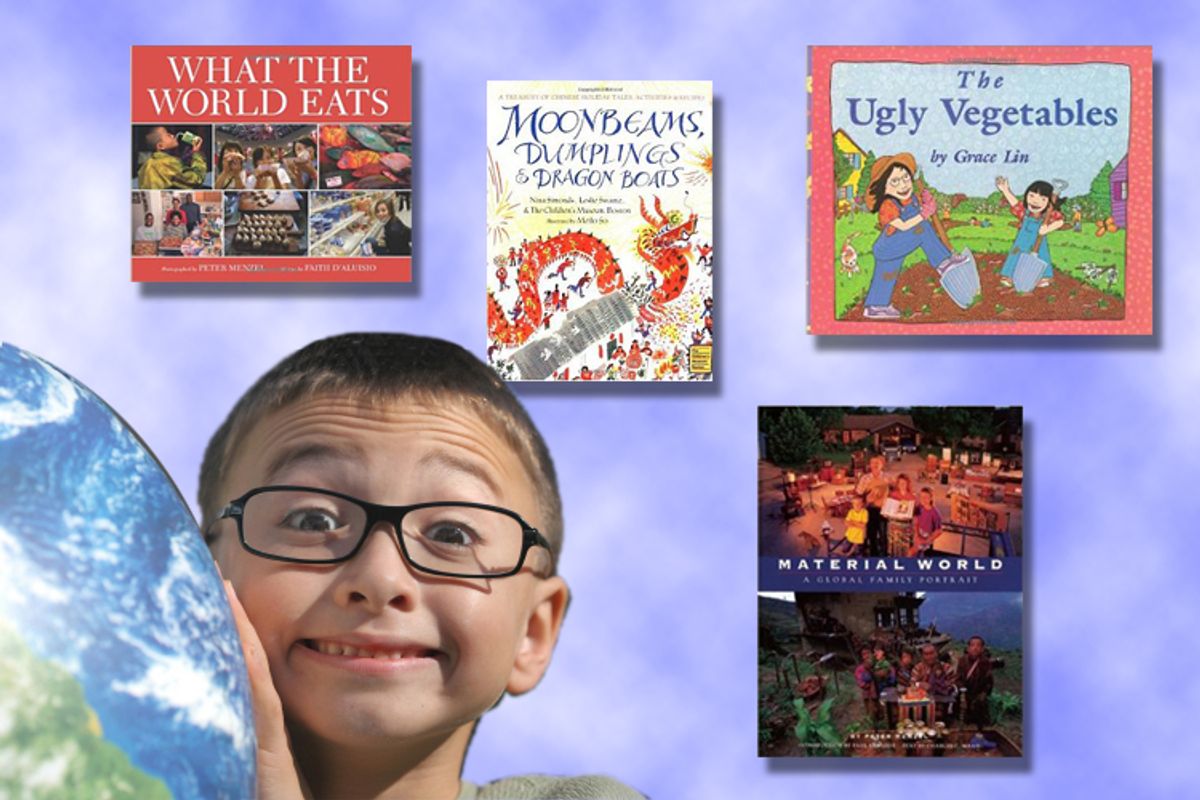 Are your kids bored? Are you tired of their obsession with Hannah Montana and Disney princesses? Here's a list of books that will open their minds and imaginations to the rest of the world -- and help them better understand their own.

How Do People Live Around the World?

This beautiful book of photographs and cultural anthropology is a fascinating exploration of how families live around the world. In 1994, the U.N.-sponsored International Year of the Family, photojournalist Peter Menzel conceived of this project to capture the lives of typical families in 30 nations across the globe. In each vignette, he and his collaborators photographed families posing in front of their homes and literally alongside all their world possessions. The photographers spent a week living with a "statistically average" family in each country and interviewed them about their lives, their work and their attitudes toward their possessions. The stark visual contrast between the portrait of the average family in Texas with their multiple televisions versus the family living in a dirt house in Mali is enlightening and thought-provoking. Sometimes a picture truly can say a thousand words.  The book also includes statistics on numbers of toilets and televisions, and GDP to further illuminate the disparities.

This is not a children's book, per se, but I would recommend it for all ages. This book is sure to engage a reader of any age, and lead to discussions about wealth and materialism. It might even make the average American child realize just how lucky he is.

A storybook with beautiful, colorful illustrations, "Mama and Papa Have a Store" depicts the mundane daily life of a typical preschooler. She happens to be of Chinese descent growing up in Guatemala with her family, but her story will be familiar to any young child: going to school, eating with her family, playing and observing her parents working in her family's general store. This is a very special cross-cultural story, involving Chinese, Guatemalan and Mayan traditions: "They call [Mama] doña Graciela. But in Chinese her name means Lady Who Lives in the Moon. [Papa] is don Rodolfo in Spanish, and in Chinese his name means Fragrant Pond."

What Do People Eat Around the World?

3. "What the World Eats" by Faith D'Aluisio and Peter Menzel, all ages

This is another beautiful and intriguing volume by the author who wrote "Material World," in conjunction with his wife. In a follow-up to his first book about how the average family lives around the world, this book looks at and visually describes what the average family eats. Using the same format as in "Material World," the authors of this book depict a week's groceries for typical families across the globe. The authors spent time with 25 families in 21 different countries to provide this comparative international portrait. Cost and calories are included, but it takes only a glance at the photos to see the shocking differences between the pizza-eating and soda-drinking American families (six gallons a week!) and the families with vegetable-based diets in many other countries. Some of the interesting statistics provided for comparison include number of McDonald's, and the prevalence of obesity and diabetes. In addition to being a launching pad for kids to consider how much or little families live on in other countries, this book is a great pictorial representation of why obesity and diabetes are epidemic in some countries, and not in others (yet).

Chinese food and culture expert Nina Simonds created this book for children to understand five major Chinese festivals, highlighted through tales, recipes and activities. She offers festival lore and folk tales that will be unfamiliar to non-Chinese readers. She tempts with mouth-watering yet simple recipes for dumplings and moon cakes. Also included are instructions for engaging activities to do with kids, such as building a kite at Qing Ming or a miniature dragon boat for the Dragon Boat Festival.

This is the story of Maria, a little girl who is excited to help out with her family's Christmas tradition of making tamales. She is even more excited by the idea of trying on her mother's diamond ring, which her mother takes off to knead the masa. Maria surreptitiously tries on the ring, and then forgets about it. Any kid who has ever done something in secret will relate to the terror Maria feels later when she can't remember what happened to the ring, and will share her relief when it is found, and she is ultimately forgiven. Along the way, you'll enjoy illustrations so warm and vivid with the colors of Christmas, you can almost taste the tamales.

Why Does Our Food Look Different from Everyone Else's?

The young girl who narrates this story is upset that her Chinese immigrant family grows vegetables instead of pretty flowers in their yard, like everyone else. She thinks the vegetables are ugly: "The wind always smelled sweet, and butterflies and bees flew everywhere. Everyone's garden was beautiful, except for ours."

When the veggies are ready for harvesting and go into a soup whose aroma entices the entire neighborhood, she has a new perspective on those "ugly vegetables," and a new appreciation for her family and culture. Written and adorned with lovely illustrations by the author, this is one of my favorite books to introduce acceptance of cultural differences. I also learned the names of some Chinese greens I previously didn't know. A recipe for Ugly Vegetables soup is included.

Does the Tooth Fairy Fly International?

7) "Throw Your Tooth on the Roof: Tooth Traditions From Around the World" by Selby Beeler and G. Brian Karas, ages 4-8

Do you know a 6- or 7-year-old with a gap-toothed smile? If they still believe in the Tooth Fairy, they might assume that she, or her representatives, visit children all around the world. Not so! In many cultures, it's a rodent, not a pretty and ethereal fairy, who manages children's lost teeth. This is a great book that describes tooth traditions from around the world. Fun for kids, and informative for the rest of us.