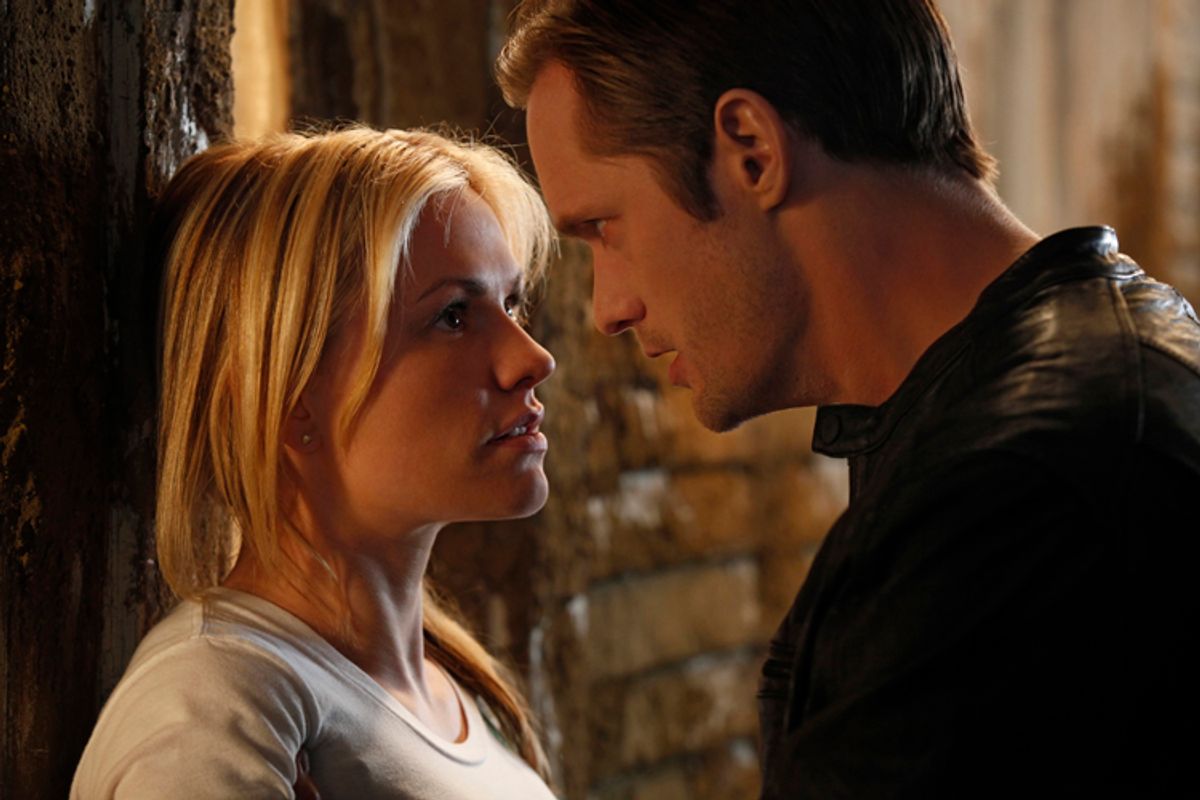 "The one time in my entire life I thought I was happy, I was a zombie." -- Tara (Rutina Wesley),"True Blood"

Sometimes I wonder if I'll wake up from these happy, golden years as a TV critic and say the same thing. But then the third season screeners of "True Blood" (returns 9 p.m. Sunday, June 13) arrive in the mail, and I forget all of that and instead plummet into a world so dark and dirty and hilarious and unnerving that it glamours me into a placid state, then leaves me wanting more.

How does Alan Ball do it? His vampire tale serves up the stickiest, filthiest, most delicious debauchery imaginable with reckless abandon. Whether Bill is throwing a flaming lamp at someone's head or Eric is biting into a foe and then apologizing to his hostess by saying, bashfully, "I got your rug all wet," whether Tara is weeping snottily into a bottle of Wild Turkey or slugging some racist rednecks in the face, whether Sam is earnestly discussing his roots with some strangers or ripping off his clothes and running through the woods as a dog, this show is filled with the kinds of curveballs that keep you slightly off-kilter, unsettled and unprepared for what might happen next.

While the orgiastic madness of Season 2 might be hard to top, the first three episodes of Season 3 look promising indeed, serving up one juicy twist after another, plus a steady flow of great dialogue, intense conversations, brutality, blackmail, mystery, suspense and, best of all, some wickedly funny moments that are beyond compare. Despite all of the campy, overly obvious commentary on prejudice, bigotry and marginalized subcultures that were always gumming up the works in the first season, "True Blood" had an addictive second season and now the show is reaching a new high. The cast's Southern accents finally sound reasonably natural, their performances are better than ever, and the storytelling has blown past X having a crush on Y and Z wanting to kill X, and landed in some slippery realm where everyone is trying to get over on everyone else -- you know, like "The Shield" except with vampires instead of bad cops and werewolves where the drug cartels should go.

Yes, werewolves. There's nothing quite like throwing a whole new demonic segment of society into the picture, and then letting the audience piece together what the motivations of this new group might be. Werewolves are scary but apparently conquerable, as long as they don't have any vampire blood to drink. If they do, their strength grows exponentially, as a few of the key players on "True Blood" soon find out.

But there are other power plays in the mix, including the reemergence of Queen Sophie-Ann (Evan Rachel Wood) plus a new menacing figure who seems to have Bill stuck in a tight spot again. Somehow, though, "True Blood" never feels repetitive, partially because each scene is driven by some palpable conflict or tension. This is exactly what was missing from the show in its first season, a sense of underlying friction and energy, a feeling that every character is moving inexorably toward either self-discovery or self-destruction. Instead of just marking time, the show treats us to a new revelation, a new dynamic, a new problem every few minutes, and every scene has one or two great lines or wickedly nasty jokes. The second and third episodes of the season in particular made me shake my head, cringe, jump a little, chuckle, and laugh out loud several times.

Even when Tara (Rutina Wesley) and Lafayette (Nelsan Ellis) are talking about the darkness in their family or Sam (Sam Trammell) is trying to track down his birth parents, there's always some absurd detail or punch line lingering there. At a vampire dinner party, one of the hosts pours a drink for a guest, saying, "Chilled, carbonated blood. It's cruelty-free, all willingly donated. Note the citrusy finish. This one ate only tangerines for a week."

And I love Pam (Kristin Bauer), Eric's (Alexander Skarsgard) lesbian vampire sidekick, whose tone lands somewhere between madame, enforcer and high-end real estate agent. "Now, why'd you have to go and kill that Maenad?" she asks Sookie (Anna Paquin) upon entering her house. "She's a terrific decorator." These are the little touches that bring this series to life, and make you want to run out and buy Charmaine Harris' Sookie Stackhouse novel series to read in between episodes.

The story itself is richer and more provocative than it's ever been, and everyone seems to be working at cross purposes. Sookie wants to find Bill (Stephen Moyer). Eric wants to get with Sookie. Eric has a strange alliance with the Queen, and with Lafayette. Lafayette wants to be left alone, but he needs to take care of Tara in the wake of Eggs' (Mehcad Brooks) death. Arlene (Carrie Preston) has a problem. And Bill? Bill is struggling with a few choices about how to keep Sookie safe.

Everyone is struggling this season, even Jason (Ryan Kwanten), who feels terrible guilt in the wake of killing Eggs. "I'm not sure what normal is anymore," he tells Andy (Chris Bauer). Andy's response? "For now, you gotta be the Jason Stackhouse everybody knows, so conscience off, dick on, and everything's gonna be all right." Soon Jason discovers a higher calling, though -- as is his habit -- but will he ever really escape his essential "conscience off, dick on" animalism?

Newly minted vampire Jessica (Deborah Ann Woll) is wondering the same thing about herself: Can she get the upper hand on her urges, or is she doomed to follow her hungers and desires straight to hell? "We can fight our natures together!" her optimistic true love Hoyt (Jim Parrack) tells her, but is that even possible? Can anyone really overcome their nature? That seems to be the underlying theme this season, and mostly what we see at the outset are characters who feel powerless against their own fatal flaws.

If you've been bored by most of the dramas on TV this spring (I know I have),"True Blood" is here to refresh your palate with something truly delightful, absurd, riveting, and above all, depraved. If that doesn't sound tempting, well, as Eric would say, "With all due respect, I fear you're not considering all the angles."