Harry Reid can paint his Republican foe as an extremist and some GOP leaders are backing him. But will it matter? 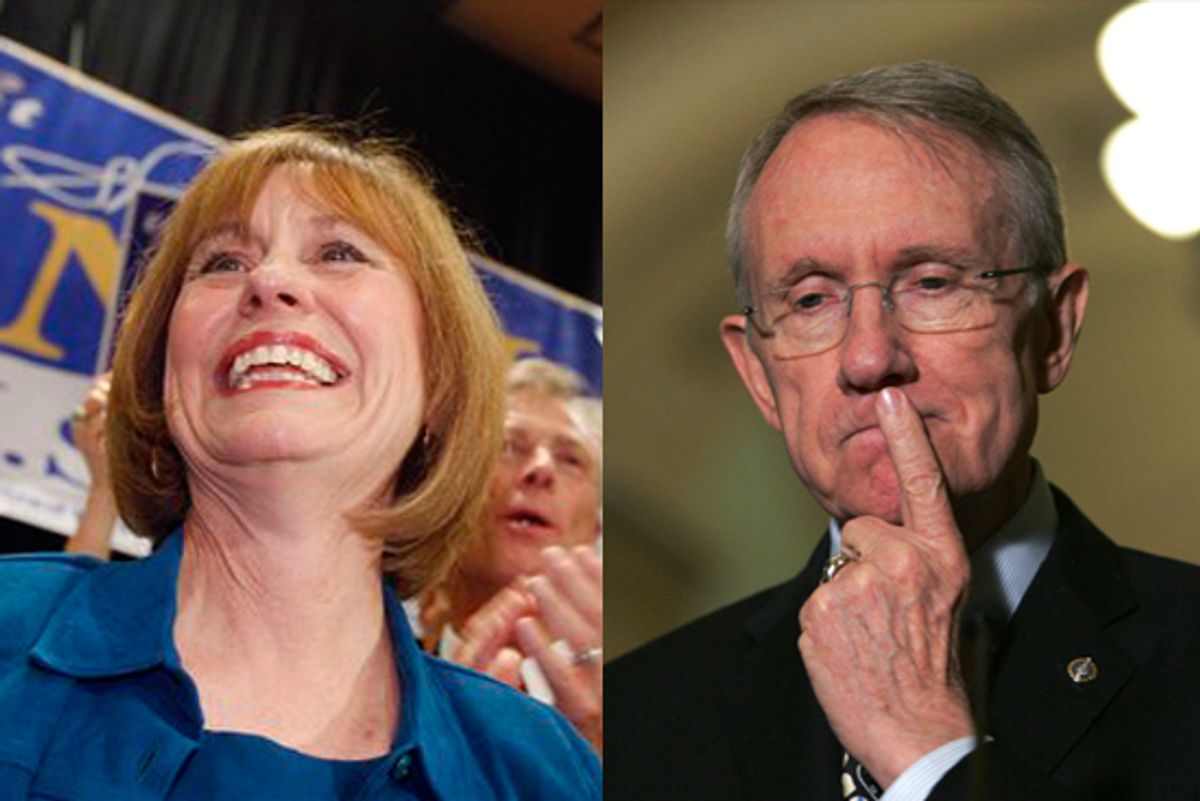 Since her victory Tuesday night in the Republican primary (a victory that was fueled, at least in part, by Tea Party activists and the Club For Growth), Angle’s campaign has gone almost completely silent. Her website went down briefly, then relaunched with a home page asking for donations, an issues page and a biographical page. Calls to her Las Vegas office were answered by extremely nice but somewhat confused volunteers, and no senior staff were available. Messages left with campaign spokesman Jerry Stacy were not returned.

Longtime Las Vegas-based Republican consultant Sig Rogich, who helped create Ronald Reagan's "Morning in America" ad in 1984, and who also worked with George H.W. Bush's communications team in 1988 and 1992, said the reason for Angle's vanishing act is simple: The national GOP has taken charge of what was previously a grass-roots campaign, which means a lot more money and a lot less control for Angle.

Most likely, the national party and its hired guns -- which already includes the Indiana-based firm the Prosper Group, which helped Sen. Scott Brown win in Massachusetts -- will keep Angle's campaign focused on the "Dump Harry Reid" sentiment, which is essential if she is to win. Right now, that message is still resonating, as post-primary polls have Angle carrying a double-digit lead over Reid.

However, her conservative (and sometimes radically so) political positions are already pushing moderate Republican leaders into Reid's camp. Rogich is one of them, although he's been a Reid supporter since "Day One" of the 2010 campaign. But he's not alone. After the primary, Reno Mayor Bob Cashell announced his support for Reid, as did the soon-to-be-ex-wife of Republican Gov. Jim Gibbons, Dawn Gibbons, who served in the state Legislature with Angle. State Senate Minority Leader Bill Raggio, who was challenged in a 2008 GOP primary by Angle, said he expects Angle to have trouble with moderates (though he would not commit to supporting Reid).

Phoebe Sweet, the communications director for the Nevada Democratic Party, said that "within a half-hour of the primary results, we had Republicans coming to support Reid."

Rogich said that he expects other influential Republicans to cross party lines and endorse Reid because of his importance to Nevada on the national stage. Even if they don't agree with everything he does, "you have to ask if you want somebody whose colleagues will just shake their heads in disbelief every time she speaks," a problem that critics say dogged Angle in the Nevada Assembly.

"I came at this as a Republican, and I don't agree with everything Reid does," Rogich said. "But he has done more for Nevada than any other previous senator. [By electing Angle], we'd be cutting off our nose to spite our face."

While Angle went underground, Reid and his supporters couldn't wait to talk. Reid's campaign launched a full-blown assault on Angle that began Wednesday. He's already run multiple ads -- which he can afford plenty of, thanks to a $9 million campaign war chest -- painting Angle as a radical, dangerous right-winger. Reid, who has been dogged by dismal job approval numbers all year,  seems to be licking his chops at the prospect of facing Angle.

That is, of course, because of Angle's politics. As Rogich said, "We're saying she's wacky, but we're not the first ones who have said it." Picking just one "wacky" position isn't easy, because there are so many: She opposes fluoridated water, she wants to abolish multiple federal departments, she has proposed a second prohibition, and she pushed a treatment program developed by Scientology, just to name a few.

However, Angle is anti-establishment, a significant calling card in an election season where incumbency is almost the worst thing for a candidate. Reno-based conservative blogger Kelly Anderson Wright wrote Saturday that Angle "most clearly reflects the mood of the majority of Nevadans: angry with Obama's government, anti-liberal and decidedly anti-partisan." She also said Angle's conservative politics were genuine, something that will keep Republicans loyal:

Sharron was a conservative "back in the day" when it wasn't cool to be conservative, when Nevada's blood ran Wolf Pack blue, with a state government that was so nauseatingly left that Sharron was often described as "difficult" by her fellow Nevada legislators. (My liberal family calls me "difficult" too, isn't that what liberals do?)

Indeed, in Nevada and other Western states, so-called crazy positions are often afterthoughts for voters. This year, specifically, Nevadans are mad as hell about what they see as out-of-control spending by Congress and President Obama, the lack of solutions on immigration and the healthcare reform. Oh, and the state is suffering with almost 14 percent unemployment, even after the stimulus spending.

If their anger is still palpable in November, Reid will have a difficult time because voters will simply vote against him. That actually happened with a notable number of voters in the Democratic Senate primary that Reid easily won. Taking second place, with more than 10 percent of the vote? None of the above, a choice that has been on Nevada ballots since 1976.

Rogich, however, said that what will bring voters to Reid are exactly those practical issues. At the top of the list is Yucca Mountain, which Reid has staunchly opposed and Angle supports, although she wants it to be a "reprocessing site" for nuclear waste, not just a dumping ground. Also, job creation will play a factor, especially if the economy turns around and unemployment drops. Finally, the dominant issue in the West since pioneer days -- water -- is a huge issue right now, with states fighting among themselves (and with Mexico) for their share of water, especially from the Colorado River basin. Should Nevada lose Reid, Rogich said, they would lose "a lot of leverage" in those negotiations.

And, Reid's supporters and national Democrats are hoping, that leverage is enough to earn him another term.