Suddenly, Harry Reid has a fighting chance. Is that bad news for Chuck Schumer and Dick Durbin? 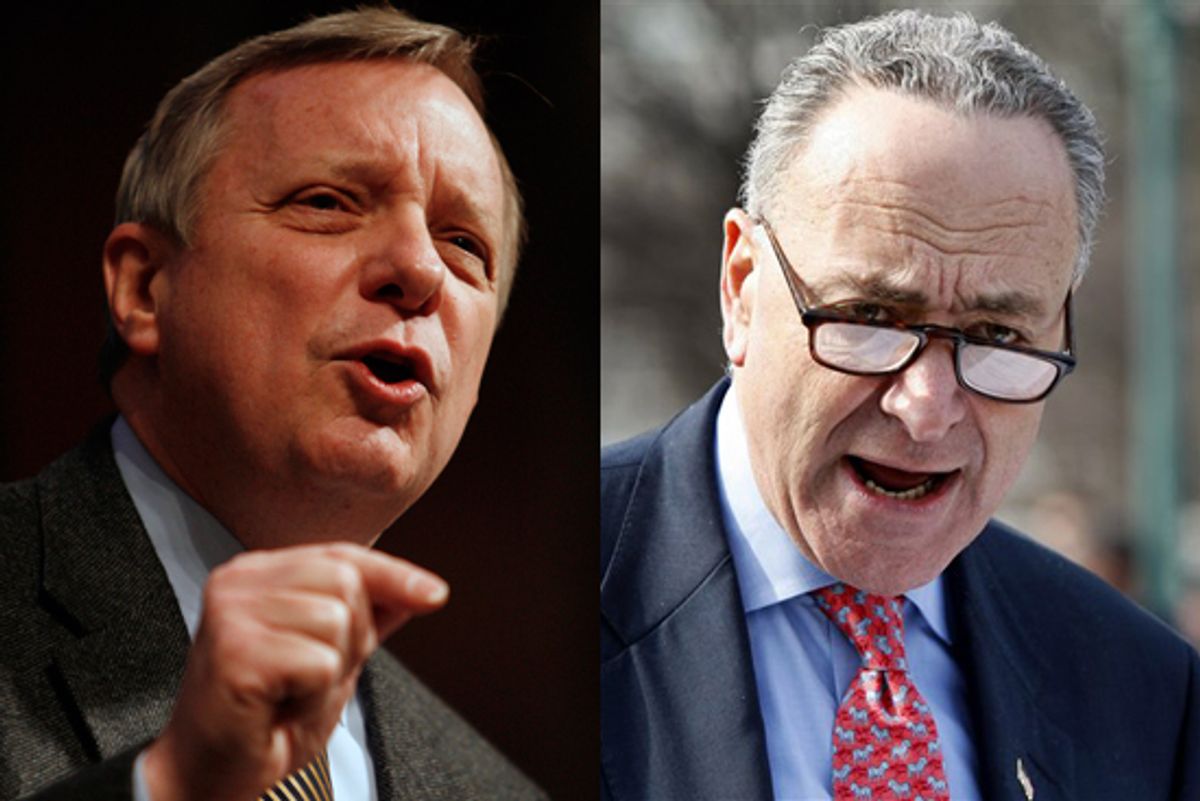 It's tempting to say that the biggest losers on primary night last Tuesday were Chuck Schumer and Dick Durbin.

Their names weren't on a single ballot, but their desire to lead the Senate's Democrats next year is tied to Harry Reid's November fate. If he loses his reelection campaign in Nevada, then his leadership post will open up. But if Reid somehow hangs on, then the race -- presumably -- will be off.

For months, it was assumed that Reid would go down to defeat. He's had close calls in Nevada before, but never has the climate been as poisonous for him as it is now. When he fell behind his prospective Republican opponents by sizable margins earlier this year, his fate seemed sealed. Through all of this, of course, Schumer and Durbin professed utter and absolute confidence in Reid's reelection prospects -- even as they privately took steps to shore up their support within the Democratic ranks.

But this past week brought with it a twist: the victory of Sharron Angle, a far-right Tea Party adherent, in Nevada's Republican primary. Angle's presence potentially gives Reid an opportunity to make the campaign as much a referendum on her as it is on him. And if he can do that, then he'll have a real chance to prevail in November.

So, what do Reid's brighter (or less dim, at least) prospects mean for his would-be successors?

Between now and November, the answer is: not much. Durbin and Schumer will keep proclaiming their faith in Reid's prospects (except now, they might actually mean it) while still taking steps that will, however indirectly, improve their standing with their colleagues.

If Reid does win, he should be able to hang on to his leadership post -- if he still wants it. Democrats would very likely still be the majority party in the Senate (a GOP takeover is hard to fathom if they can't knock off Reid) and they would hail his triumph as a powerful rebuke of the GOP's rightward lurch. Senate Democrats would be far more likely to celebrate Reid than to overthrow him under those circumstances.

It's also hard to imagine either Schumer or Durbin trying to foment a revolt. The odds of pulling it off would be long, and the price of failure would be severe. Given that Reid will turn 71 this year (two years younger than Mike Mansfield, the oldest Senate Democratic leader in history, was when he retired in 1977), that's not a risk either man will want to assume. Better to look like a team player while waiting for Reid to step aside -- or to be politely nudged aside -- a few years down the line.

The only question, then, would be whether Reid wants to continue as leader, and it's safe to assume that he would. After all, pundits and (privately) members of his own party spent the last year calling him a goner. His survival story wouldn't be complete unless he is leading the Senate's Democrats when the 112th Congress convenes.

Still, the clock would be ticking for Reid, who has been the Senate's Democratic leader since 2004. Other leaders have served longer; Mansfield lasted 16 years, while Reid's predecessor, Tom Daschle, made it through 10 (and was only ousted because he lost his '04 reelection bid in South Dakota). But, given the modern demand for television-friendly party leadership, Reid's advancing age figures to become an issue in the years ahead. Even if he's elected to another six-year term from Nevada this fall, his fellow Democratic senators may start itching for a new public face somewhere in the middle of it.

There is a something of a precedent for this. Back in 1988, Majority Leader Robert Byrd fell victim to a polite coup, even though he'd led the party back to majority status in the 1986 midterm elections. Byrd had been the leader since 1977 (when he replaced Mansfield), surviving two challenges (from Florida's Lawton Chiles in 1984 and Louisiana's J. Bennett Johnston in '86) in that time. With each passing year, though, desire for fresh leadership among Democrats only grew. By '88, the 70-year-old Byrd, no longer certain he could beat back a challenge, opted to step down and to assume the chairmanship of the mighty Appropriations Committee instead.

That set the stage for a three-way contest between Johnston, Hawaii's Dan Inouye and Maine's George Mitchell, all of whom had been angling to succeed Byrd for years. Mitchell, relying on support from younger members (many of whom he'd helped elect as the Democratic Senatorial Campaign Committee's chairman in '86), ended up winning.

Something somewhat similar happened in the spring of 1994, when Mitchell announced his plans to retire. On paper, his logical successor was the Senate's No. 2 Democrat, Majority Whip Wendell Ford. But Ford was pushing 70, which provided an opening for the 46-year-old Daschle, who quickly lined up support and intimidated Ford out of the race. (Ford and his friend Byrd nearly got revenge later in the year, twisting arms for Chris Dodd's last-minute campaign against Daschle, which fell one vote short.)

Reid's situation isn't quite the same as Byrd's or Ford's, of course. But their examples point to a reality of politics: Eventually, every leader wears out his (or her) welcome. As Byrd found and Reid stands to discover, a legislative leader's base of support tends to shrink with the years, not expand. Old allies retire, new members -- with their own agendas, their own allegiances, and their own ambitions -- arrive. And would-be successors grow impatient.

Which brings us back to Schumer and Durbin. If Reid prevails in Nevada, they'll have no choice but to suspend their ambitions for another day -- but there's no guarantee that day will ever come. Right now, Schumer and Durbin have the standing to prevent any other Democratic senators from vying for the top slot. But Schumer will turn 60 later this year. Durbin will turn 66 (even if he looks a few years younger). What will they look like to their fellow Democrats two years from now, or more? New prospects could emerge in that time. Bob Menendez's aspirations are obvious, for instance, but it's too soon for him to make a play for the top slot. But if Reid hangs on for another few years, the timing could be right for Menendez -- and for others.

This is especially problematic for Durbin, whose supporters in the caucus tend to be older. As they leave office and are replaced by new faces, Durbin's prospects may flicker out. It's possible that 2010 marks his last best shot at the majority leader's slot.

For Schumer, the stakes probably aren't quite as dire, since he has plenty of support among newer senators (those he recruited and supported in the 2006 and 2008 elections as DSCC chairman). He'd presumably be viable in a 2012 and 2014 majority leader's race. But viable enough to win?

It's hard to escape the conclusion that for Schumer and (especially) Durbin, a Harry Reid win in November would be a bittersweet moment.