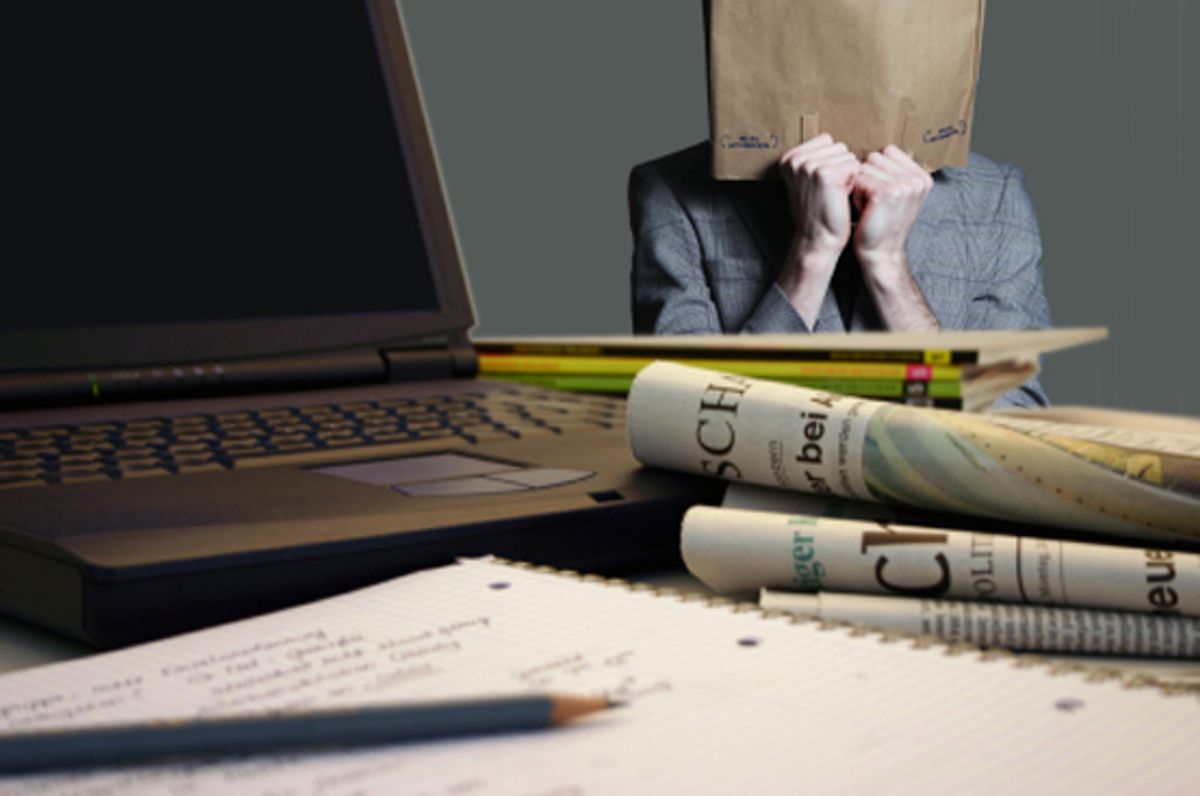 In April, New York Times Public Editor Clark Hoyt published a critique -- not his first -- of the newspaper's flagrant, ongoing misuse of anonymous sources. He wrote, among other things:

Despite written ground rules to the contrary and promises by top editors to do better, The Times continues to use anonymous sources for information available elsewhere on the record. It allows unnamed people to provide quotes of marginal news value and to remain hidden with little real explanation of their motives, their reliability, or the reasons why they must be anonymous.

Yesterday, Washington Post Ombudsman Andrew Alexander published a critique -- not his first -- of the newspaper's flagrant, ongoing misuse of anonymous sources. He wrote, among other things:﻿

The Post's internal policies set a high threshold for granting anonymity. It "should not be done casually or automatically." Further, "merely asking should not be sufficient to become anonymous in our stories." If sources refuse to go on the record, "the reporter should consider seeking the information elsewhere."

But too often it seems The Post grants anonymity at the drop of a hat. ﻿

My mind-reading skills are limited. So I won't try to explain what motivates this behavior by journalists who should know better, apart from urging you to read the half-baked mea culpas Hoyt and Alexander extracted from several editors at their respective organizations.

But I will echo the sentiments that Alexander, Hoyt and other media critics -- especially Slate's Jack Shafer, a relentless hunter of what he aptly calls anonymice -- have expressed repeatedly over the years, and add a few of my own:

Whether the reporters and editors who so casually violate their institutions' rules are simply arrogant and/or lazy, or whether they genuinely believe they're providing information that readers need to know, they're undermining the credibility of their news organizations almost every time they do this. In reality, whether they understand it or not, they betray contempt for their readers, not respect.

As a reader, I've trained myself to treat anonymously sourced stories with the most extreme skepticism. Unless I can infer a truly compelling reason for the anonymity, I now actively disbelieve -- or, at best, assume a sleazy motive on the part of the source -- what I read in these circumstances.

The journalists' serial abuse could stop today, if the top editors at newspapers made it clear that the rules mattered -- and that violations would negatively affect the violators' careers. It's blatantly obvious that these editors have given their tacit approval. Through their inaction, they tell us that rules are for other people, an all too common belief among those who inhabit the top rungs of our political and business worlds. They, much more than the people they supervise, demonstrate the deepest contempt for readers.


A longtime participant in the tech and media worlds, Dan Gillmor is director of the Knight Center for Digital Media Entrepreneurship at Arizona State University's Walter Cronkite School of Journalism & Mass Communication. Follow Dan on Twitter. More about Dan here﻿.