Should nuts be banned on commercial flights?

Switching to an alternate snack should be easy, right? Try telling that to the peanut industry 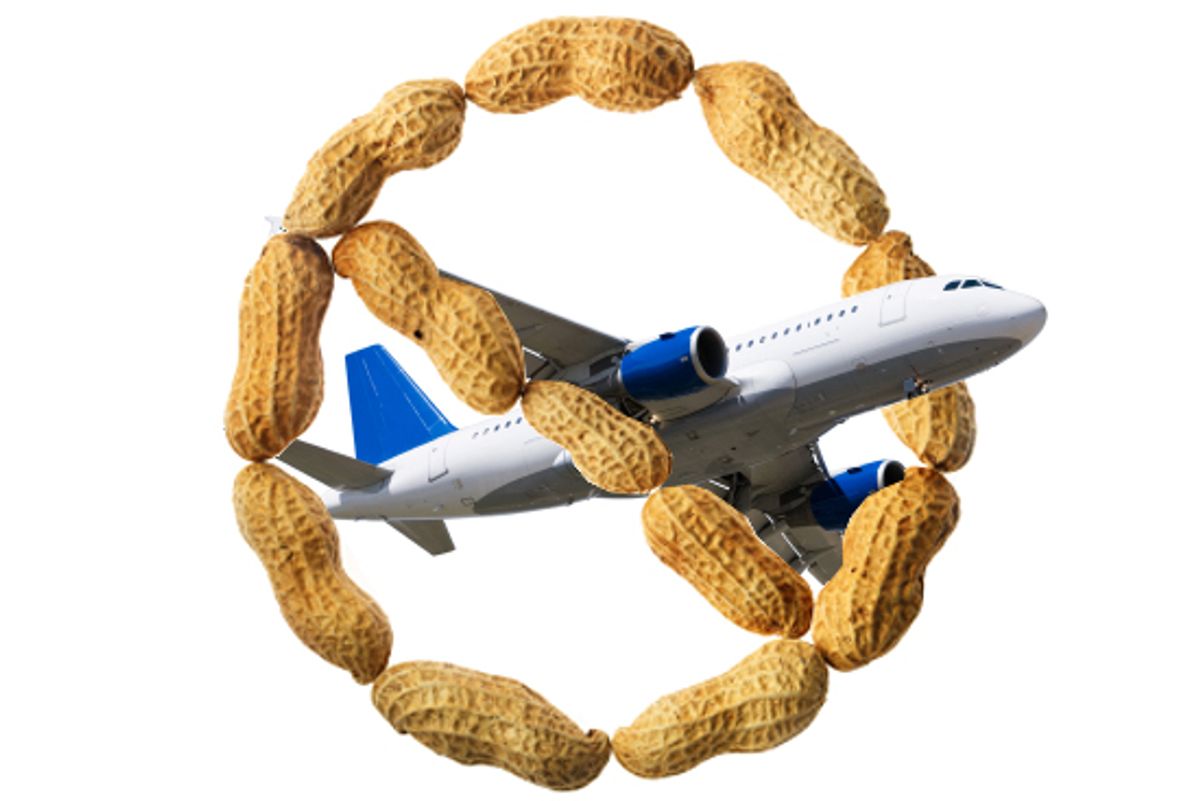 The pilots at Spirit Airlines are on strike. Spirit is a larger carrier than you probably realize, operating a fleet of 30 Airbus A320-series planes from bases in Detroit and Fort Lauderdale throughout the Caribbean and Latin America. The strike is stranding some 17,000 travelers daily.

Spirit bills itself not merely as a low-cost carrier, but an ultra-low-cost carrier. I once called the company "a poor man's Southwest," and it was Spirit that touched off controversy back in April by announcing it would begin charging passengers not only for checked luggage, but carry-on bags as well.

"Spirit Airlines ain't exactly Singapore or Qatar Airways. It ain't even United," I wrote on April 8. "A few weeks ago I found myself in South Florida, at the Spirit Airlines terminal. I have to ask, having been out of the domestic loop for some time: Is this the state of flying in the United States? I'd never experienced anything quite like it. It was like a humanity bomb went off. The lobby was elbow-to-elbow with the ugliest, loudest, most unbearable people I have ever seen -- guys in gold chains screaming at each other; trashy women tottering around on silver high-heels clutching knockoff designer bags; teenagers sleeping on the floor; gigantic suitcases and baby carriages everywhere. The din of crying babies was unbearable..."

That wasn't very nice, I know. And whatever my feelings for Spirit's place in the industry, that doesn't mean I can't, or shouldn't, be supportive of its striking pilots. A 10th-year first officer at Spirit earns as little as $65,000 annually.

But the bigger story in air travel this week ...

Nuts. The government is considering whether or not to restrict, or even ban peanuts from commercial airline flights.

What do I think? I think it's a good idea.

It was never something I thought much about, and was liable to roll my eyes about if asked, until I lived with somebody who, along with 1.8 million other Americans, is severely allergic to most legumes, peanuts in particular, and whose every airplane trip becomes a battle to avoid not only nuts themselves, but their particles and dust.

Not surprisingly, the peanut industry sees it differently. "The peanut is such a great snack and such an American snack," said Martin Kanan, CEO of King Nut, speaking in an Associated Press article. King Nut is the chief supplier of nuts to the U.S. airline industry. "What's next? Is it banning peanuts in ballparks?"

Hm. If you're going to play the slippery slope card, that's a pretty weak hand. Correct me if I'm wrong, but an allergy sufferer has a few more means of escape at his or her disposal in a baseball stadium than in an overbooked 737 at 38,000 feet.

And what's this "American snack" business? I guess allergies are unpatriotic?

The peanut lobby is stronger than you think. In 1998, when the Department of Transportation threatened to impose peanut-free seating zones on planes, Congress threatened to cut its funding! That's just nuts.

All things considered, switching to an alternate snack ought to be an easy decision. Carriers report very few peanut-related emergencies while aloft, but that doesn't mean it can't happen, and diverting a single long-haul flight for a medical emergency can wind up costing hundreds of thousands of dollars. And while I understand that plenty of people enjoy eating peanuts (personally I find them vile, though at least I don't need to worry about anaphylactic shock), I can't imagine that many people enjoy them so much that a switch to pretzels or some other product is going to disappoint customers.

Besides, peanuts fall everywhere and make a mess on the floor.