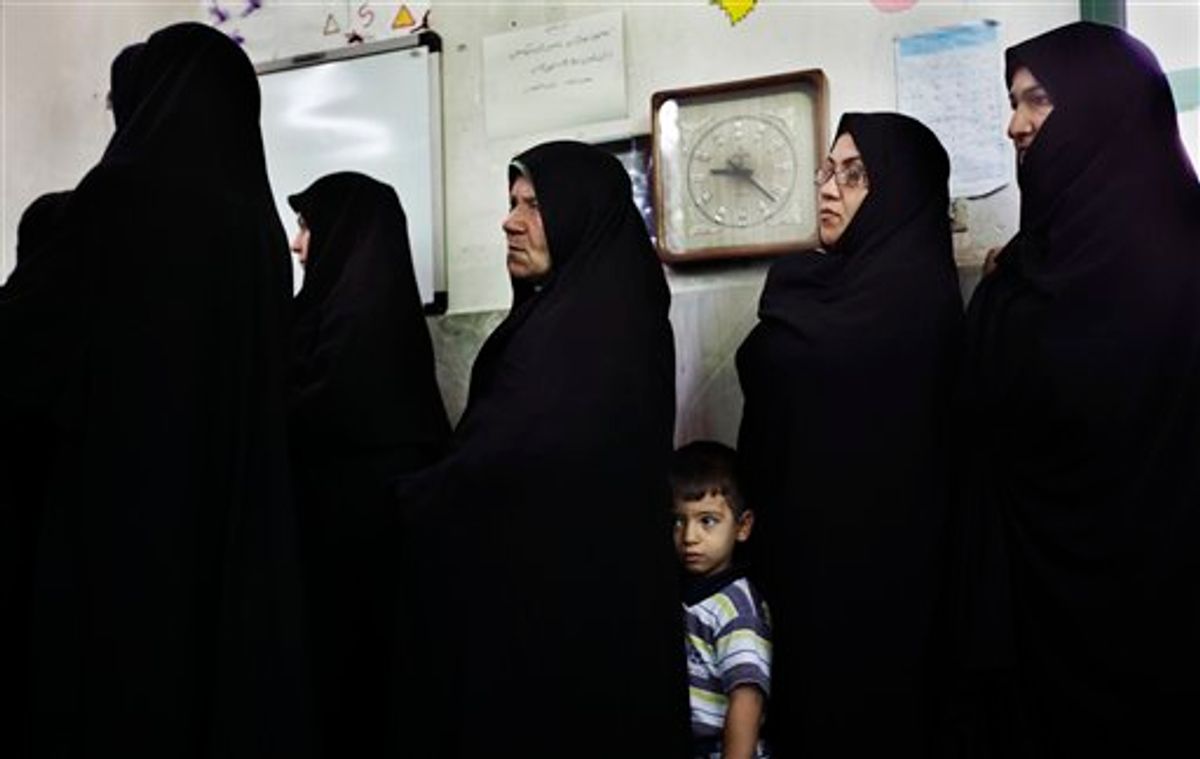 FILE - In this June 12, 2009 file photo, a young boy stands with a relative as she and others queue to cast their votes in the Iranian presidential elections at the Ershad mosque, on the outskirts of Tehran, Iran. Friday marks the first anniversary of the disputed re-election of President Mahmoud Ahmadinejad. (AP Photo/Ben Curtis, File) (AP)
--

Ah, summertime in Iran: The sun blazes, that Fresh Prince jam goes into heavy rotation -- and police and militiamen start cracking down on un-Islamic dress. Just as this year's campaign ramps up, the AFP reports that 71 women have been detained over the past couple months for being "improperly dressed" while attempting to board planes. (If the religious police are going to let sartorial rules slide for anyone, you would think it would be for improperly dressed women who are leaving town, right? But the logic behind the dress code isn't so straightforwardly practical.)

"Police or hardline militiamen" are also "stopping luxury cars to question boys and girls on board about their relationship," according to the AFP, and drivers who harass women on the street have had their cars confiscated by police. Believe it or not, President Mahmoud Ahmadinejad claims he has nothing to do with this crackdown: "I am strongly against such actions. It is impossible for such actions to be successful," he said, following this weekend's protests marking the anniversary of last year's controversial election. "The government is not interfering in this. We consider it is insulting to ask a boy and girl about their relationship. Nobody has the right to ask people such a question."

And yet -- and yet! -- the government has put $1.5 billion toward promoting "moral conduct," particularly through the enforcement of women's dress (which, we recently learned, can prevent earthquakes). Summer just began and, from the looks of things, it's gonna be a looong one.