OK, it's a hit -- but does the new "Kid" feature feathered hair, shoulder pads, Ralph Macchio or Bananarama? 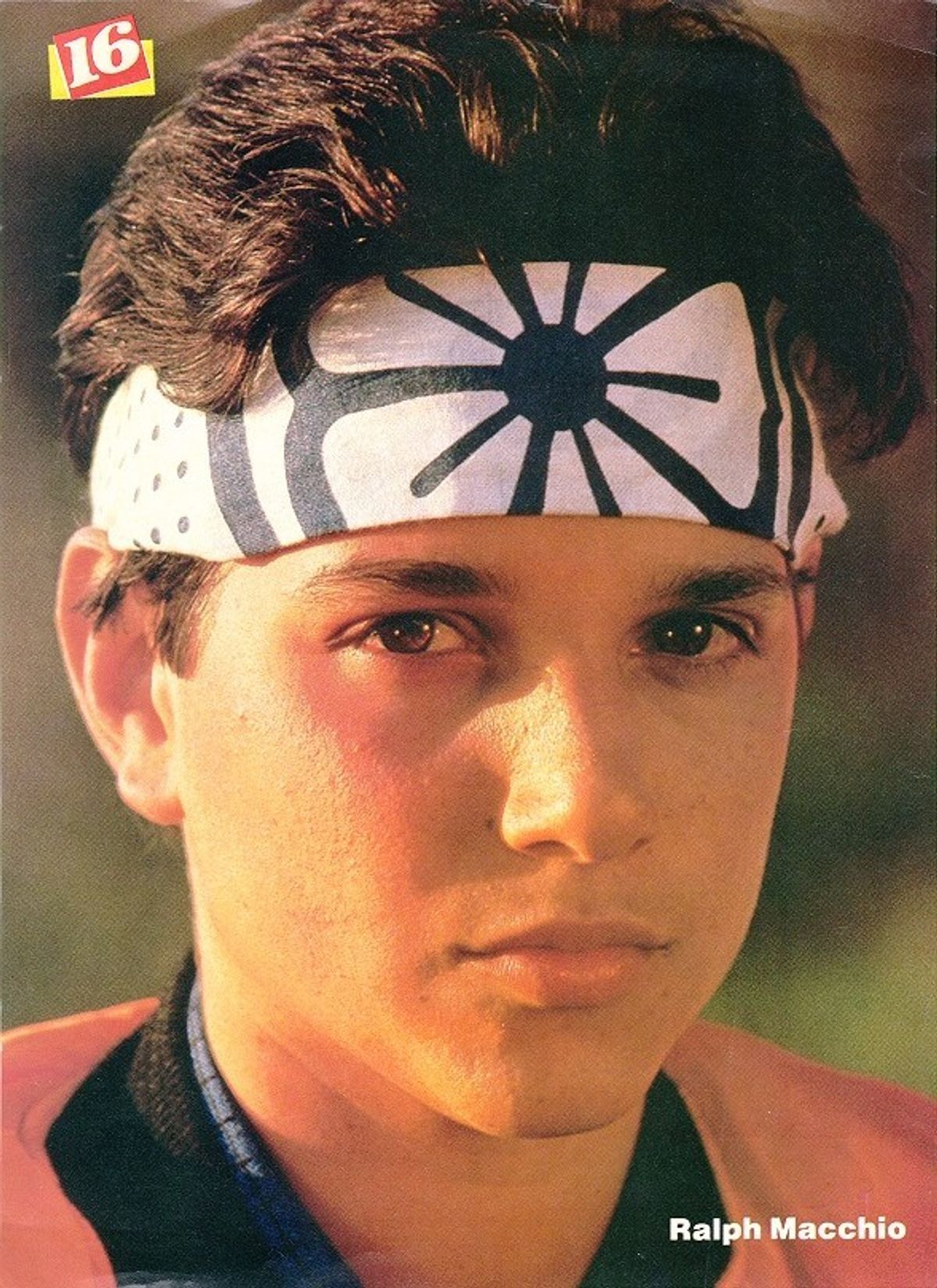 "Hey, it's the 80s," says Daniel Larusso, aka Daniel-san (Ralph Macchio), as he hands his car keys to his girlfriend Ali (Elizabeth Shue) in the original 1984 version of "The Karate Kid." And it is the '80s, all right. Daniel-san wears a headband throughout the last half of the movie, his mom is nearly crushed under the burden of enormous shoulder pads and even the evil sensei has feathered hair. When you add a soundtrack populated with cuts by Survivor, Bananarama and Gang of Four (!), you've got a real time-capsule movie on your hands. You can cram "The Karate Kid" into an indestructible canister along with beta tapes of "Top Gun," "The Breakfast Club" and a couple of episodes of "The A-Team" and just wait for civilization to end, knowing that future generations will get what the '80s were all about (providing they can find a working Sony Betamax).

John G. Avildsen was always a director who could capture the moment more than he could shape it, and "The Karate Kid" is hardly his first movie worthy of inclusion in a time capsule. Avildsen's "Joe" (1970), with Peter Boyle as a tool-and-die worker from Queens who wants to kill hippies, was released only two months after 200 pro-Vietnam War construction workers beat the living crap out of protesters on Wall Street. While Avildsen offered "Joe" as a dark satire of American working-class attitudes of the time, the hard-hats (as they came to be known) and those who agreed with their hippie ass-kicking embraced the movie. According to Rick Perlstein's book "Nixonland," a little old lady in a Manhattan butcher shop praised Boyle upon meeting him -- not for his performance in "Joe" but for the stream of racist bile that came out of his title character's mouth.

"I agree with everything you said, young man. Somebody should have said it a long time ago," the lady reportedly told the dismayed actor.

The next Avildsen movie to attain time-capsule status is the 1976 "Rocky" (and since you insist, there's a Blu-ray collection available for that series too). From a script by star Sylvester Stallone, the triumphal film is almost payback to the clueless hard-hats that helped make "Joe" a success. (With a budget of just over $100,000, "Joe" took in nearly $20 million.) Rocky Balboa represents Nixon's silent majority as much as Joe does, but without the homicidal urges. Where Joe tries to stem the tide of multiculturalism by plugging hippies, Rocky attempts the same in the boxing ring. Rocky's cinematic opponent, Apollo Creed, is an obvious stand-in for Muhammad Ali, the champ who became a protest movement icon by rejecting the Vietnam War and Jesus Christ in one fell swoop. In the end of the film (not the franchise), "Rocky" comes up short in his bout with Creed, but earns the "peace with honor" that eluded Nixon and America in Vietnam.

By the time we get to "The Karate Kid," multiculturalism is a fait accompli despite Nixon and Reagan's best efforts to take America back to an idealized version of the paranoid 1950s. Conservatism may have been on the rise in the '80s, but American audiences were swept away by Pat Morita's portrayal of Mister Miyagi, a character who espouses nonviolence and Eastern medicine and would have been revered by the hippies in "Joe." The hard hat is no longer our tragic hero this time around, but the film's villain: Sensei John Kreese (Martin Kove) of the dreaded Cobra Kai dojo. Kove's portrayal of Kreese, a Vietnam vet who hasn't reconciled with losing that war, is a forerunner to Tom Berenger's Sgt. Barnes in "Platoon" two years later. Where Miyagi learned that "fighting doesn't solve anything" from his experiences battling the Germans in World War II, Kreese instructs his students that "mercy is for the weak."

Daniel-san is a more optimistic Avildsen protagonist than his predecessors, more by virtue of his youth than via any of Reagan's "Morning in America" hyperbole. Where Joe and Rocky make their futile stands against the encroachment of multiculturalism, Daniel-san embraces it and learns "wax on/wax off" and that iconic crane technique, which "if do right, no can defense." And multiculturalism works both ways as Miyagi himself exudes some Asian stereotypes while rejecting others. His belt is not a karate black belt but a canvas one from J.C. Penney, and he keeps his collection of classic American cars along with his bonsai trees. Miyagi doesn't consider himself Japanese but Okinawan, adding an extra nuance to the character that almost makes up for all the pidgin English. Despite Miyagi's refusal to use pronouns (endearing then, grating now), he's a colossal step up from John Hughes' Long Duk Dong in "Sixteen Candles," the other teen movie portrayal of Asians in 1984.

Like "Joe" and "Rocky" before it, "The Karate Kid" profited from Avildsen's knack for turning blue-collar movies with budgets as modest as their subject matter into box-office heavyweights. Costing just $8 million to produce, the movie earned over $90 million, making it the fifth-highest-grossing film of 1984. Only "Beverly Hills Cop," "Ghostbusters" and two films from the house of Spielberg ("Indiana Jones and the Temple of Doom" and "Gremlins") were able to top it. Where Avildsen, Morita and Macchio's return in "The Karate Kid, Part II" (1986) was even more successful than its predecessor (earning $115 million), the initial "Karate Kid" was the last Avildsen film worthy of that apocryphal time capsule. His apartheid/boxing drama "The Power of One" (1992) and "Lean on Me" (1990), where Morgan Freeman plays a baseball bat-wielding high school principal, were the kind of calculated feel-good fare used by schoolteachers to inspire bored students on rainy days for a few years after their release before being forgotten altogether. According to IMDB, Avildsen currently has a film called "Stano" in pre-production.

To herald the release of the "The Karate Kid" remake, in which Jackie Chan teaches Jaden Smith Chinese kung fu (despite the film's title), Sony has released the first two "Karate Kid" movies in a new Blu-ray collector's edition. The first film holds up even to my fond memories of seeing it at the Redwood City Drive-In when I was a teenager, but Daniel-san loses some of his charms in "Part II." In the first movie, he's the underdog who defeats the rich kid Cobra Kais and gets the girl against impossible odds. By the second film, Daniel's girlfriend and his New Jersey mom are both seen only in flashbacks and explained away in expository dialogue. For that other series spawned by an Avildsen fight film, Stallone knew that Rocky had to remain faithful to Adrian unto death for his brawler to maintain audience sympathies through five sequels. However, when Daniel-san romances the gorgeous Tamlyn Tomita and defeats Okinawan gangsters in "Part 2," he's no longer an underdog but a stud, and a whiny one at that.

The Blu-ray of the first movie includes several making-of features and a rollicking commentary track with Avildsen, scriptwriter Robert Mark Kamen, Macchio and Morita that is carried over from the 2004 DVD release. While nothing is new in this release save for the 1080-pixel resolution and "Blu-pop" (a Blu-ray feature where trivia and interviews pop up during the movie), the 2004 supplemental material is preferable to anything newer due to the inclusion of Morita, who passed away in 2005. The "Part II" disc only includes Blu-pop and a six-minute making-of featurette titled "The Sequel." Not included in this set are "The Karate Kid, Part III" (1989) where Sensei Kove returns to bring Daniel to the dark side, or "The Next Karate Kid" (1994), where Macchio is replaced by future "Million Dollar Baby" Hilary Swank.

The new, Jackie Chan-enhanced "Karate Kid" did tremendous box office on opening weekend, but only time will tell if it's time capsule-worthy or even an enjoyable piece of future retro-kitsch. But by leaving the dusty San Fernando Valley 'burbs of Reseda and Encino behind for China itself, the new movie shows that multiculturalism is now more a part of American society than in the time of Daniel-san and Mr. Miyagi, let alone Joe. Where Daniel-san gets sand kicked in his face on L.A. beaches, Jaden Smith's character has to come of age against a backdrop supplied by the Great Wall and Forbidden City during a time when America's wars on the Asian continent (as well as her summer blockbusters) are funded by loans from the Middle Kingdom. However, while multiculturalism is more ingrained in us, American wrong-headedness still creeps in. Calling this new movie "The Karate Kid" (after a Japanese fighting style) instead of the more accurate "Kung Fu Kid" is the kind of blunder I'd expect from producers looking to re-launch Long Duk Dong, not Mr. Miyagi.