And you're not invited! 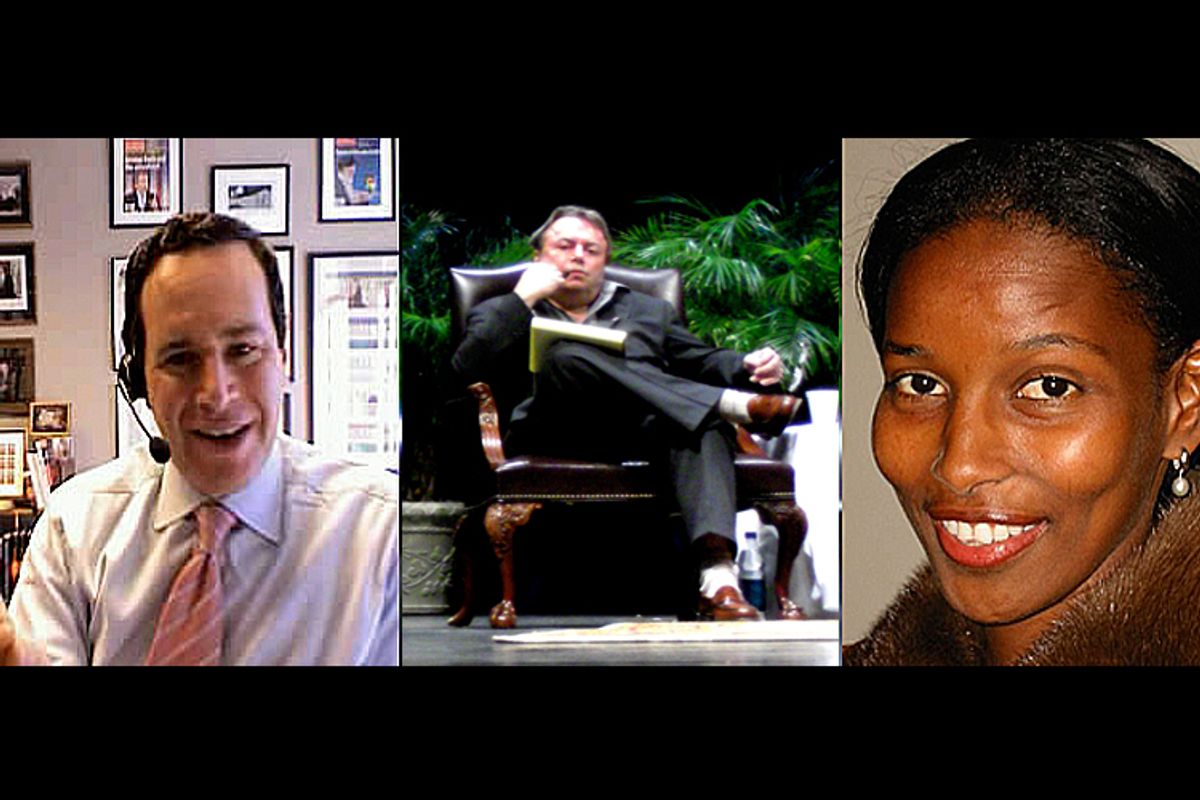 You are not invited
--

Bashing Beltway cocktail parties always feels like a cheap shot. Do these things even actually happen? Surely, powerful people must have non-powerful friends to hang out with, instead of just hobnobbing with each other.

Then the New York Times goes and runs an urgent dispatch from "a tiki-lantern-lighted backyard garden in northwest Washington." This breathless report on a fancy Washington social gathering may have appeared under the heading "The State of Conservatism," but make no mistake, it’s grade-A, uncut Style-section writing: blissfully dazzled by the bright stars, their banter, outfits, food and drink. (Poached tilefish and grilled asparagus!)

The party was in honor of Ayaan Hirsi Ali, the refugee writer from Somalia, by way of Holland, who has been happily appropriated by the neoconservative right because of her hostility to the religion of her upbringing, Islam. Although she identifies as a pro-choice atheist, Hirsi Ali is a heroic figure to the clash-of-civilizations set for her militant embrace of the values of the Enlightenment. She's a foreigner who's renounced the dark ways of her homeland, and loudly declared the superiority of Western culture, at no small personal risk.

Hirsi Ali, it should be said, has lived an amazing life. It's no small thing to escape from an oppressive and backward environment and reinvent oneself as a crusading feminist. And her feminist critique of religion is fairly devastating, though she is under no circumstances willing to apply it to Western life as well as Islam. Despite her valid complaint with the oppressive aspects of Islam, there's a distinct note of contempt in her work for the people of the Islamic world in general, and a refusal to acknowledge any shortcomings of Western liberalism. And this seems to be why the neoconservative, bombs-away crowd adores her. (As Glenn Greenwald points out, the tight embrace between the people who claim to care the most about oppression in the Islamic world and the people who are most eager to drop heavy-duty ordnance on Muslims is an amazing thing.)

It’s significant that the party for Hirsi Ali was thrown by David Frum and Danielle Crittenden Frum. David Frum, of course, is the former Bush administration speechwriter who coined the phrase "Axis of Evil." More recently, he’s been banished from the conservative movement and deprived of his position at the American Enterprise Institute -- now Hirsi Ali’s home base -- because of his agitation for the GOP to move to the center. Frum has been consistently hostile to Sarah Palin, Rush Limbaugh and the Tea Parties. The final straw, however, came when he described the passage of the healthcare reform bill as the Republicans' "Waterloo."

Other notables in attendance included Christopher Hitchens, the former Nation columnist and ex-Trotskyite who became a cheerleader for military adventures in the Middle East, seeing them as wars against the benighted devout who are Hirsi Ali's bugbear as well. Kathleen Parker was there too. To jog your memory, Parker is the Washington Post conservative who made an impression during the 2008 election by calling Palin "out of her league" and denouncing the GOP’s "oogedy-boogedy" religious wing. The academic critic of feminism Christina Hoff Sommers was there too. Says Sommers, "But I’m a feminist, just a moderate one!" The list goes on like this, but I'll spare you.

This party, in other words, was for people who’ve been expelled from their own parties, or chosen to quit them. Everyone in attendance seems to have found a place as an exile from some ostensibly insane tribe -- overzealous feminists, or leftists, or Islamists, or conservatives.

In holding themselves up as the lonely models of sanity, Hirsi Ali, Hitchens, Frum and the rest have built whole lives and careers around ignoring and belittling the legitimate aspirations of the movements they've abandoned. Rather than formulate thoughtful, nuanced dissent, in each case, these people have turned themselves into foils, and their former ideological homes into ridiculous caricatures.

Like it or not, for example, the reinvigorated GOP right wing is a complicated phenomenon that has deep historical roots and is in a kind of quiet class struggle with the party’s corporate elite. That doesn’t mean we need to do what the Tea Party says, but the way Kathleen Parker wrote them off as the "oogedy-boogedy" faction elucidates the enormous condescension for the grass roots of Beltway "dissenters" who populated the cocktail party.

The Times reports an exchange between Hitchens, Sommers and Hirsi Ali that makes the point perfectly.

The conversation turned to Iran. "Look at the way the left stood up to South Africa. Where are the feminists when it comes to the situation for women in Iran?" Ms. Sommers said. "Liberal intellectuals are more offended by Islamophobia than they are by sharia," or Islamic law, Mr. Hitchens offered.

I'm glad to be taking lectures on feminism from the man who thinks women are congenitally unfunny and suggested that his mother killed herself because she was going through menopause and losing her looks.

Then there's Hirsi Ali herself. The Times quotes a speech she gave in Madison, Wis., earlier this year. "Some people find my views controversial. They argue that I should be silenced."

Some people, of course, do think Hirsi Ali should be silenced. But it’s not the same group that merely finds her "controversial." This is the extraordinary narcissism of people who think that they personally embody political principle. Either you're at the party, or you’re part of the unthinking hordes. With that much smug superiority gathered in one backyard, I'm surprised they needed tiki torches at all. My impression was that the sun shines only for these people.