NYT mag piles on the "Single Ladies" dancers. Can we stop yelling at young women to put their clothes back on? 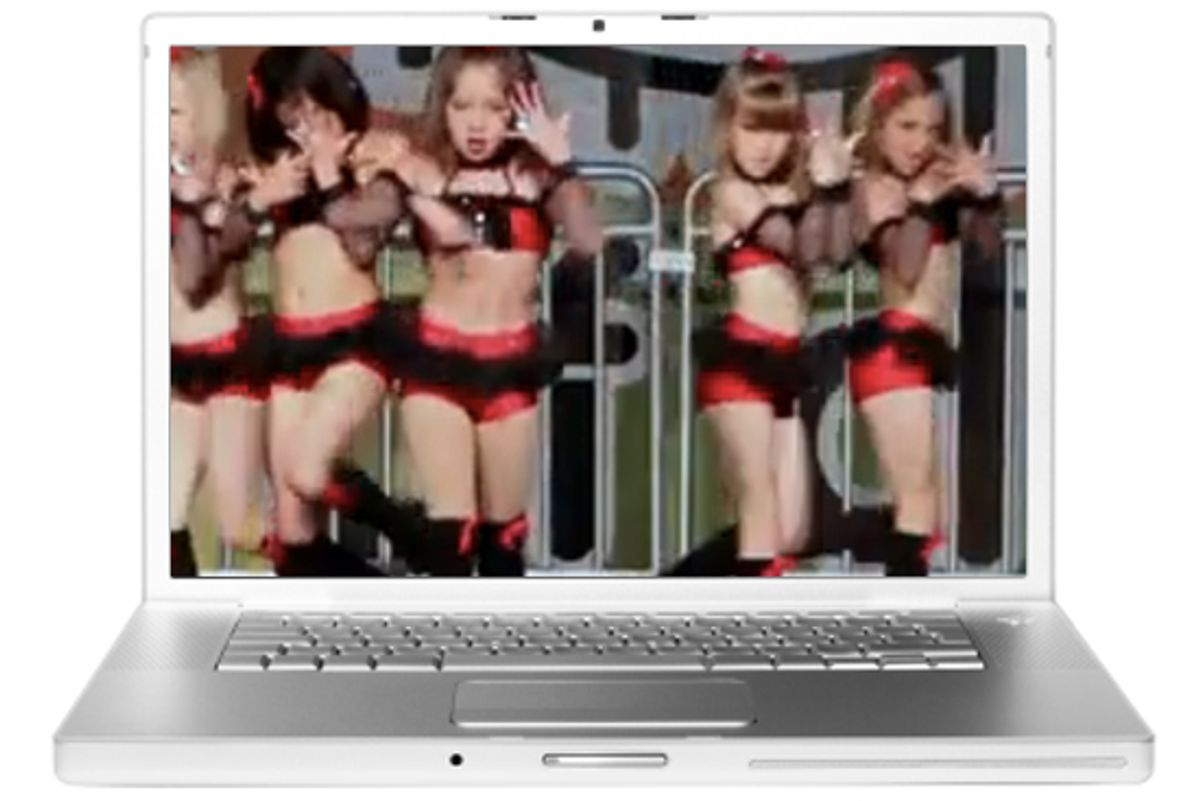 Stop me if you've heard this one before: Five 8- and 9-year-old girls wearing two-piece dancewear gyrate to a pop song for a World of Dance competition. Someone puts it up on YouTube ...

And, that's right, Op-Ed writers across America get 1,000 words out of it about the death of civilization, feminism and childhood. Commenters insist the girls' parents should have their kids taken away from them. Said parents are trotted out for ritual humiliation on "Good Morning America." And so, yet another "What's to become of this generation?" outrage-a-thon is perpetrated.

When the hip-shaking-children scandal broke, I tried to muster some righteous indignation. I said to a dancer friend, "I guess those costumes are kind of trashy?"

"Those girls are great dancers!" he insisted. "Those are standard dance outfits! You can't dance like that in a tent!"

And so was quashed the only real qualm I had. Minus the shock of those ridiculous costumes (further Web surfing confirms they are standard dance competition wear), the video just didn't bother me.

But you know what did? The coverage: all those smug puns about "booties." The 19th-century-esque pleas for temperance. "Can't we just let little girls be little girls?" wailed nearly every commentator. No, really, almost every article contained that line.

Then on Sunday, Peggy Orenstein grabbed that dead horse and throttled it with "Playing at Sexy" in the New York Times magazine. She rehashes the video and its offenses, then cites it, alongside teen sexting and some upcoming Mattel dolls that are part of a "Monster High" collection, as evidence that tween girls are hypersexualized, that teen girls are dissociated from their bodies and so will forever be incapable of enjoying sex, and that all girls, everywhere, should put on some decent clothes and stop all that vulgar thrusting.

That column had every trope familiar to this discussion: grudging admission that "the girls were spectacular dancers"; the bikini slam (their clothes "would make a stripper blush"); even the requisite over-dramatic analogy (the dance was "a 12-car pileup of early sexualization").

And that did it. I am now officially furious on behalf of these dance competition girls. Here's what's wrong with the argument that these kids are horsemen of a sexual apocalypse:

"Moral panics about pornified girls bubble up regularly these days," Orenstein writes. These days? As opposed to the halcyon days of ... never? In every era, there are moral panics about girls; they all project the same tone of hysteria and the same cultural amnesia.

As the sociologist Mike Males has illustrated, particularly in a couple of fantastic Op-Eds for the Los Angeles Times, "for adults, today's kids are always 'the worst.'" Even our hallowed grandparents! "Back then, they were not called the 'greatest generation,'" Males writes, "but a new and frightening 'lost generation.' To look at the 1930s press, scholarly assessments, and official declarations, never had young people been so violent, mentally disarrayed, drugged, lazy, promiscuous, criminal, and hopeless."

Orenstein writes of a magical time coming of age in the '70s when "Young women felt an imperative, a political duty, to understand their desire and responses, to explore their own pleasure, to recognize sexuality as something rising from within. And young men -- at least some of them -- seemed eager to take the journey with us, to rewrite the rules of masculinity so they would prize mutuality over conquest."

I asked a friend of mine if that was true, and I was just born 10 years too late for this glorious sexual epoch. "I think I'm around the same age as her," my friend said, "and I don't know what planet she was on.

Why are there no Op-Eds when black girls dress or dance this way? If the problem is really with girls wearing these outfits, or dancing in this manner, why is it that the hundreds of YouTube videos of black 8- and 9-year-old girls doing their best "Single Ladies" (I just watched a bunch, some from dance competitions and some to the very same song) aren't cause for alarm? Why aren't their parents called to the carpet on morning television? Are they not relevant to the discussion for some reason I don't understand?

And I'm no cultural studies expert, but the indignation over how (white) kids today like to dance (too much gyrating!) sounds an awful lot like the outrage over the effect "black music" had on white America in the 1950s. There is a lot of fear in the discussion of these dance competition girls: fear of sexuality, sure, but also, I think, fear of how diverse pop culture has become.

It doesn't give the dancers their due.

When I interviewed the co-choreographer of the "Single Ladies" dance, JaQuel Knight, for Time.com about the fact that babies and toddlers seemed to love the Beyoncé video, he said about the video's inspiration, "We often went back to our childhood days, when our parents would ask us to dance for all the relatives at the family cookout. They weren't the best steps on the planet, but the feeling, emotion and passion of the steps in that moment were incredible."

So let's break this scandal down: This is girls playing at adults who are playing at being kids playing at being adults. These girls are enjoying the music and the moves. Why is it that we never talk about their talent or their achievements, only about how they look, whether it's to praise them or to decry them?

It ignores all the good news.

You don't need to look past the Billboard Hot 100 to see a ton of great role models for women. Three of the most powerful people in music -- Beyoncé, Lady Gaga and Taylor Swift -- are all women who control their own image, make their own work and do things on their own terms.

I have seen all three in concert in the past year. At every show there were thousands of young women (and some men) celebrating a message of -- yes, that old-fashioned word! -- empowerment.

Beyoncé, with her all-female band, told her fans never to put up with any mistreatment from men. A roar of agreement went up from Madison Square Garden.

Lady Gaga, a Mister Rogers for the "Glee" era, told her fans they're special just the way they are.

Taylor Swift at the Nassau Coliseum in May had those girls whipped up into a frenzy of ambition. She grew furious when acting out a scene about men doing her wrong. Reader, she threw a chair! And behind her was a video showing a silhouette of men over which was written, again and again in red script, THEY SHOULDN'T DO BAD THINGS. "Tay-Tay" is the leading icon for 9-year-old girls right now, and she wears boots with her longer-than-knee-length dresses.

It's a teen girls' world in many ways. As I wrote in the L.A. Times in March, this year's Nickelodeon Kids Choice Awards revealed the dominance of (really good and positive) teen girl culture. Case in point: the mega-hit TV show "iCarly," which is all about adventure, friendship and humor, and -- because this is apparently all that matters -- yes, the girls cover up.

While we're at it, Miley Cyrus did not "strip" for Vanity Fair. All you saw was her back. And she did not "pole-dance." She held on to a pole attached to an ice cream truck while it moved her from one part of the stage to another.

Cyrus' new "I Can't Be Tamed" song and video are not awful because she is acting sexy in them; they're awful because the song is a watered-down version of Britney Spears's "Womanizer."

Those girls in the dance competition are great dancers. But we can't talk about them as dancers, because all we can see are their bodies and their clothes. And isn't that what we're telling our kids not to do?

But no, we're looking at their bodies and we're seeing evidence that Kids Have Gone Bad. At the tender ages of 8 and 9, these girls are the new Elvis the Pelvis.

Fortunately, just as we now find it hilarious that people tried to shield their children's eyes from the King's hips, I predict all the hysteria around these girls will feel quaint in 20 years.

Of course, when these girls are parents themselves, they will be just as horrified by something their daughters are doing -- hyper-driving their space-cars in foil miniskirts, say.

It's just how we are, how we've always been, and probably always will be with girls: judgmental, scolding and afraid.

And that, not five young girls' choreography, is the real shame.

Ada Calhoun is the author of "Instinctive Parenting: Trusting Ourselves to Raise Good Kids." For more, see adacalhoun.com.