The wrong medicine for a bad economy

In the U.K. tough talk on government spending is threatening to depress growth. Next up, the U.S.? 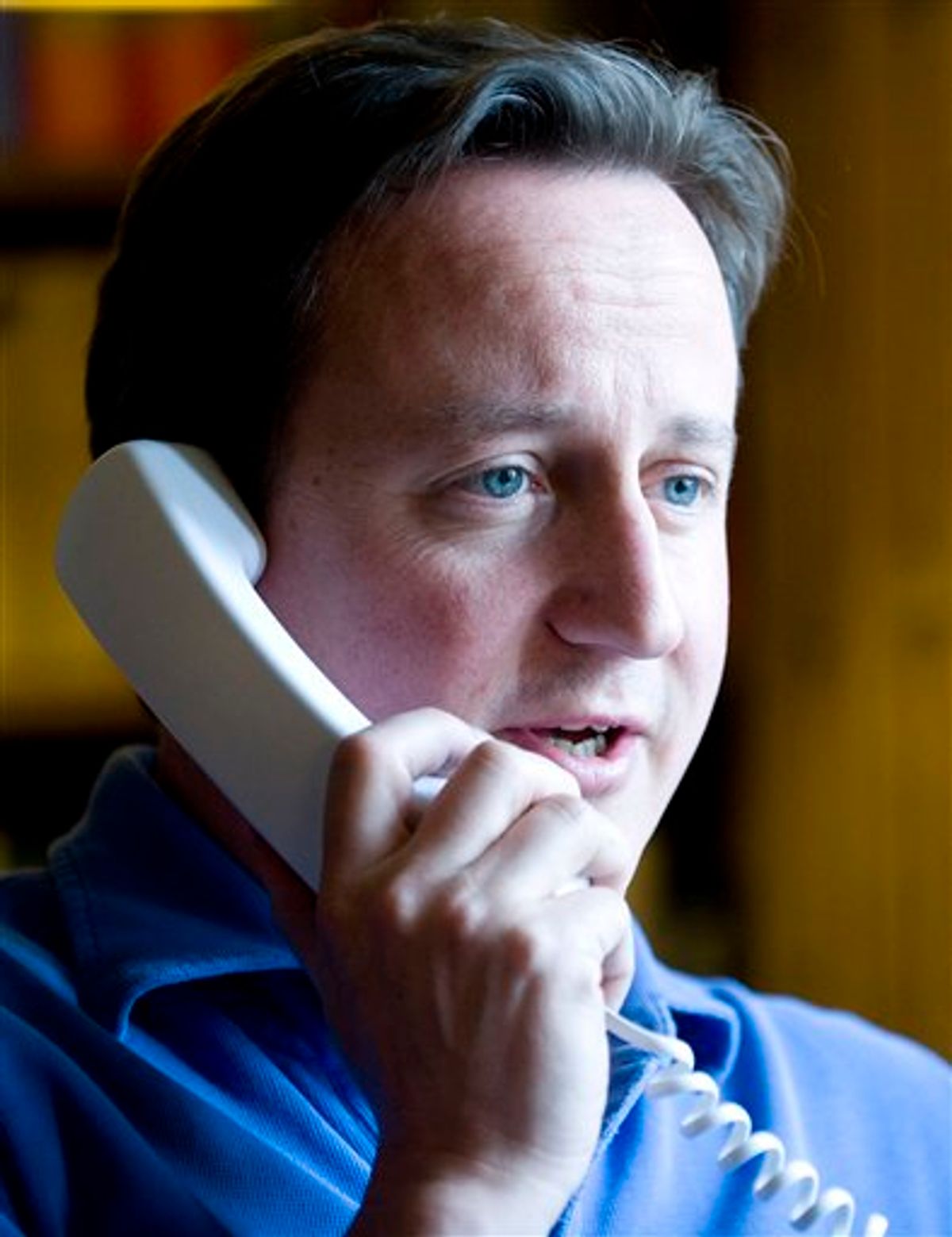 British Prime Minister David Cameron talks to President Obama on the phone in his office at Chequers, England, about the BP situation in the Gulf of Mexico, Saturday June 12, 2010. The leaking oil that has tainted the Gulf of Mexico is also threatening the political shores on both sides of the Atlantic, with a British company the villain. (AP Photo / Andrew Parsons , PA ) ** UNITED KINGDOM OUT NO SALES NO ARCHIVE ** (AP)
--

Brad DeLong points to a BBC article reporting that British business confidence has plummeted precipitously since the new government started talking about severe spending cuts that would be "unavoidably tough."

"The government has understandably been keen to emphasize the extent of the sacrifices that we all will need to make as public borrowing is brought under control," said Peter Hemington, partner with the [accountancy firm BDO.]

"But there is a significant risk that the rhetoric has begun to impact on business confidence, and fears of the economic impact of spending cuts may be causing businesses to rein back on growth plans."

Fiscal austerity, in other words, is not good for "animal spirits." Spending cuts will suck demand out of the UK economy, forcing businesses to cut back their own spending, likely leading to layoffs, which in turn will depress growth even further. There's no mystery here. If the United States similarly attempted to balance its budget on an accelerated time frame, the economic damage would be equally severe. The worst prescription for dealing with high unemployment would be to follow the British example.

But we've been through this argument a million times before, and no matter how many times Paul Krugman or Brad DeLong make the case for additional fiscal stimulus, the battle appears to be lost. President Obama is begging Congressional leaders to pass a $50 billion aid plan for states and local governments, but the votes, in either the House or the Senate, do not appear to be there.

One theory is that Republicans are perfectly happy with high unemployment running through the midterms and all the way to 2012. An angry electorate might end up sweeping the GOP back into power. It is tempting, even if depressing, to wonder what might happen after that. Certainly, we won't get any more stimulus, and further tax cuts would make the deficit even worse. But if the Republicans managed to actually make progress towards balancing the budget by instituting meaningful budget cuts, wouldn't they be running the risk of increasing unemployment even further?

The longer one tries to game out what might happen in the future, the less appetizing it looks. And Obama's hands are beginning to look completely tied. He doesn't have political support for stimulus that could keep the economy growing, but if he buckles into deficit hawk pressure, he could quite easily push the economy back into recession.