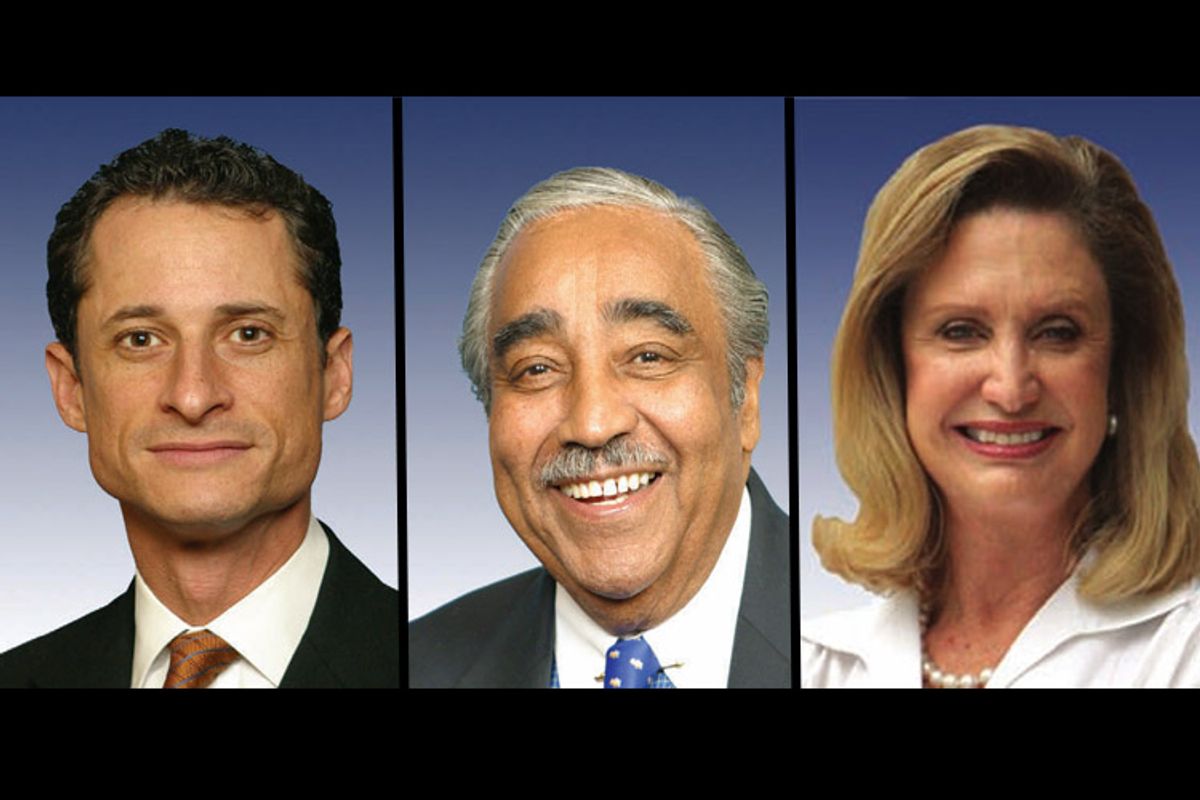 In case you thought a reasonable debate was still possible surrounding Israel's botched raid of a humanitarian flotilla, the Jewish Community Relations Council of New York held a press event in Times Square today to prove you wrong. A half-dozen elected Democrats called on the State Department to ban every flotilla participant from entering the United States.

Well, only some of them called for everyone to be denied visas. Most of them just called for an "investigation" into the terrible terror ties of the activists aboard the flotilla, sponsored by a Turkish NGO called IHH that is not on any American watch list.

But to the assembled politicians and most of the small crowd, it is already settled -- based on decade-old investigations and foreign intelligence reports -- that IHH has ties to al-Qaida and Hamas. (Well, it does have "ties" to Hamas -- anyone looking to build anything in Gaza is forced by the Israeli siege to deal with Hamas.)

So! Here's Carolyn Maloney (at one time a theoretical liberal challenger to Kirsten Gillibrand):

Here's great liberal hope Anthony Weiner, telling the story of a theoretical boat, filled with people who hate America, that takes off from Yemen (not sure why he picked Yemen, but that is where this boat is coming from) and is heading for our shores:

This ship is "heading right toward Queens, or Brooklyn. Let's assume it was coming toward New Jersey or Florida." (What do those American locales have in common, exactly?)

The, uh, obvious counter to this hypothetical is to imagine what our response would be if the ship was headed for Queens but was stopped because it violated, say, Canada's blockade of New York City.

(At 1:29, Weiner's microphone went out. That was the event's highlight.)

Jerry Nadler had an extended bit about how we would respond if New York were under rocket attack -- from New Jersey. But that ended with him actually criticizing the actions of the Israeli government! See, he's mad that it released the activists it detained. If America had captured activists looking to support these mysterious rocket-launching New Jersey terrorists, what would've happened?

"Would we have released them all within a day or two?" Nadler asked. "It's incredible that Israel released all the terrorists -- all the non-terrorists, but also all the people who were wearing bulletproof vests, who had $10,000 in cash in their pockets, and who had apparently done the fighting, and they apparently released them all. They should not have done so, and those people should not be permitted into this country." (Applause.)

Again, Nadler justified the blockade by reminding everyone of the rocket attacks: "Every single one of those rockets is a war crime, because it is a crime to target civilian populations at random." (I'm not sure if Nadler really wants to work from such a broad definition of war crimes.)

Rep. Eliot Engel very simply declared that "the flotilla was out to do no good," attacked the United Nations, accused the president of being "wishy-washy" in his support of every action by the right-wing Israeli government, and finally concluded that "the people who were on that flotilla should not be allowed to come to the United States and spill their propaganda and hatred and terrorist rhetoric."

And Janis Shorenstein, president of the JCRC-NY, had the least self-aware line of the entire event:

"I hold in my hands a petition, signed by 20,000 Americans, who, in an expression of their attachment to the ideals of democracy and tolerance, are demanding a State Department investigation to ensure that those who seek us harm are not allowed entry onto our shores."

I guess denying visas to critics of another country's government is one way to express attachment to the ideal of tolerance.

As I left (sadly unsuccessful in my attempt to ask Rep. Rangel when he'd be chairing the Ways and Means Committee again -- he was hustled away as soon as the event's lone pro-Palestinian activist got near him with a video camera), I caught a snippet of conversation among the members of a Middle American-seeming family of tourists who'd caught the tail end of the event from a half-block away.

Teenage daughter: "I dunno, I think someone attacked Israel, or something?"
Teenage son (after some thought): "No, Israel attacked someone."

If you reverse that, it's a wonderfully succinct summary of the American media conversation on the flotilla attack since it happened two weeks ago.