Hands off that Tony, Scarlett!

Hollywood actresses are ruining Broadway. It's time to take back the stage from the slumming starlets 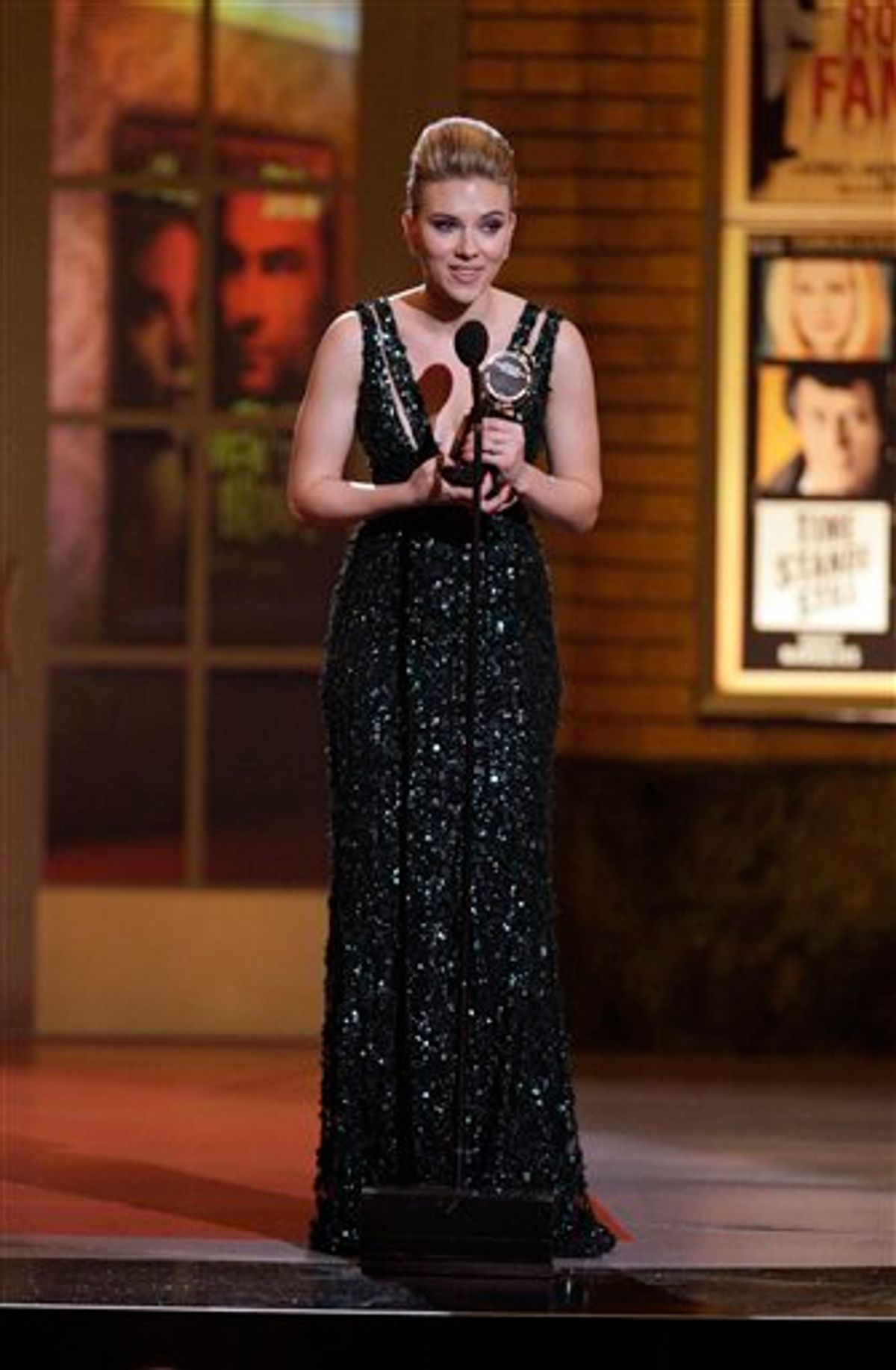 Hollywood actresses need to stay the hell away from the theater. Broadway is no place for them. At last night's Tony awards, Oscar winner Catherine Zeta-Jones won best actress in a musical for her role in "A Little Night Music," while the best featured actress in a play prize went to the plasticine Scarlett Johansson. Those women belong to the world of perfect studio lighting, multiple takes and on-location shoots -- not to the full-throated world of American theater. As a breed, Hollywood actresses gained stardom by compressing their emotions before the pitiless lens, by flattening their affects -- or, in Johansson's case, sliding by on the slight modulation of one facial expression. It's not fair for them to just swoop on to our stage, let down their hair, stamp about and then steal the spotlight from us.

We can no longer tolerate this invasion. We need to reclaim Broadway. By "we" I mean actual true theater girls. The ones who were swooning over Sondheim while other fifth graders were prattling on about boy bands; the ladies who cut their buckteeth on hysterical renditions of "Night, Mother" at theater camp. Bawdy, bold bitches who have been playing to the back of the balcony since they were old enough to emote. We are a special type, never able to politely conceal our emotions. Our common mantra to friends who wanted to go to Halloween parties or the mall was "I can't, I have rehearsal!" We pantomimed, for godsake! We are imbued with the emotional dexterity to understand everything from the unyielding ambition of Lady Macbeth to the plight of a redheaded orphan to the sexual pathos of a Fosse number. And now the community we spent years in sweltering black boxes performing for is elbowing us out for film actresses who want to dip their toes in some theater? Outrageous!

Theater actresses have a special gift that cannot be created by a film actress. Not only are they give full range of their body, but the relationship between an audience and live performance is collaborative and spontaneous. Film actresses are objects in a big shiny machine that can be reproduced in perpetuity while theater actresses give their audiences unrepeatable performances. There are no exotic locations or montages to enhance the theater actress' hold over her audience. The static, fixed position of the audience member means that illusion and empathy rests solely on the actress on stage.

We lot have graciously taken our lumps through the years when shows made the leap to celluloid. Chita Rivera, a short-stacked musical theater dynamo, lost her slot as Anita in the film version "West Side Story" to Rita Moreno. Gwen Verdon, the leggy, red-headed vamp and Fosse veteran was passed over for the movie version of "Sweet Charity" for Shirley Maclaine. Fine, let those broads have the movie house. Such overpowering displays of female personae the likes of Rivera and Verdon belong in front of live crowds. But now, high-wattage Broadway actresses are descending on the stage for their boho adventure in working for scale, like some Hollywood version of studying abroad?

There is no excuse for this kind of disrespect. The birthplace of so much of America's culture has devolved into a showroom of tired old retreads and desperate attempts to cash in on the lower expectations of risk-averse tourists. This collective failure of nerve is snuffing out the dreams of girls belting out "Little Shop" in their teenage bedrooms across America. Why struggle to be a bit player to the Chekhov matriarch when Ashlee Simpson can just put in a call to her publicist and dabble in a bit of theee-tahhh? Broadway, hear our cries! You are draining the marrow of the stage with your reliance on bloodless big-name stars. There is no purer sound than a chorus girl's rendition of "Let me entertain you." Come on, Broadway: Will you have the balls to let her?

Natasha Vargas-Cooper is the author of the upcoming guide to the popular TV show, "Mad Men Unbuttoned."