Athletes and fans are furious about the World Cup's annoying vuvuzelas. But they're also the sound of fandom 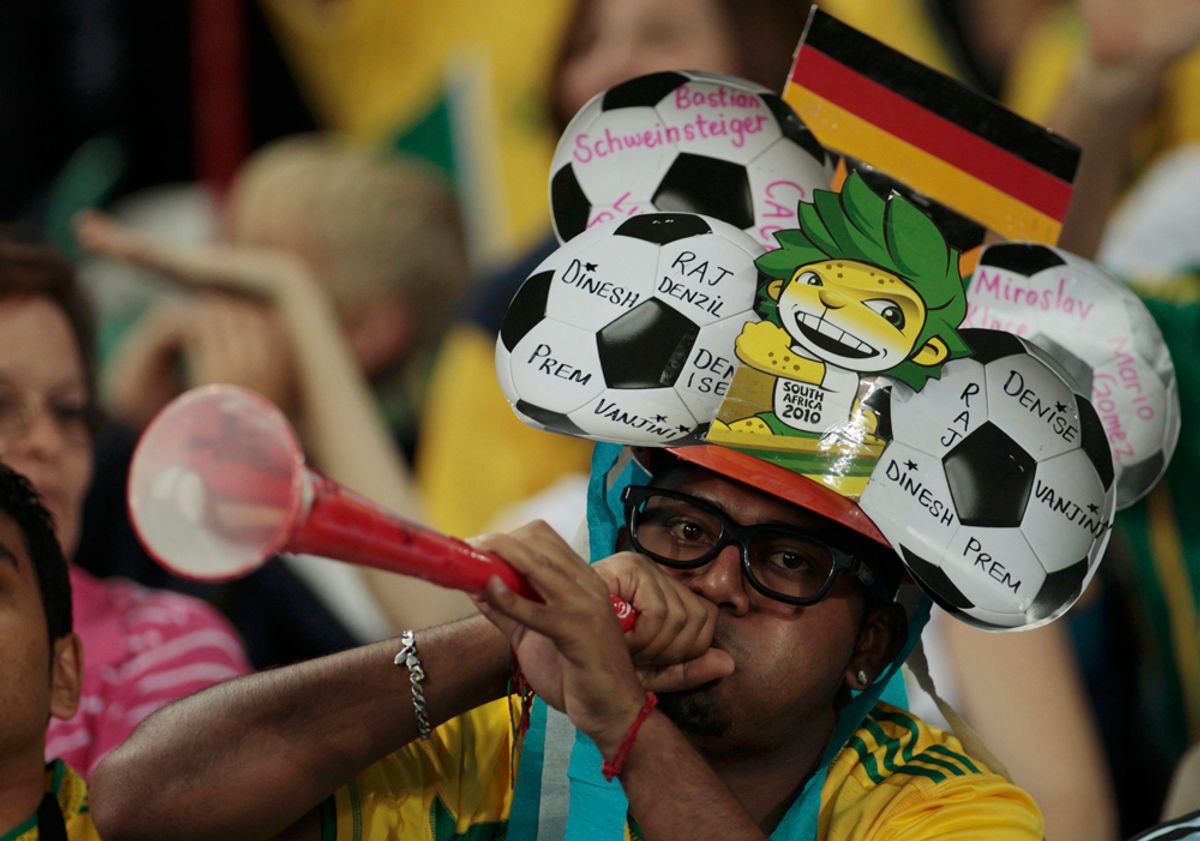 For what it's worth, most of the players seem to hate the vuvuzela, which they claim makes it hard to communicate on the field. The captain of the French side, Patrice Evra, managed to blame the vuvuzela for his team's lethargic effort in their scoreless opener against Uruguay -- a move that struck me as pretty, well, French.

The television commentators are also in a snit. They can't hear themselves talk. They miss the distinct crowd noises you get at soccer matches, such as those wonderful ooohs and ahhhs that accompany a missed shot, or the cleansing roar that follows a goal. They probably also miss the really loud burping.

But as a longtime fan -- of sports in general and the World Cup in particular -- my take on what I'm afraid I must call "the vuvuzela kerfuffle" is pretty conflicted.

On the one hand, the idea of a bunch of Europeans marching into Africa (again) and telling the natives they have to do things the European way (again) strikes me as not just presumptuous, but repellent. On the other hand, the only reason they play soccer in Africa -- and anyone who isn't rooting for the African teams deserves a swift kick in the shin, as far as I'm concerned -- is because a bunch of Europeans marched in and told the natives how to do things.

I do cop to being bummed at the abject monotony of the vuvuzela sound. One of the great pleasures of being a fan, after all, resides in the opportunity to participate in a public, if cacophonous, exercise of free speech. I will grant you that "Yankees Suck" lacks something in the nuance department. But at least the message is getting across.

My favorite moments as a fan are those in which a single voice rises up and makes itself known. When my hapless Golden State Warriors played the Miami Heat several years ago, for instance, I was probably the only Warriors fan in the Miami Arena. As such, I took the opportunity to scream at the top of my lungs whenever there was a lull. Which was pretty often, given how sun-baked most Miami fans are. I wanted the players -- my players -- to know that I was there, and that I had faith in them. And I honestly believe that my vocal support contributed, in some small way, to their victory. Such is the standard psychosis of the devout fan.

So I'd really love it if the fans at this World Cup could speak to their teams -- and to each other -- even in this raw, primal language. As it is, all we get is blaring vuvuzelas, which has been compared to a great many animals, such as bees and locusts and elephants, but which (to me) sounds more like every car alarm in Cape Town going off at once. I'd love to hear the songs of each nation, including the legendary South African anthems. I'd love to hear the musical crescendos and decrescendos that accompany most soccer matches.

But then, on the other hand, I have to admit that I've found that massive drone I complained about earlier to be weirdly compelling. It conveys the basic feeling that huge masses of people are totally fired up.

It's not that I buy this claptrap about the vuvuzela being some kind of indigenous African instrument. For God's sake, one of the main reasons they've propagated so quickly is because a South African company manufactures them. (Funny how these trends always lead us back to the profit motive.)

So maybe it makes sense to think of the Song of the Vuvuzela as a kind of drone of globalization, a modern Tower of Babel. This is what happens when you open the floodgates of fanaticism to the entire world. People are allowed to express themselves, as loudly as they can, for next to nothing.