Why do conservatives want to European-ize America?

Supposedly, the left is in love with Europe. But have you heard of laissez-faire and the Austrian School? 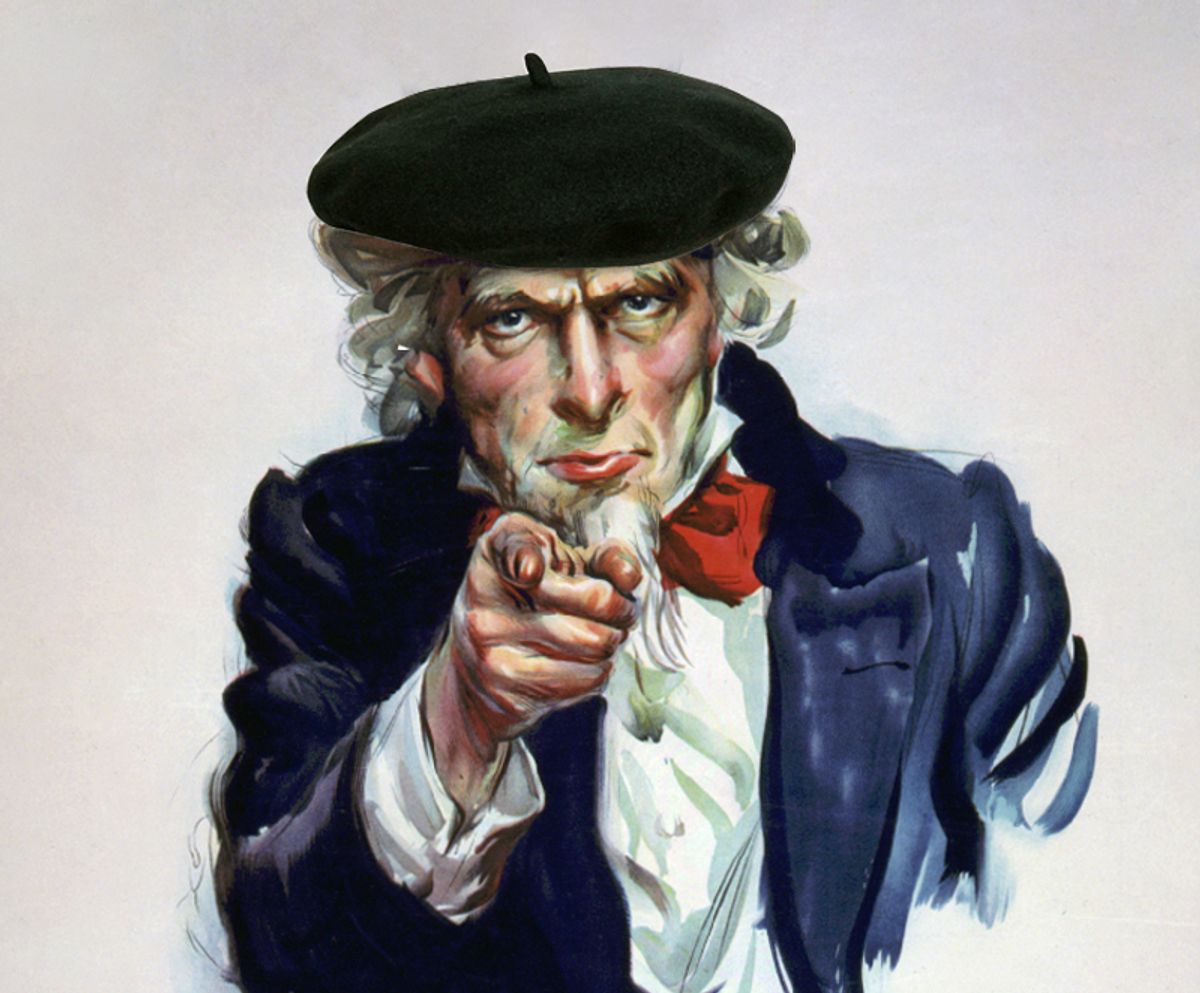 Liberals want to turn America into Europe! This recurrent theme of conservative propaganda is now being promoted by the new president of the American Enterprise Institute (AEI), Arthur C. Brooks. Founded in the 1940s as a small-government libertarian think tank, AEI became associated with neoconservatism in the 1970s and was the home of many proponents of the Iraq war, including David Frum, who was recently forced out for being too critical of the Republican right. Those who suspect that AEI is putting neoconservatism behind it and returning to its free market roots can find evidence in Arthur Brooks' "The Battle: How the Fight Between Free Enterprise and Big Government Will Shape America's Future." In the book, which is endorsed by those internationally respected experts on comparative political economy Dick Cheney and Newt Gingrich, Brooks claims that America is engaged in a new "culture war" between those who favor "European-style statism" and those who favor American-style "free enterprise."

This is not the place for me to address the question of whether American capitalism, having survived the growth of government at all levels in the last century to more than 30 percent of GDP, will suddenly keel over and die if a few more percentage points are added to the government share. And I will only mention in passing one obvious objection to Brooks' premise: There is no single "European model," but several kinds of European models, from the highly redistributionist welfare states of Scandinavia to the corporatist systems of France and Germany, with their employer-based benefits. Instead, I want to focus here on the assumption that American progressives always look to Europe for inspiration while American conservatives are proud intellectual and political nativists.

It is true that many American progressives idealize Europe to a fault. The late Robert Heilbroner said that his model society was "a slightly idealized Sweden." Other liberals seem to take particular features of particular European countries -- French rapid transit, German environmentalism and Swedish social insurance -- in order to create a composite "Europe" that leaves out the aspects of European society that Americans are inclined to find unpleasant, like pushy French shopkeepers, trashy German tabloids and foul-smelling Swedish lutefisk.

But if anything, there are more Europhiles on the American right than on the American left. In every area of public policy -- economics, foreign policy, even art and architecture -- American conservatives worship European intellectuals, most of them long dead, when they are not calling for the U.S. to adopt the ways of particular European societies of yesteryear.

Let's start with economics. Last time I checked, "laissez-faire" was French. In its application to economics, the phrase goes back to the late 17th century, when the French finance minister, Jean-Baptiste Colbert, asked a group of French businessmen how the government could help them and is supposed to have been told, "Laissez-nous faire" ("Leave us alone"). The "let-alone" theory was central to the 18th century economic school of the Physiocrats, led by Francois Quesnay and Anne-Robert-Jacques Turgot. Adam Smith popularized much of their thinking in "The Wealth of Nations," which might as well have been written in French.

Then there is Jean-Baptiste Say, the author of Say’s Law, which claims that "supply produces its own demand." Say is a hero of contemporary conservatives and libertarians, who routinely invoke Say’s Law to claim that Keynes was wrong to believe that there could be such a thing as insufficient aggregate demand. It seems a bit disingenuous for conservatives to attack liberals as Europhiles, when the right is always invoking the authority of Say’s 1803 Traite d’economie politique.

The Europhilia of the American right is not limited to the adherents of French and Austrian economic theories. With the exception of paleo-conservative isolationists like Pat Buchanan, many American conservatives in recent decades have been fans of British imperialism and Prussian military doctrine. Before he finally and forever destroyed his reputation as an intellectual with his comments on the economic crisis, the overrated British pundit-historian Niall Ferguson enjoyed a brief moment of celebrity during the Bush years, when he lectured Americans on the need to be firm in the defense of a British-style American empire. The poet laureate of British imperialism, Rudyard Kipling, was revived by the American neocon journalist Max Boot, who borrowed the title of his book "Savage Wars of Peace" from Kipling's racist tract in verse, "The White Man’s Burden."

Then there is the Prussian wing of the American right. In the wake of Vietnam, the late Col. Harry Summers and others presided over a renaissance of studies by American military officers of the 19th-century Prussian military intellectual Karl von Clausewitz, with such success that you can't hope to succeed as a conservative defense intellectual today if you can't tell your Auftragstaktik from your Schwerpunkt. The paleo-conservative military theorist William Lind (no relation to yours truly) favors "fourth-generation warfare" over warmed-over Clausewitzianism. Even so, he has described his position in 21st-century American politics as that of a "Prussian monarchist."

Are there no true-blue, red-blooded, 100 percent American intellectual traditions on the American right? At first glance, the Straussian school would seem to qualify. After all, Straussian scholars devote themselves to the study of the American political and constitutional tradition and they are always harping on the need to return to the ideals of the Founders and Abraham Lincoln. Among the Straussians, if anywhere, a native American conservative public philosophy might be found.

There's just one problem. They are, after all, Straussians -- not Hamiltonians, or Jeffersonians, or Madisonians. They are followers of Leo Strauss, a mid-20th-century German émigré political theorist at the University of Chicago. Strauss was a brilliant scholar who was right about some subjects and wrong about others. Straussianism, by contrast, is one of a number of academic cults that grew up around this or that European émigré in the post-1945 American academy. The cultlike nature of Straussianism is evident from the pride that many Straussian intellectuals take in delineating the apostolic succession that links them to the prophet himself. They say creepy things at conferences like "The teacher of my teacher taught" instead of "Strauss believed" or "Strauss argued." The Founders and Abraham Lincoln would have considered that kind of thing to be just plain weird.

Needless to say, not all of the schools of thought on the right agree with one another. But if their prescriptions were all followed by the U.S. at once, America would resemble a Frankenstein's monster, stitched together from the pieces of dead European ideas and dead European practices. The U.S. would combine 19th-century European classical liberalism in economics with British imperial diplomacy and Prussian military doctrine. The Declaration of Independence and the Gettysburg Address would be recited, to be sure, but in a distinctly Teutonic accent.

The effort by American conservatives to reanimate dead European doctrines brings to mind the verses that Ogden Nash wrote for "Carnival of the Animals" by Camille Saint-Saens:

At midnight in the museum hall
The fossils gathered for a ball
There were no drums or saxophones,
But just the clatter of their bones,
A rolling, rattling, carefree circus
Of mammoth polkas and mazurkas.
Pterodactyls and brontosauruses
Sang ghostly prehistoric choruses.
Amid the mastodontic wassail
I caught the eye of one small fossil.
"Cheer up, sad world," he said, and winked-
"It's kind of fun to be extinct."

Arthur Brooks and other conservatives may dread and detest modern Europe, but they should ask themselves whether there are good reasons why laissez-faire liberalism and military imperialism are discredited in their original homelands in Europe and are now fighting for life on the right wing of American politics. And they should ask themselves whether a political movement that seeks to revive the ideas and practices of premodern societies is not destined to join the models it invokes.

Michael Lind is Policy Director of the Economic Growth Program at the New America Foundation and author of "Up From Conservatism: Why the Right is Wrong for America."