Most readers find Beck's thriller a bit ... awful. One media site loved it, though! 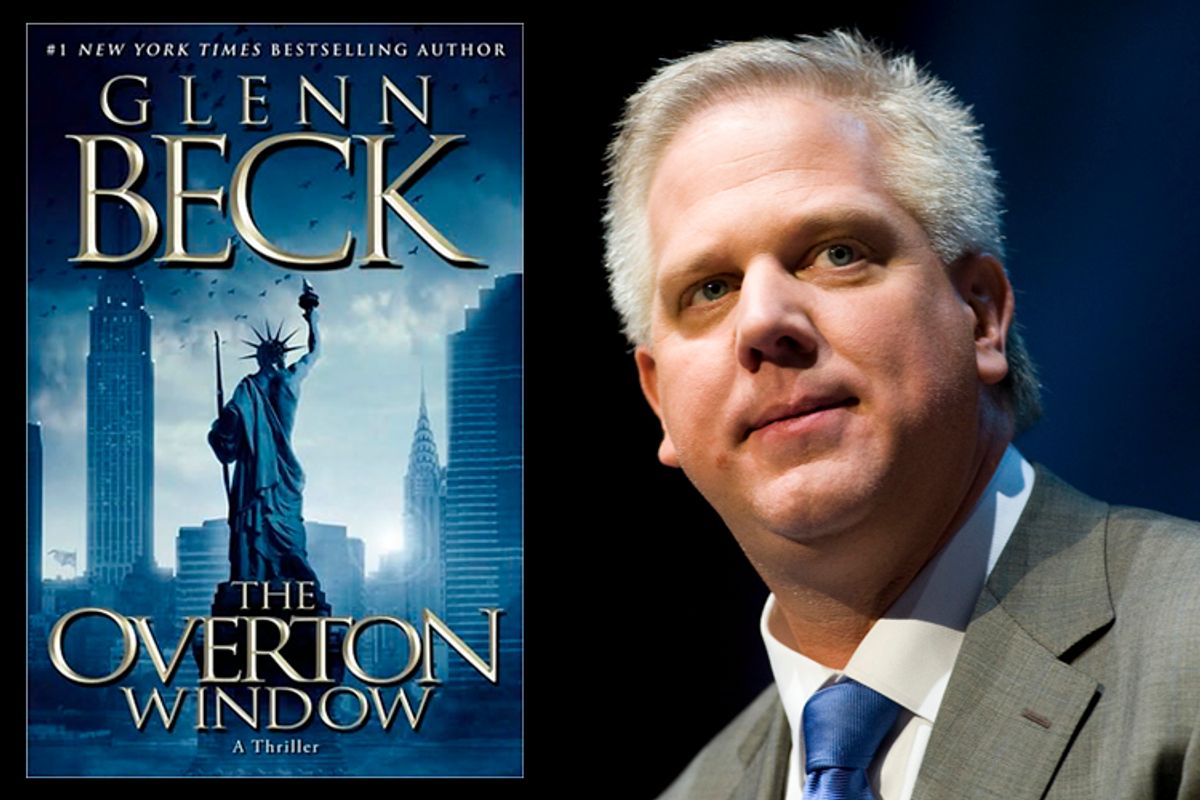 Glenn Beck's political thriller, "The Overton Window," is out today. The reviews, so far, are not particularly kind. With one exception! That exception: a website that also happened to get an exclusive interview with Beck himself.

Obviously, Media Matters was not going to give a good review to a book by Glenn Beck. But the bulk of its criticism has hardly been based on ideology, so far. It is mostly attacking the book for being terribly written:

An informant assassinated in the prologue is never mentioned again and the identity of his killer is never revealed. Beck introduces a doctor character in a mid-book chapter who performs no key role and is not heard from again.

The Washington Post review first explains the premise of the book, then gets on to the messy business of criticizing it:

Thrillers often are marred by laughable prose, but few have stumbled along with language as silly as this one. When Gardner's son, Noah, meets patriot Molly Ross early in the novel, Beck writes: "Something about this woman defied a traditional chick-at-a-glance inventory." It gets worse: When Noah notices that a few strands of Molly's hair have fallen out of place, Beck tells us, "these liberated chestnut curls framed a handsome face made twice as radiant by the mysteries surely waiting just behind those light green eyes."

The suspense of "The Overton Window" comes largely from wondering when the thrills will begin. There's the obligatory prologue murder, but then the pulse of this novel flatlines. In place of thrills, we get entire chapters in which characters lecture on the rightness of their viewpoints. A moment of cliche action erupts when a New York City taxi with Noah inside jumps a curb and nearly hits a hot dog stand. Later an atomic bomb goes off, but the mushroom cloud settles without so much as a dusty throat for anyone.

But a "review" of the book should probably grapple with the fact that it's, you know, bad.

Mediaite's Steve Krakauer's review is not quite willing to make that leap:

Between the excitement (gun fights, dramatic deaths, waterboarding!), there are lengthy speeches that sometimes last for a dozen pages or more. These are mostly the “fact” part of your “fiction” – and drag the story a bit. But it is a testament to the persuasive writing that even when the “bad guy” is speaking, the content can be very convincing. Noah’s father’s speech on the “useless eaters on the savage side of the bell curve” displays quite a different kind of patriotism.

Some characters make brief appearances and are forgotten. An ex-mercenary security guard seems like an antagonist but is gone before he’s remembered. A female doctor friend of Noah’s is around for a page. But maybe, as Beck has hinted, they’ll have bigger roles in a sequel.

Multiple passages of a dozen pages or more are tedious, but they may convince you that progressives are fascists! The book is slapdash enough that multiple characters are introduced and quickly forgotten for no apparent reason, but maybe Beck will write another book in which their creation will be justified!

The best part of this brief "review" is Krakauer's admiration for the hard work that went into a scene where Eliot Spitzer is in an elevator and leers at the female protagonist:

Most unique are the final 28 pages -- an afterward of facts to back up events and conversations in the novel. One article cited is from April 13 of this year -- a testament to how meticulous and up-to-date Beck made his thriller. And Spitzer’s in there too. As Beck notes, "Spitzer really could have run into Noah and Molly in that elevator car on the Upper East Side of Manhattan."

So Beck read that Spitzer was in the Upper East Side one day and had his team insert Spitzer into his upcoming political thriller for use in a scene that serves no purpose beyond making fun of Spitzer in a fairly unamusing way? And was doing this sort of thing two months before his book's release date? I guess "meticulous" is one way to describe it.

Maybe it's not fair for people to preemptively criticize the book because Glenn Beck's name is on it. Maybe the Washington Post is out of line to compare it to "The Turner Diaries." But this review is just a defense of the book that never bothers to argue that the book is, you know, a good book.

Shortly before this review ran, of course, Krakauer and Mediaite posted their exclusive Q&A with Beck! They asked Beck which character he saw himself as, praised his ability to insert "present-day details" into a book he clearly had his staff knock out in a month, and asked him what he thought about New York.

"You guys are like the only people really that I read about me – everybody else is so boring and trite," Beck told Mediaite!

Mediaite is the media website launched by Dan Abrams, the media consulting company CEO and NBC legal analyst described by Keith Olbermann -- apparently inaccurately, because they do not seem to like each other -- as "a fired MSNBC employee."  So congrats, Dan -- Glenn Beck likes your media website. The experiment worked! All you had to do to get an exclusive with a major best-selling author is to be consistently, entirely uncritical of everything the man does.